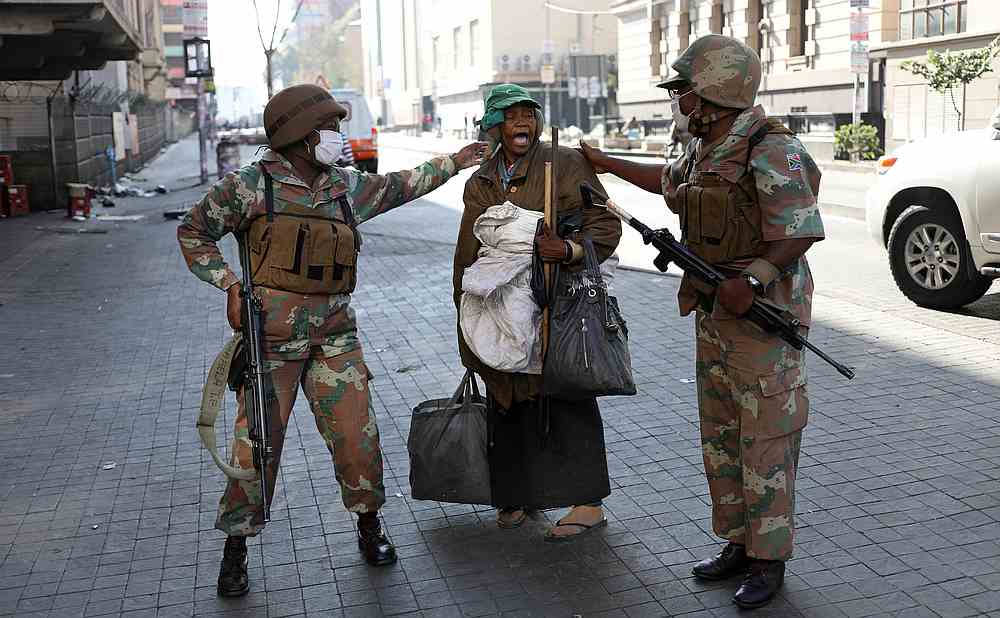 Communist South Africa Gov't Uses Virus Psyop to Further Persecute Black People
"Suddenly we all became criminals and for the first time, we had a taste of how Apartheid might have been like."
by South African Black Woman
(henrymakow.com)
The coronavirus lockdowns have affected us in various ways as Black people in South Africa.
The freedom was heavily restricted to an extent that one had feared to go out and buy essential foods because of the curfew that was in place. We were not even allowed to jog on the road, suddenly we all became criminals and for the first time, we had a taste of how Apartheid might have been like.
Most importantly, was the loss of jobs, salary ring-fencing, and labor down-sizing. A lot of people in the townships starved. The government promised them UIF which appeared to have drawbacks in terms of administration. The government introduced food parcels to the Black communities and boy, the corruption there! The poorest could not get their hands on food parcels because the counselors gave their friends. Some elites stile these parcels for resale.
Many people were arrested and humiliated by the police and the defense force.
The people who remained safe from related Corona evils were the government employees.
The people complained about the SANDF and SAPS abuse, so since we are in Level 3, they are no longer around.
We threatened to demonstrate against level 5 and 4 of lockdown. The government only heed our call due to imminet collapse of the economy
The sale of alcohol and cigarettes is still banned to the detriment of the companies that sell these things. SAB is apparently on a verge of retrenching its employees or leaving South Africa completely.
Most Black people are very suspicious of the upcoming vaccines. Apparently, things will return to normal once the vaccine has come to S.A
There's gonna be an ultimatum; either we are stuck under a lockdown or we get vaccinated. I promise you, there is going to be a war, people in the township do not trust this vaccine and most know that this virus is a scam.
----
Derick adds:
Hi, I am a white South African.  This woman is 100% correct about the Commy government. I am 83 years of age and have never seen similar kinds of Brutality by Police or Soldiers under the previous (Apartheid) Government. Unfortunately, the world only knows the propaganda and not real history.
What the lady did not say is that the only two white billionaires in the country, each donated a billion ZAR approx hundred thousand USD. This money was meant to assist small business people.
There are 750 black billionaires in the country, but only one of them donated a billion ZAR. These small businesses and farming had become the country's economic backbone when international corporations started their flight from a collapsing economy.
The gifted money was shared among the friends of the top six of the ANC dictators (yes that's right). White small biz owners who employ by far the most blacks (and pay better) did not get anything. This misdeed was upheld by the so-called supreme court when legal action was taken by white, Coloured, and Indian businessmen. The honorary blacks (Chinese businessmen), however, were lavishly helped.
What is ironic, is that many black businesses did not get help either. These businessmen/women were probably known as supporters of the opposition parties.
The Sowetan is a black-owned newspaper that used to support the ANC.  See what they wrote a week ago:   https://tinyurl.com/SowetanCritique