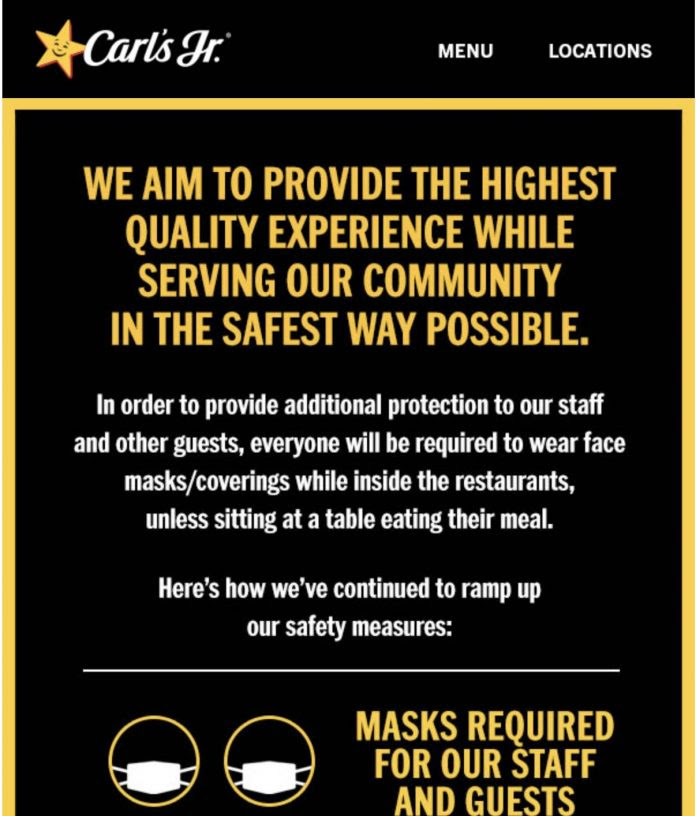 "If a store required customers to wear shoes, would you boycott it,"
a dimwitted reader responded to my Twitter call for a boycott.
The difference is that
1. There is no pandemic. COVID 19 is no worse than the common cold/flu. The death rate is less than 1/2 of one percent, mainly the aged.
2. Face Diapers are humiliating and unhealthy.  The elite (World Economic Forum) admit that the #scamdemic is a mass hallucination designed to force undemocratic social change.
How do we respond?
Below- Eric Peters urges us to boycott.
Literally everyone -- corporations, media, education, and politicians -- is controlled by the banks, who are controlled by the Satanist world banking cartel. Thought you lived in a democracy?
When confronting covidiots, it's always important to explain that the virus is no worse than the flu, hardly anyone dies and it is a trick to impose onerous changes to society undemocratically. We are Conscientious objectors, not cranks
Don't East at Carl's
by Eric Peters
We are forced to hand over our money to the government. We still have the power - and the legal right - to withhold it from businesses that don't deserve it.
One such is Carl's Jr. - the hamburger chain. Which just issued a policy decreeing that Face Diapers must be worn by employees and patrons . . . until the latter get to their anti-socially distanced tables, where they will be allowed to take them off.
This sort of ritual - in the cultic sense - is being performed at restaurants and cafes all over the country. It defies medical sense - because if "the virus" is in the air and if Face Diapers are the only thing keeping "the virus" from infecting and killing people (99.5 percent of whom never actually die) then one should never take them off.
No one should be out and about. People didn't get hamburgers when the Bubonic Plague was about. But we must pretend the Bubonic Plague is about.
It becomes even more obviously ritualistic when you take into account that literally any filthy old rag qualifies as a "face covering" - in the superciliously faux clinical language of these Diapering Decrees.
It is a performance; theater - which even High Priest of the Sickness Cult Dr. Fauci admitted - the admission now memory-holed, along with the related injunctions to not Face Diaper, now retracted.
Because it is now necessary to maintain the impression that the Bubonic Plague is in the air.
The admission still exists - on the box side of "coverings" typically on hand at the entrance to stores and other places with Diapers muss sein polices.  It says - right there - that the flimsy thing "will not provide any protection (italics added) against CFOVID-19 or other viruses or contaminants." 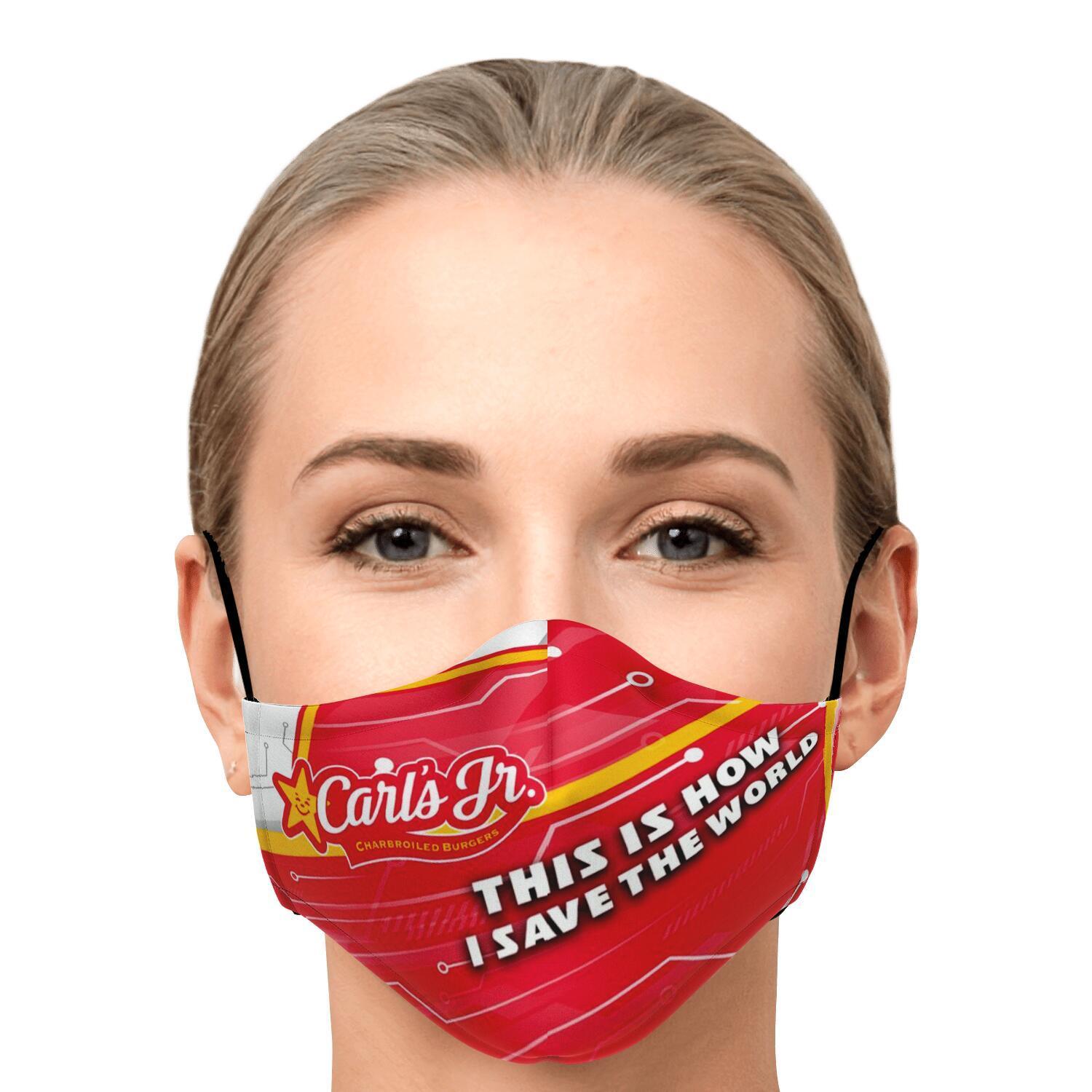 (left, Burger chain in the business of 'saving the world' for the super-rich)
And yet the wearing of one will get you through the door of Carl's Jr. Will let you be served. Will let you shop & be out and about without the Hut! Hut! Hut!
If "the virus" were actually the threat it is hyped to be then nothing less than a fitted N100 mask - regularly replaced - would be the mandatory minimum. Something that actually is medically effective against viruses - which dirty old bandanas and cheap, probably China-made (or GM-made) "coverings" aren't.
But that presents a problem because the effective masks aren't cheap and people might chafe about being "asked" to spend $25-30 or more at least once or twice a week on such a cultic symbol.
The fact that most would chafe says a lot about their belief in the threat of "the virus," too. As opposed to their intense interest to play pretend. And make sure you do, too.
Their lives aren't worth $100 a month for effective Face Diapers but they are willing to surrender their lives - and yours - for the sake of Jim Jones-like submission to a cultic ritual.
Which brings us back to restaurants like Carl's Jr. Would you eat there or at any joint that had a policy requiring you to bow your head in deference to Barack Obama while standing in line outside? Wear a ribbon in support of LBGT "rights" that you disagree exist as a condition of being served?
Dance like a Hare Krishna?
Then why do you willingly put on a ridiculous - because it doesn't serve any medical purpose - flimsy, disposable cheaply made and utterly ineffective at "keeping you safe" piece of cloth or dirty old bandana because Carl's Jr. tells you to?
You are being trained, that's why.
Rather, because you have already been trained. The donning of the filthy cloth is merely the ritual expression, very much akin to the genuflection of a Catholic before the altar upon entering the church. No disparagement intended. The Catholic is aware he is performing a ritual and he is not forced to enter the church.
We are, however, forced to eat.
Denial of food and other necessaries to those who don't perform the required rituals is a very old tool recurrently used. In Soviet Russia, it was used to starve out "enemies of the people." You ate so long as you said and did and wore the things required of that religion. Also in the other place, where a partei pin marked you out as one of the members in good standing while those not in good standing were forced to wear another article of exterior affectation.
The filthy rag, the dirty old bandana, the clinically useless "face covering" is the same thing, differently worn.
And those who try to force you to wear are undeserving of your business. If you give them your business, you deserve being forced to join the cult. And keep in mind that it's a cult you can't unjoin.
The Kool Aid line forms here - right outside of Carl's Jr.
-----

Just two months ago I wrote an article (here) about Sickness Psychosis accompanied by a photo-shopped picture of a human wearing one of those cones that vets put on dogs (and cats) to keep them from chewing on themselves, as after a surgery or because of a "hot spot."
Well, the farcical is now the actual. In Maine first and probably soon elsewhere, too.
The Gesundheitsfuhrer of Maine, Janet Mill, has decreed that restaurant workers must henceforth wear a literal dog collar, because a Diaper wasn't humiliating enough.
These must be "attached at the collar" - woof! woof! - so as to make sure that the wear understands what he's been reduced to.
How long will it be before people are required to wear a leash? Oh. Yes. That has already been trotted out . . . electronically. What else are the ankle bracelets for those who "test positive" and the use of "contact tracing" and so on?
It's no longer they say Boo and we (well, some of us) say Moo!
It is heel, doggy!
Getting sick of this yet?
...

I live in the suburbs and ride public transit downtown Seattle every day to work. Mass transit requires masks of course and I wear one when getting on the bus but take it off after seating.

Yesterday I was confronted by a large black man, (I'm white) demanding that I wear the mask. I didn't like his tone so I refused and he called on the bus driver to evict me. The bus driver looked confused and asked to come forward to discuss the issue, (he was also black). I told him that the mask had no medical utility and that it represented a political statement and he agreed with me.

His mask was under his chin but he offered me one and I refused and asked for a fare refund. He offered to compromise by allowing me to stand up at the front of the bus behind the six-foot marker. Meanwhile, the black man who protested proceeded to make disparaging remarks about me to another man who also had his mask under his chin and a cigar in his mouth!

The irony of the situation occurred to me and I was tempted to break out into Civil rights inspired songs, (We shall overcome....) but I refrained because the fellow outclassed me by at least 100 pounds. I am now motivated to become an activist but cannot find any information on a current-day chapter of the legendary Anti-Masonic Party. If you have any information on this, please forward it to me at this email address. Thank you for your resilience in proclaiming the truth.

Henry, I don't know of you're aware of this but there was an Anti Mask Leauge formed in San Francisco in 1918 that temporarily overturned the cities mandatory mask order according to Wikipedia.

Yes I’m sick of it. Have been since the first day I seen people wearing these muzzles. I have been to several places without wearing one. Sadly, I am usually the ONLY one not bowing down. I’ve gotten strange looks, a lot of “sir I need you to put your mask on” comments. But haven’t been denied any purchases.

Until today that is, a Mom pop shop with only me and the worker in the place. I was looking around and I heard a voice say “take one of these sir” I turned around with my hand ready to take a gift or sample, but when I seen it was a box with masks in it, I said I don’t wear muzzles and I just walked past him out the door. Sad it’s just sad that so many are so ignorant.