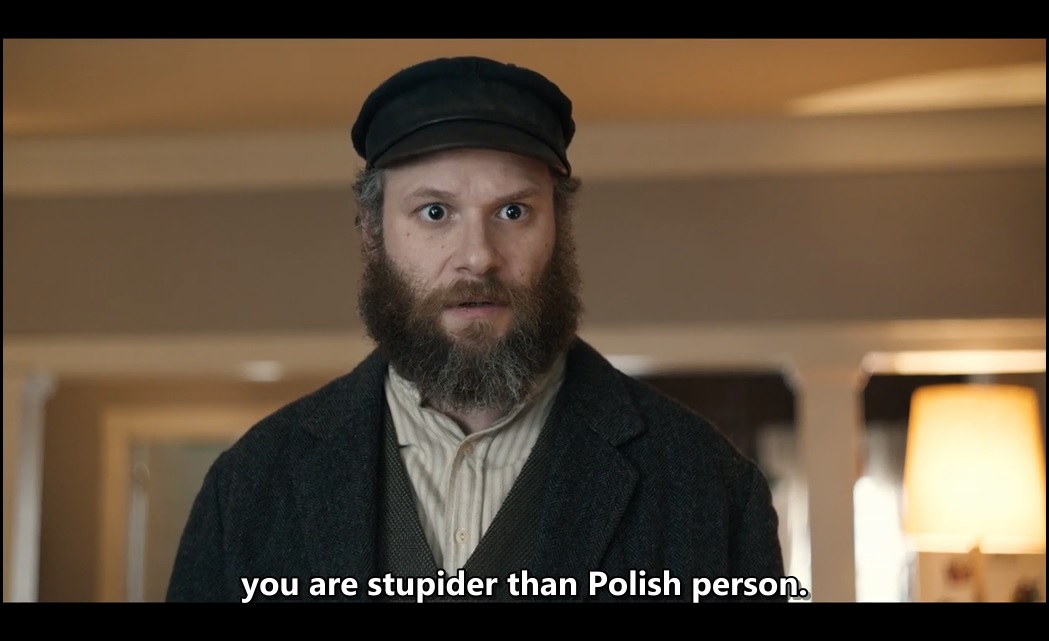 Cabalist Hatred of Goyim Displayed in "American Pickle"
Antisemitism is irrational prejudice, don't you know?
Pole expresses his disgust at latest Jewish salvo against Gentiles
by Gracjan
(henrymakow.com)
I wanted to share with you a movie I watched over the weekend....another "winner" by none other than Seth Rogan.
The movie is called "An American Pickle" and it's based on a story by Simon Rich; Seth Rogan produced it/released it via his own company.
I am a Polish-American, I came to the United States when I was 11 and was lucky enough to get my US Citizenship a year later.
Wow! 35 years ago, I didn't even realize that till now anyway, so I'm pretty Americanized with the American culture as they say :-)
I moved to Poland almost 4 years ago and reside in my beautiful home town of Gdansk. I very much welcome you if you haven't visited before. It's a beautiful city with some interesting history as you know.
I don't want to take up too much of your time, I know you're a busy man...just wanted to bring your attention to this Hollyweird filth. I made some screenshots for quick/better analysis to prove my point. It really disgusts me when Satanic Zionist Hollyweird insults, belittles, and degrades Polish people and our culture, when in reality it's quite opposite.
I am intelligent and articulate enough to see the filthy knifing tricks they play on the dumbdown masses. I'm not saying I'm the smartest man out there but I am smarter and more clever than the average pleb out there. *grin*
The "movie" is about an immigrant from Eastern Europe who is a Jew (played by Seth Rogan) who comes to America (NY) in 1919 and gets nicely preserved in pickle rhine for 100 years.
Right off the bat once he arrives in America, the first derogatory insult is flung at the Polish people. Later he compares how stupid Polish people are to his new-age relative (also played by Seth Rogan).
In one scene, the Greenbaums discuss inventor of the Polio vaccine and how "it had to take a Jew".  Later in a different scene, Seth attacks Christianity, which made me cringe with disgust!
Anyways, I didn't find this "comedy" funny at all, there was nothing funny about it or in it and I love comedies. The attack on Christianity is blatant and in full force. I also noticed that he uses the same yellow cab with upside-down satan# on the side, twice in different scenes in the movie....of all the yellow cabs in New York City, what are the odds?! I guess he must have a close relationship with the driver.