Is there any Limit to US "Debt"? 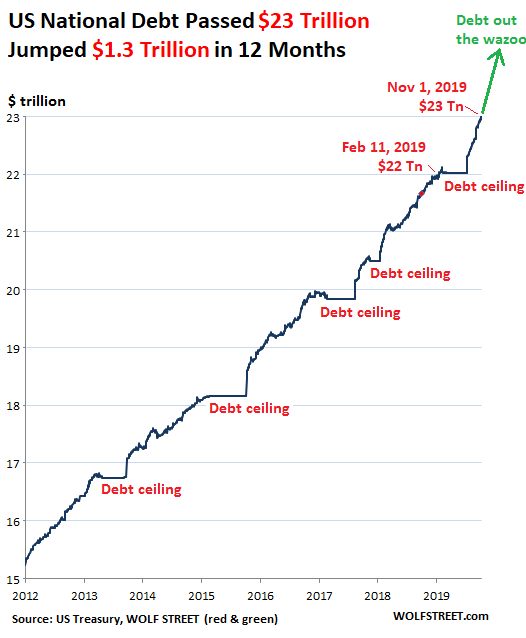 Owning gold today is like yelling fire
in a crowded theatre and hoping people
will rush to the right exit. In a crisis or crash,
they are just as likely to dump gold and
embrace the "worthless" USD.
by Henry Makow Ph.D
(henrymakow.com)
In 2000, U.S. debt was $6 trillion -- a 30% debt to GDP ratio. It was $14 trillion in 2010 and $23 trillion in 2019, increasing $1 trillion a year while the U.S. economy was booming. Or maybe this is why the economy was booming. The U.S. was charging $1 trillion a year, year after year, on its national credit card to buy things and to engineer this growth.
Since 1919, the US has created another six trillion and is considering another six. That makes $35 trillion.
"Money" is a medium of exchange that the central bankers create as a debt to themselves. It is a mental concept, a notion of value expressed in terms of some coupon (i.e. currency.)  It has no inherent value. Its value is based on its acceptance for goods or services and is linked to the "credit" of the issuing nation. Your "money" is just digits on a ledger kept by the central bankers, the same people who encourage sodomy.
The criminal cabal in charge has been producing this "money" and stuffing its pockets and those of its friends.  Is there any limit to the amount they will produce? If the "debt" doubled to $70 trillion, would it make any difference?
"Debt" is simply the money supply. It will never be repaid and shouldn't be. Interest rates are near zero so there's no limit to the amount they can create.
GOLD
Everyone thinks gold is a hedge against inflation brought on by this money creation. But there hasn't been much inflation.
Is gold really a better store of value? True it was $400 in 2000 so it has kept pace with the increased "debt." But it was actually $2200 in 1980 when the national debt was less than a trillion. Is gold just a mental concept as well?
"Doodle" wrote on a yahoo message board: "Someone help me to understand. So we have investors here in the fund saying dollars aren't worth the paper they are printed on, so are investing in GLD. But when they go to sell if they have a gain, won't they be paid in dollars? Am I missing something?" 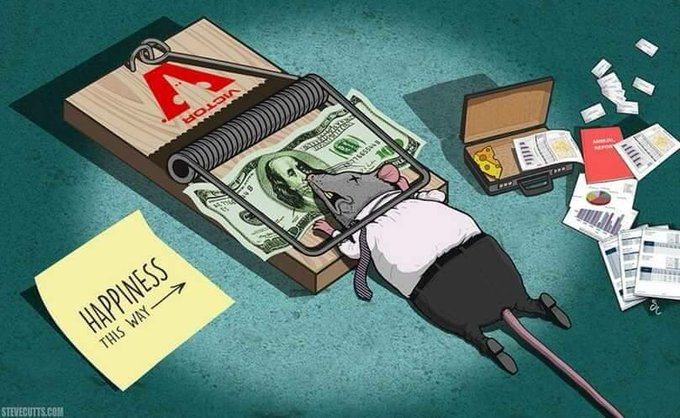 Comments for "Is there any Limit to US "Debt"? "

The argument is gold is real money, and the increase in money supply with make gold be revalued in many more dollars. Gold in Canada got up to 2800 Canadian dollars recently, but will it continue? The bulls say yes, I am not so sure. There is a good deflation argument and it goes like this: there is so much debt that when the economy crashes like it is now, millions will not be able to pay, so prices of everything will crash, and negative psychology will set in and deflation will take hold which could last decades.

Those states with hyperinflation did not have capital bond markets. Zimbabwe just printed money with more zeros, but in Amerika every dollar that comes into circulation is first by creation of debt. The world is drowning in debt, there are millions and millions of houses in forbearance right now, soon there will be millions of defaults and house prices will crash far worse than 2009. Cash will be king, gold will plunge below 1,000.

Henry - itâ€™s my understanding the real US debt is over $100 trillion since the shysters in DC have raided the Social Security reserves since LBJ and replaced with worthless IOUâ€™s. We all know itâ€™s over when the elite steal what they want, buy all the influential politicians (real fascism in the name of â€œdemocracy â€œ), and reset the world in 2021 after the election. Iâ€™ve read no doable solution thus far from all the anti scamdemic articles. Amazing just how gullible and controllable the masses really are these days.

As long as measured inflation remains low we can keep this whole system going forever because interest rates will stay low.

Again the article's main point is right on the money (pun intended) but the end of it is the forever sickening nonsense about "worthless paper fiat money" when that is what honest money was always intended to be, Not created under private ownership but belonging to the people at large at no cost for its use to anyone with legitimate government spending or even giving it into circulation to the proper ratio to exchanges occurring, thereby stabilizing its value.

These commodity people seem to have a hard time understanding that money created as a commodity DEBT, to be invested in by the privileged few for a lazy life on the backs of all who do the work and create the things they love to indulge, has no current role at all; that it is BANK CREDIT - monetized debt as a commodity to be exploited by that few- that is stealing the world blind, the very thing they seem to consider the absolute necessity. Yet bank credit has even less worth than "worthless paper" as it is simply a ledger blip, whether or not it falsely claims some sort of commodity backing.

Even if all the world's money would be gold (and therefore only a tiny few could even buy food) today it would still be LOANED into circulation with perpetual usury tied to it so long as it circulated or was hoarded. The usury exists until the principle is paid back to the bankers who loaned it, plus the demanded usury - which usury is never created, so it is eventually "paid" by borrowers handing over any property they owned to the criminal bankers.

The substance of the exchange medium is NOT the basis of the problem with the criminal banking system, it is the simple fact that the medium is CREATED AS DEBT, WORSE, AS DEBT AT USURY, which makes it both unworkable and the worst criminal scam in world history.

That scam has now, once again, reached its natural time of total collapse of all financial economy, the TRUE REASON FOR THE FAKE PANDEMIC AND THE ALREADY ANNOUNCED FINANCIAL/ECONOMIC "RESET." The same cause of most wars. But this time the two sides are that of the privileged few against the rest of us.

This is in our faces as it is not well hidden that the exceedingly rich Bill Gates, for the most obvious, is financing almost everything evil and murderous there is, yet he has also been handed multi-millions of these newly created TAX DOLLARS to help pay off all these lying governors, congressmen, doctors, media liars, police, rioters, etc. Probably Soros is also larded with either the new tax dollars and/or the bankers' new tax debt money straight from the Rothschild cabal, for which he is a gofer.

In response to your article, of course debt is unlimited. They will maintain confidence until they want to bring down the economy, and then, suddenly, the 'debt' will be the cause. Like you say, debt IS the money supply.

your questionnaire on Twitter leaves out a most important choice

in the last 3 months, the federal and provincial govt. directly deposited approx. $12,000 'dollars' to my bank account, resulting from their policies re CoronaMadness.

so a single guy like me, healthy with no dependents, was handed about a year's worth of discretionary income, all of which was hypothecated into existence, based on absolutely nothing.

with those funds, I purchase so-called "junk silver / constitutional coinage' ie. Canadian and US coins pre 1965, when these coins were still 80 and 90% real silver. In effect, I'm shorting the Canadian + US dollar, expecting hyperinflation within the year.

The day after Labor Day is the day when all the gamblers on the COMEX exchange who went short on silver, are required to deliver. There simply is not enough silver around, for them to do so. Tuesday, Sept 1 2020 will be a defining moment in American history ... when the herd notices the price of silver take off, loses confidence in the "Full faith and credit of the US of A", and the panic begins.

50 years' worth of paying attention to the money question tells me = this is it. This is the IN-evitable resolution of the debt overhang from a century of fiat currency.

As Peter Schiff likes to put it: "something which cannot go on forever, won't"

The bankers' scam has been dramatically exposed by the sudden production of vast sums to deal with the COVID "crisis". The same thing happens whenever a country becomes involved in a major war: from being so financially strapped that they can't fix a pothole in the road, suddenly unlimited funds become available to finance the means to slaughter their neighbors. The essence of money is accountancy--it is just a matter of numbers. Because of the importance of having money to the individual, he tends to think of it as having real substance; but factually it is no more substantial than the air we breathe. Of course, rationing the numbers is a great tool for the detailed control of society by oligarchs.

In Canada, I wonder how much of the supplementary $353 billion created allegedly to help people through the COVID experience will actually be used for this and how much will be expended on the pet social engineering projects of Trudeau&Co. and their hidden bosses. Awash in new financial credit, their attitude nowadays must be "Let the good times roll!"