Gary Barnett: Freedom Starts by Not Wearing a Mask 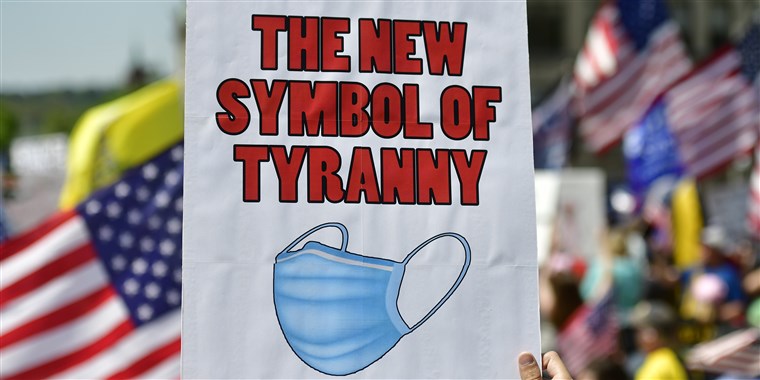 Comments for "Gary Barnett: Freedom Starts by Not Wearing a Mask"

Gary's article titled "Freedom begins when you lose the mask", is the literal truth for some people. I was recently let go from my job for getting lax on the mask requirements. Unless you have a backup plan, you may want to remain in compliance because there is no organized effort to push back on these requirements and the legal society seems to defer on the side of the government.

I havenâ€™t worn a mask but Iâ€™ll tell you it isnâ€™t without some trouble. A few days ago, I went to the bank to cash a check and they wouldnâ€™t let me in without a mask. Maybe the mask is a precursor to the 666 mark of the beast. Ironically, I went into the post office without a mask and they let me in with no problem.

The big battle is going to be the mask. I donâ€™t see these Satanic assholes letting up unless they feel the pressure. Especially the bankers.

Retail sales is going into the dumpster as many people donâ€™t want to go shopping any longer. I donâ€™t. I hate going to the store for anything. Mostly because I have to look at the people with the masks. It makes me want to throw up. I get infuriated when someone tries to talk to me with a mask on. Iâ€™m an easy-going man but this pisses me off to no end.

Clearly, the state is God trying to make itself the creator rather than being subject to his natural order. The wearing of a mask is immoral and it is a bad example of the people submitting like a bunch of sheep. No one should wear a mask under these circumstances.

f I may reply to JJ: I wonder what your definition of "work" is. Recall that in communist regimes not having calloused hands sometimes was enough to get you executed. Do you think your hands would save you from this judgment of whether you are a "worker", JJ? What about your parents or spouse--would they qualify to be permitted to live? Some people would think that much of what people in our society--such as lying politicians, prostituted media staff, subversive academics, etc.--are doing today that commonly passes for "work" is worse than doing nothing. I suspect that when you say "work" you mean something you do under someone else's control in order to obtain an income; i.e. slavery. This money-driven, abundance-thwarting system has nothing to do with a concept of work consistent with the economic precepts we have received from Jesus.

Too bad this writer has not pointed out that legitimate government is absolutely necessary but legitimate government exists FOR THE PROPER BENEFIT OF ITS CITIZENS, NOT FOR ITSELF. He is correct in that CRIMINAL GOVERNMENT, that is government which misuses its citizens for improper ends (anti all natural laws - the laws of God), IS NOT TO BE OBEYED. It is actually criminal itself to willingly obey criminal laws.

The issues of mask wearing and social distancing are nothing compared to welfare hand-outs, feminism and abortion. We lost the fight at the first welfare dollar given to a person who didn't work for it. We didn't rise up then when our tax dollars were being stolen from us and we won't rise up now