Paris Hilton represents everything that is phony about popular culture.
Her confession that her "brand" is a lie is noteworthy.
by Henry Makow PhD
There is a touching scene in Alexandra Dean's 105 min intimate documentary, "This is Paris" where Paris Hilton is seen in her room-sized walk-in closet.
Hilton confesses she hasn't worn most of the hundreds of outfits and shoes on display. She doesn't really care about any of them, and is lonely, miserable, and exhausted from the glamorous lifestyle she models for millions of fans.
Yet elsewhere, she confesses that she is addicted to money and won't feel "free" until she makes a billion.
She is trapped.
She was the first celebrity famous just for being (beautiful) and famous. She gave millions of equally untalented young women the illusion that they too can be rich, beautiful, and famous merely by taking selfies.
"The reality TV star is well known for her influence on pop culture. Paris has always been fashion-forward and is seen as a fun-loving and bubbly. Moreover, many people consider Paris to be the original 'influencer', who started many social media and pop culture trends that are prevalent today. Throughout her career, she's inspired many other celebrities, such as Kim Kardashian, Lindsay Lohan and Britney Spears." https://screenrant.com/paris-hilton-this-is-paris-documentary/
"Her net worth is reported at $300 million. Her perfume line alone has brought in over US$3 billion in revenue to date. Variety named her its "Billion Dollar Entrepreneur" in 2011. Hilton earns over US$10 million a year from her business ventures, and as of 2017, she was paid about US$300,000 for appearances in clubs and events."
Her sister, Nicky Hilton is married to Rothschild heir James Rothschild. 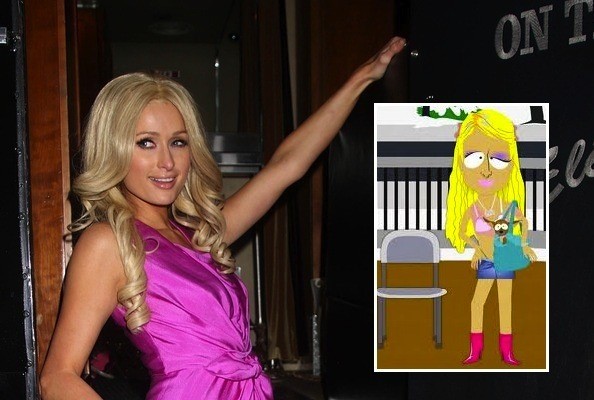 (South Park was merciless)
Hilton has come to represent everything that is slutty and superficial in popular culture. She is the object of popular derision.
But there is more to her story. She may have suffered the fate of many Illuminati children. She hints that she was sexually abused as a child and now has insomnia caused by nightmares of this abuse.
She doesn't say who abused her - a glaring omission in what is otherwise a searingly candid self-portrait. The abuse caused her to act out as a teenager. Her parents sent her to a series of "reform schools" where she was physically and emotionally abused. She spent days naked in solitary confinement. Her pleas to her parents fell on deaf eyes. She survived by focusing her mind on becoming economically independent. This inspired her self destructive money drive.
Paris Hilton is 39. She is a conventional woman at heart. She wants marriage and family.
Her "brand" is killing her. This documentary could kill her "brand."
"This is Paris"  is a courageous attempt to put her life on an honest footing. Hopefully, it will succeed.
---
Related - Hilton wanted to scrap a fight scene with a boyfriend  (scroll down)
First Comment from Anon-
Bravo Paris ! I was moved and touched by her documentary.  When I told people I was watching Paris' documentary, people immediately wrote her off --but after I explained it and showed key parts, people were shocked and shifted their opinion of her.  One of my brothers was sent to a "reform high school."   Paris's Doc. made me ask him about it and I discovered he was sexually abused -beaten, tortured, and traumatized.  It wreaked his life.  He smoked pot as a teen and my parents sent him there but the abuse he experienced destroyed his life --much more than pot ever could have.  Society writes off  "problem" kids and when they have problems all their lives --its because they were bad -a vicious cycle.   But whatever  "bad" things children do, the answer is not to abuse them - to straighten them out -- it only makes it worse and then society writes them off because they were "bad" kids from the start  .... so heartbreaking.  "Reform Schools" take advantage of this situation to abuse kids.   Thank you Henry - I never would have watched Paris' Doc. had you not recommended it.

Thanks for recommending that Paris Hilton documentary. Watched it today. Don't usually follow celebrities and their problems, but this was very eye-opening. This definitely sounds like she is an Illuminati MKUltra victim. Very shifty, emotional, and disassociated at times. I couldn't believe she was talking at one point about this program (at 1:22:38) where other celebrities besides her were abused too. The trauma is written in her face, and eyes especially. I see this in a lot of girls nowadays, unfortunately. They have literally employed MKUltra on the entire society via entertainment, media, music, art, satanic indoctrination, etc. Very sad.