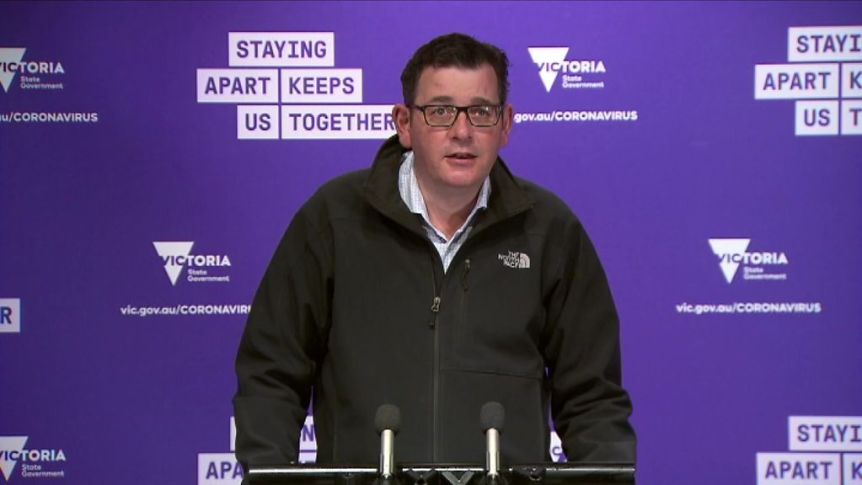 (Victoria Gauleiter Dan Andrews)
The Satanist Alpha Lodge Stands with Dan!
This is the Age of Satan; our age and the revelry is beginning.
We intend to rejoice and be glad in it.
How about you?
Aloysius Fozdyke is a Satanist insider. Ten years ago he unveiled world Satanist control.
by Aloysius Fozdyke
(henrymakow.com)
Want a sick joke?
The brave, bronzed Aussie! 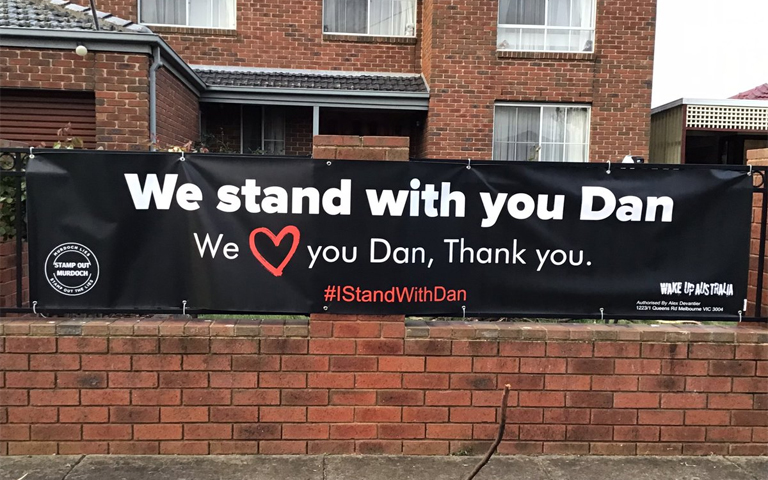 Events in Australia and elsewhere else are going so well. Compliant Australians just can't get enough and there's so much more in store for them. With businesses closed, suicide rates rising (especially of the young, but not reported in the media), food shortages looming, electronic surveillance, increased domestic violence, falling birth rates, and deaths from not seeking medical help, Aussies really have it all. Indeed, there's a whole Lockdown generation economically crippled for life. Then there's the increasing debt.
And we have a lot more to give. Australia has long been a testing ground for the rest of the world. Senior Prefect Daniel Andrews has been phenomenal and he's not even one of us! To the best of my knowledge, neither are any of his advisers, not that I'm complaining. We have so much help that's it's hard for us to give the sheeple any more than they're getting. Nonetheless, 'We Stand with Dan!'
Already the Communist Party of China refers to Australians as "the white trash of Asian", although why they restrict it to Asia is beyond me. At least they know the caliber of those they'll be ruling. Let me tell you and your readers something: the descendants of the Chinese who are yet to be born hate the guts of the white trash who are yet to be born. But Australians are really into multiculturalism and you can't get more multicultural than gifting the wealthiest (or second wealthiest) country in the world to a people with a completely different culture and language, half a world away.
The Chinese intend to turn Australia into how modern Australia began; as a big, open-air prison using facial recognition system cameras and a social credit system. Already, Australian governments are getting ready for the handover by installing Chinese manufactured facial recognition system cameras, electronic public transport cards, drones enforcing the Lockdown, mobile phone tracking, and increased police violence. Aussie white trash just can't get enough! It's the same worldwide.
As I've stated, we consistently give the sheeple what they want. And because Australian never had a revolution they're still prisoners revering their overlords. It'll just be the same prison with a new governor and warders. 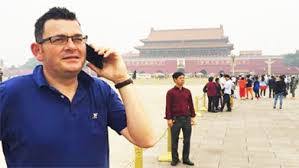 Many in the wide, brown land are socialists and Chinese communism is a lot like socialism; but it's socialism all grown up, socialism good and hard. No worries! The Chinese will allow Vichy style voting so there are sizzle and smell, just no steak. As an aside, with the Chinese government holding certified copies of all eight Australian governments forged vice-regal appointment documents - as confirmed by Charlie Falconer in 2006 - all Australian governments are beholden to the CPC as it is - ditto New Zealand and Canada.
I'm no James Bond villain telling the world of our plans. I'm a prophet bound by my God to speak so that we can't be accused of hiding anything. That aside, the federal government of the Commonwealth of Australia uses 'Defence Advisory Notices' to keep their media from reporting on our work. Same with New Zealand and Canada. Like our God, we'll exploit anything we're given, and we've been given so much.
Whilst Xtians pray to their dead deity, we work. That's why there'll be no going back to 'normal'. This is the Age of Satan; our age and the revelry is beginning. We intend to rejoice and be glad in it. How about you?
----------------------------
Related- How China Owns Australia after Buying Infrastructure, Land, Water
"How has he been able to fail to stop the virus ... (when) since the seventh of July you haven't been able to leave your house.
"More people have died in one week in Victoria than entire countries during the pandemic, yet still idiots on Twitter will say 'I stand with Dan'.
"That's called Stockholm syndrome."
https://www.skynews.com.au/details/_6186239578001
BEWARE THE CULT OF DAN Andrew Bolt, Herald Sun
Victoria's Cult of Dan is the craziest thing I've seen. So many people acting like abused wives who kiss the hands that beat them.
In Melbourne, houses fly black banners with slogans hailing Premier Daniel Andrews: "Thanks Dan, We stand with you" and "Thanks, Dan. We (heart) you."
On Twitter, #IStandWithDan is trending. "This man is the number one Premier -- He should be PM," rhapsodized one, praising the Premier of the state responsible for 90 percent of Australia's virus dead - 737 of 824.
"Chairman Dan. He's a bloody legend," declares an "aspiring human rights lawyer": "He's reminded us what real leadership looks like."
------------ 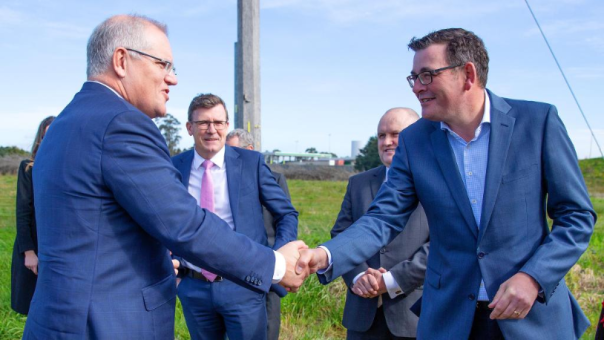 (Andrews and PM Scott Morrison in Masonic clutch)
First Comment from Phil
"Senior Prefect Daniel Andrews has been phenomenal and he's not even one of us! To the best of my knowledge, neither are any of his advisers, not that I'm complaining. We have so much help that's it's hard for us to give the sheeple any more than they're getting. Nonetheless, 'We Stand with Dan!' "
Oh, but he is one of YOU  Alloysius, by virtue of being allied to The Synagogue of Satan....aka - Freemasonry!
"A Mason is obliged by his tenure to observe the moral law as a true Noachida."

No. I don't look forward to what is coming. But Mr Fozdyke does paint an accurate picture.

Yes, there are alot of Moronic Australians who are buying this crap and will go along with anything, but not every single person is of that mindset.

As far as the I Stand With Dan signs. Yes, that is real. But I have a feeling that the sign shown was produced by The Government itself, for the sign has an Authorized by declaration at the bottom.

However, I am going to give The People of Victoria , the benefit of the doubt. I am going to say that those I Stand With Dan signs are produced by The Government themselves and then they place those signs all over town. As far as I Stand With Dan Hash tags , I would say that The Victorian Government themselves are starting those hash tags. Yes, there will be idiotic people who will promote them. But this whole thing seems to be a False Flag.

"I'm no James Bond villain telling the world of our plans. I'm a prophet bound by my God to speak so that we can't be accused of hiding anything."

Riiight. Hiding nothing. Ha ha, funniest lie ever. So they are going to hell, by own admission/lie. Even if they told us everything, it'd be like a murderer admitting his crimes. Doesn't exempt them from the final judgment. Oh, how the devil has deceived them. He always starts with the spiritually weakest ones, those who'd rather be slaves of God's slave Lucifer, than God himself, which would be freedom (from sins)

This ignorant twit, who thinks he is soooooooooo smart, had better enjoy his day in the sun as it will be relatively very, very short but the eternity following it, in which all will be properly judged and dispersed by their Creator, Who cannot be fooled, has no end.

Boy, does that ring true. My son was trained in ballet by a Chinese choreographer. A lot of his students were Chinese.

They treated me with contempt the 10 years that I was there. I tried very hard to fundraise for them and they treated me like dirt.

One day, I was going to the studio and saw their cars - Mercedes, BMW, nothing less. I looked at my 2003 Ford Focus and wondered what on earth I was doing there. I quit there and then.

Thankfully, not all Australians are like what is described here. Fozdyke sounds like a schoolboy who has successfully stolen some candy - smug, childish, and foolish - and we should not let either him or the ignorant among us influence our own views of things.

"When the blind leads the blind, they shall both fall into the ditch".

We are made in the image of God, and no matter how many forget this or do not succeed in showing it in their lives, it is true now, and always will be.