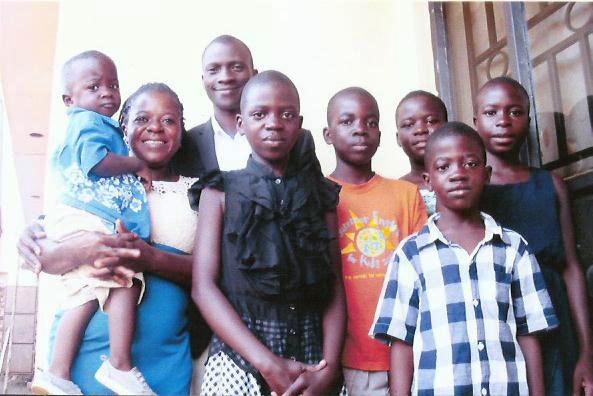 "Soft Genocide"- Blood Shortage in Uganda
by James Mubiru
(henrymakow.com)
On October 9th, my Country Uganda celebrated its 58th Independence Day Anniversary from the British Colonial rule.
The British granted independence to Uganda in 1962.Uganda was a British Protectorate from 1894-1962 and the first elections were held in Mar. 1961
The late Benedicto Kiwanuka of the Democratic Party became the first Chief Minister. So, Uganda became a Republic the following year (1962) maintaining its Commonwealth membership.
In my personal life, October 9th is my birthday, born 1978 (just turned 42years of age).
Many People in Uganda live in absolute poverty, so I have a firsthand experience living in poverty. I greatly thank all those readers of Mr. Henry Makow's Website who contributed to my family welfare. It is a great blessing that our grocery is up and running. I greatly thank Mr Henry's love and kindness towards me and my family.
We are doing better now unlike in the past when we were suffering.
As millions of people in the world (most especially those living in poor nations like Uganda), are in great suffering due to COVID-19 Scamdemic. The health sector is also hit hard. There is currently a shortage of blood donors since March this year amid efforts to curb the spread of COVID-19 Scamdemic.
Uganda currently reports blood shortages as schools closed and here students (especially those in Secondary Schools) are the largest group of blood donors. Sadly, there have been multiple death reports related to blood shortages in Uganda.
For example, Dr.Emmanuel Batiibwe, (the director of a hospital that looks after many of the poorest residents of Kampala, Uganda's Capital) recently reported that there were multiple deaths there in recent months related to blood shortages.
Dr.Emmanuel Batiibwe's China-Uganda friendship Hospital received only 18 units of a requisitioned 218 units of blood. The Head of Uganda Blood Transfusion Services, Dr.Dorothy Byabazaire told lawmakers earlier this year that her Agency collected 56,850 units of a targeted 75,000 units of blood (months of April and July).
Also the Uganda Red Cross which helps on mobilizing blood donors reported that it has not been easy to recruit blood donors due to the ongoing scamdemic. The Uganda Red Cross Spokesperson, Irene Nakasiita also said,"People don't feed well anymore. People are stressed".
She added that some willing, potential blood donors are turned away because their blood levels are too low. Currently, blood donor recruiters for blood banks in Uganda are focusing on public places as schools got closed due to the scamdemic and as i was personally taking a walk around my home area along Entebbe road yesterday, Friday Oct 9th (Uganda's Independence day and my birthday), i witnessed some tents put up by one of the blood recruiters outside next to the parking lot of one of the financial banks located in my home area.
To my surprise,there were hardly any people donating blood! The Uganda health sector is currently in blood shortage crisis and the Uganda government hospitals are urging agencies to find new ways of collecting blood in order to save lives. Haemorrhage is the number one killer of pregnant women. When there is no blood in a hospital, the risk of a woman dying in labour is very high.
According to the Programme Manager, Sarah Mutegombwa, for blood donor recruitment at the Uganda Red Cross Society(URCS)says most of the donated blood goes to children below 5 years of age. She said,"These children take at least 50% of the blood because they become anaemic when they suffer from severe Malaria and Malnutrition.
Women with pregnancy-related complications take up 30% of the demand while the remaining 20% is shared by those in need of surgical operations, trauma victims and those who suffer from chronic illnesses such as Cancer and Sickle Cell disease". So, you can see where we are heading to a very desperate situation here in Uganda. But one thing i know is doing all we can to resist these ongoing evil forces around the world.
They are after enslaving humanity. No good they see in us. Sadly we are referred to as "useless eaters".There is "soft genocide" going on.
God is our creator and the ONLY place of refuge from these evil forces.HE is a GOD of LOVE and MERCY.
Also we should strive to walk Christ-like lives in order to fight Satan and his agents. "FOR GOD AND MY COUNTRY"(Uganda's Motto) GOD IS STILL THE RULER OF THIS UNIVERSE, WHICH SIDE ARE YOU ON? The dark side or the other way round? This I testify in the holy name of JESUS CHRIST, AMEN. JAMES MUBIRU and  Family, UGANDA
--------------
--Related - Grocery Up and Running