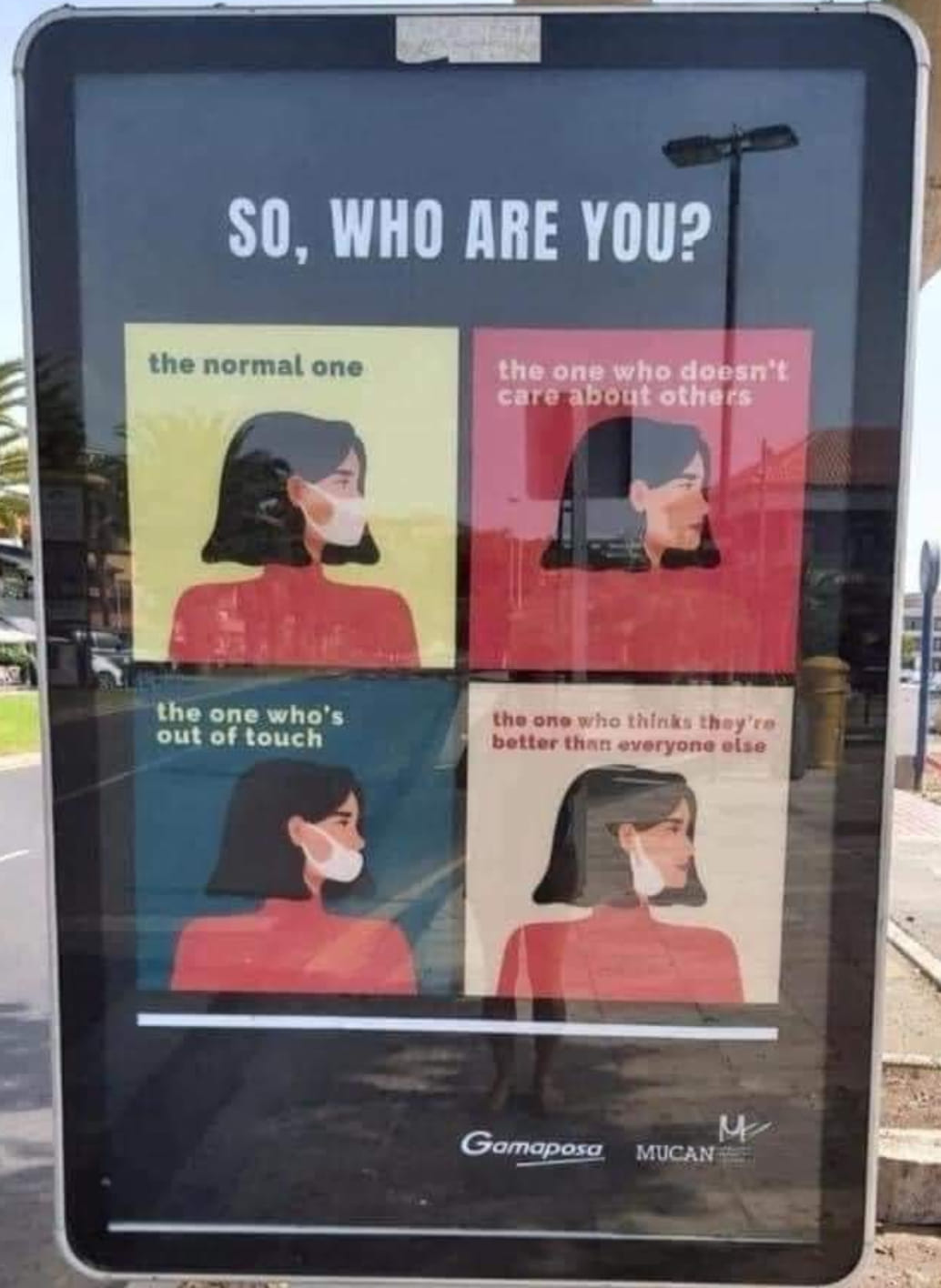 (Chinese style propaganda at bus shelter)
STATE INCITEMENT TO VIOLENCE AND SHUNNING BEGINS
"This is a dangerous time and it's only getting more so."
by Anon on FB
(henrymakow.com)
If we examine this piece of propaganda from the corporatized government, disturbing incitements to "otherize" people and even assault them are evident.
Note the weird psychological question" "So, who are you?" which is actually a profound existential question. But it gets dumbed down immediately into images of a woman executed in the stylized icons popular now from the United Nations and its network of agencies.
Normally African American or other "ethnic" images (whatever that means) are chosen, but here the person is distinctly caucasian. That a woman is chosen is disturbing on many levels, and is not by chance.
Look, no graphic artist working for a municipal government is going to come up with something like this. This is statecraft and comes from another level. Notice how wearing a muzzle over the mouth and nose is "normal."
Covering over only the mouth is "out of touch."
The one with the dangling mask is presented as a narcissist, and the one with no mask "doesn't care about others" which is an incredibly dangerous message, and especially repugnant now that the truth is coming out not only that masks do NOTHING to prevent transmission of a virus, but are actually dangerous to health and in some cases carcinogenic.
My stepson and I were verbally assaulted by a man in the Eaton Center (Toronto) yesterday as we went on the down escalator and he was going up on the other one. He yelled and yelled at us to put on our masks and that he didn't buy our "medical exemptions" and so on.
Had we be destined to step off the same escalator at the same time, it could easily have become a physical altercation. People like him are being encouraged to engage in aggression against people who have perfectly legitimate reasons not to wear a mask, including elderly people who cannot defend themselves.
Today I was treated poorly by a staff member at my local Rona building center. (Amusing when you think of the store name.) She offered me a mask in an aggressive manner and did everything but roll her eyes when I declined and mentioned my medical exemption, which happens to be legit in my case.
We can expect a lot more of this kind of thing. Be aware, and please share this awareness. This is a dangerous time and it's only getting more so.
-
Thanks K!