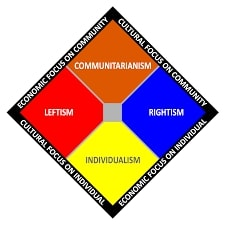 Kevin Boyle arrested:
"You are gathered in a group of more than two. This is against the law."
by Kevin Boyle
(henrymakow.com)
Here is the symbol for the new World Communism called Communitarianism. As you say, we are already trapped within this system. When all the governments of the world react as one to the mild flu we can know this. Communitarianism operates under two key principles:
1) EVERYBODY is within this system. Nobody is allowed to be outside it (see logo).
2) "THE COMMON GOOD", as a concept, has been redefined. It now works like this: "Whatever your masters define as the 'common good' IS the common good."
The system is not yet fully established. However, courts in the UK already tend to have adopted this principle. I will find out shortly how thoroughly the new rules have been installed (yes, you're right, it's Bolshevism and the "terror" is surely coming ... to deal with the likes of you and me and millions like us who recognize genuine principle and its Divine source).
ARREST I arrived early for a demo in King's Cross, Central London, last Saturday. Already one man was under arrest sitting on the pavement. This guy: https://www.youtube.com/watch?v=DUn9ltkPmOg
I would turn out to be arrest number two. I crossed the street thinking I'd turned up at the wrong place. There were very few people around but lots of police. I spoke to a woman on the far pavement asking her if she had turned up for a demo.
"No," she replied, "I'm a lawyer and I'm interested in watching how the police behave today."
Then a 7th Day Adventist old lady approached saying, "Rejoice! Rejoice! Jesus will be here soon."
An Irishwoman (accompanied by two daughters) nearby laughed at her in a friendly slightly mocking manner.
I said, "No. The lady is quite right." A Christian Minister and his wife joined the group. We were all puzzled as to what was going on. Standing in a wide circle we were asking, "Where is the protest?" A group of about 5/7 policemen approached from behind my back.
They said sharply, "Please disperse." We were all like ... "Pardon?... Why?" They "explained" for about 30 seconds.
"You are gathered in a group of more than two. This is against the law." None of us had heard of this new "law". We argued the toss. "We're standing on the sidewalk.
One of the policemen grabbed my lapel and said, "You are under arrest". Another pounced, "Put your hands behind your back." I was handcuffed while laughing. I couldn't believe what was going on, neither could anyone else. I looked at the group, now retreating, jaws hanging in disbelief.
I was put in a van and driven to a holding pen. Many others were arriving. A Father Christmas had been arrested before me, which made a comical sight though from the effs coming out of him, he'd by this time lost his Christmas spirit.
I can't even find anything about this UK "rule of two" at protests on the internet. This cannot be a law in any meaningful sense (i.e. something passed by parliament). It must be a "regulation" which does not carry the force of Law (I think, but am not sure) I will refuse to pay and see where the process ends. If the courts support this kind of gratuitous tyranny they have totally fallen into the Communitarianism camp.
My guess is that the appalling and monstrous Coronavirus Act will be cited as justification for Ministers and police chiefs to rule, whimsically, by diktat during this 'major crisis'.
The encouraging thing was how well I got on with the police in the van.
A policeman knocked on the door of our stationery, queueing van. "Do you want a cup of tea?".
The two coppers said yes and asked me if I wanted one too. "Yes please", I replied. The cuffs came off. They ordered 3 cups and it duly arrived along with biscuits which led to the most unlikely statement of the entire day, A PC leaned forward and asked,
" Do you want digestives or custard creams?"