Klaus Schwab: Humans Will be Replaced by Cyborgs

Klaus Schwab, 82, dreams of a "new normal" based on the Chinese model - a totalitarian "system management of human existence". Unfortunately, he does not dream this dream alone.
"Just as we humans have separated from our chimpanzee cousins, cyborgs will also separate from humans. Those that remain human are likely to become a subspecies. They will be the chimpanzees of the future. "
How the Chinese Communist Party and Western tech globalists sold the world a lockdown
by Aya Velasquez
(excerpt by henrymakow.com)
One of the most powerful friends of China in the west is Klaus Schwab, who has been chairman and founder of the annual elite coffee party "World Economic Forum" (WEF) in Davos for more than 30 years, and which has had close ties with the communist central government in Beijing and Chinese for more than 30 years
Schwab is an avowed transhumanist and China fanboy. Chinese officials have been attending the forum since 2009: then Prime Minister Wen Jiabao in 2009, Li Keqiang as Deputy Prime Minister in 2010, and Prime Minister in 2015. ...
Klaus Schwab also has close personal ties with China. His son Olivier Schwab is married to a Chinese woman and has headed the WEF office in Beijing since 2011. The West can learn just as much from China today as China does from the West, Schwab Junior enthused about the trade newspaper (28). Schwab Senior told the Chinese news magazine "New China TV" that China is on the right track technologically, and that the widespread acceptance and "absorption" of these new technologies, such as drone technology, also in the West, are decisive (29).
Schwab also advocates a move away from neoliberalism towards a kind of communist supernanny state in a green cloak as bait for good citizens. (30) Every citizen is transparent and unfree but is well supported by the state through digital diversion, in exchange for data, the oil of the future.
Klaus Schwab's dream is to set up a biometric, technocratic surveillance state based on the Chinese model. He is the author of several books and co-author of "Covid 19 - The Great Reset" / "The Great Reset" (31). In it, he describes the corona crisis as an unprecedented opportunity to completely restructure the world economy and all aspects of social coexistence.
For the transhumanist Schwab, artificial intelligence represents the next evolutionary stage of consciousness; he regards the vulgar human with all his weaknesses and passions as a kind of "obsolete model" of evolution. In the transhumanist bible "I, Cyborg" the transhumanism visionary Kevin Warwock puts it this way: "Just as we humans have separated from our chimpanzee cousins, cyborgs will also separate from humans. Those that remain human are likely to become a subspecies. They will be the chimpanzees of the future "(32).
Interestingly, Schwab knows very well that Corona is one of the mildest pandemics in the last 2,000 years (33) - made possible anyway only by changing the WHO pandemic definition in 2009. Nonetheless, he sees it as a welcome catalyst towards a fully digital one Transformation of society in his image, which in his eyes is long overdue. What was missing so far was a global shock event, freely based on Naomi Klein's "shock doctrine" (34). Schwab can hardly hide his enthusiasm for this "unique opportunity":
"It is our defining moment" "Many things will change forever". "A new world will arise". "The social upheaval triggered by COVID-19 will take years and possibly generations." "Many of us are wondering when things will go back to normal. The short answer is: never. "(35)
Quotes from: Klaus Schwab & Thierry Malleret: COVID-19 - The Great Reset
Schwab explains:
"In one form or another, social and physical distancing measures are likely to remain in place after the pandemic itself subsides, which justifies the decision of many companies in different industries to accelerate automation. (...) In fact, automation technologies are particularly well suited to a world in which people cannot get too close to one another or are willing to reduce their interactions. Our possibly lingering fear of becoming infected with a virus (COVID-19 or another) will therefore hasten the relentless march of automation, especially in the areas most vulnerable to automation. "(36) 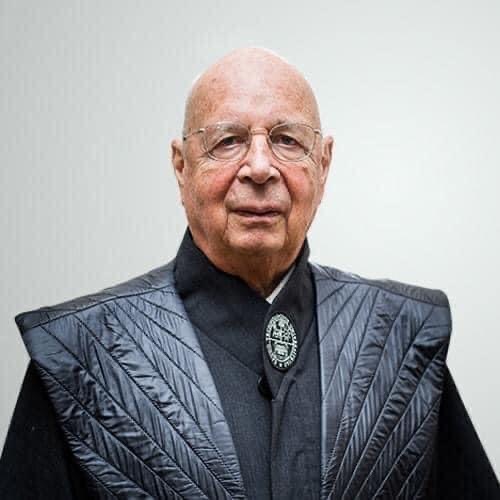 Klaus Schwab, a true Dr. Postmodern Mabuse, who likes to pose in a Darth Vader costume, fantasizes about the upcoming age of artificial intelligence: the merging of man and machine, designer babies, designer organisms, geoengineering, digital homeschooling, smart homes and cities in which everything is on an omniscient super AI is connected - a completely safe world thanks to total surveillance.
For Schwab, who says sentences like: "A world full of drones offers a world full of possibilities" (37), people represent a faceless administrative mass. He speaks of the "system management of human existence ", made possible by 'built-in' smartphones' or 'smart tattoos', which can transmit sensor data from the human body to the' Internet of Things' (IoT) or generate artificial impressions (38). Or, why not ' Smart Dust', intelligent dust that, provided with microsensors, can nestle in the human intestine, as Schwab is delighted to report:
"Smart dust, microcomputers with antennas, each smaller than a grain of sand, can now organize itself in the human intestine" (39).
What sounds like the megalomaniac feverish dreams of a psychopath is the real vision of one of the most powerful players in the world economy, the so-called "4th Industrial Revolution "(4IR). The partners in this project include big banks, Big Pharma, the vaccination alliance GAVI, insurance companies, oil companies, consulting companies like McKinsey, digital companies like Microsoft, Facebook and Netflix - and last but not least, the Chinese technology giant Huawei (40).

Comments for "Klaus Schwab: Humans Will be Replaced by Cyborgs "

As someone once said of this Corona 19 sci-fi episode, " there will be no end to this one", and I think he may be right.

If you want misinformation these days tune into the ABC, NBC, CBS, or PBS evening news where truth and reality are no longer a part of their agenda. They are still doing a poor job of selling the public on the idea of taking this vaccine or vaccines to return to the life they once had. Instead, it will be a rollercoaster of scandal and social interruptions for a long time to come.
Like the countless cases of voter fraud and irregularities this last election, they NO LONGER ACCEPT EVIDENCE AS EVIDENCE OR FACTS AS FACTS. And, this includes Codons 19. Their only objective now is to peddle a fixed partisan political agenda with hopes to get the public on board with their way of thinking.

It won't be long before God thwarts their plan to reinvent humanity. Like the Tower of Babel and the legend of Atlantis, they will be defeated.

How does anyone propose we stop this whole MONSTROCITY?