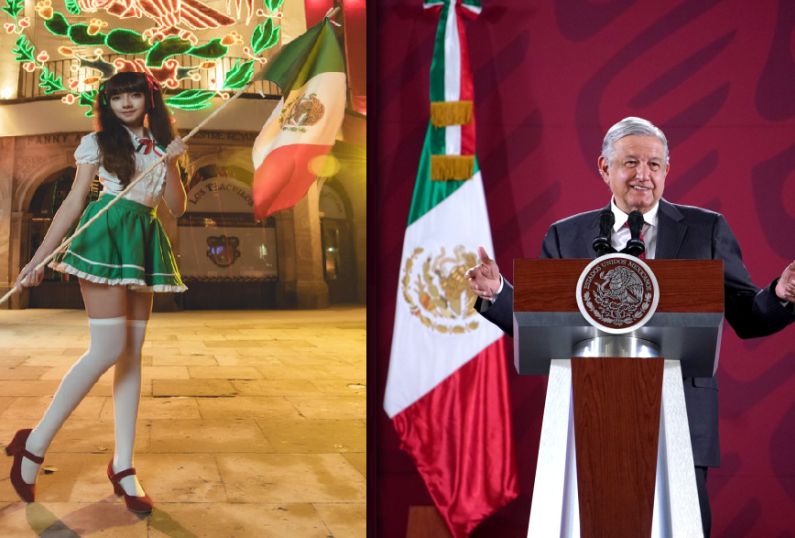 (Patriotic Mexican girl and AMLO)
Mexican Leftists Fear Biden More than Trump
Mexican leftists see potential for totalitarian tyranny by fraudulent Biden 'Left'. Envisage civil war
via Brabantian & 4chan /pol/
by Rio Grandito
(henrymakow.com)
Mexico's endemic political turbulence has sharpened the wits of its leftist intellectuals, amongst whom is Mexico's fine President AndrÃ©s Manuel LÃ³pez Obrador or 'AMLO', a democratic, socialist, but very libertarian figure.
AMLO is himself both a victim of election fraud, and a victim of 'fake news' media slanders and sidelining, so it should not surprise that AMLO is one of Trump's major sympathizers amongst G-20 leaders, despite Trump's regrettable smears against Mexicans in past rhetoric.
AMLO privately considers it likely that Trump was cheated of his victory, having many pro-Trump Hispanic voters inside the USA. Many Mexican leftists agree.
Recognizing portents from their own history, many Mexican leftists see the USA as now being pushed into a civil war scenario by the belligerence and arrogance of the USA Democratic party of Biden-Harris. They see a horrible potential for totalitarian tyranny by this fraudulent 'Left'.
Many Mexicans see the USA Democrats, as in thrall to a fake 'leftism' of billionaires, who mis-use various themes to create a set of pseudo-leftist weapons to grab power:
- The weaponising of minority and ethnicity - The weaponising and encouragement of de-stabilising migrant waves - The weaponising of LGBTq and other minorities against those who think in traditional terms of family and gender
All of the above being done to de-stabilise societies and create conflict, the disorder favouring oligarch dominance, along with creating a class of tyrannical commissars posing as 'leftists' or 'antifa' or whatever, but actually loyal to the billionaires
The USA fake 'leftists' now are so aggressive and dictatorial, with their 'cancel culture'; their humiliation and career-destroying rituals of dissident or merely traditionally-minded citizens; their brutal sweeping censorship via the billionaire tech companies - all of this is fuelling the march to civil war.
In poorer Mexico, with its often religious, often traditional and family-loving people, leftists reject and do not even have time for all this 'woke' Bolshite like fake leftist Americans. But we can see the internal USA war coming.
Likely parameters of USA civil war, per leaked USA gov't internal studies:
- Texas is likely to be the flash-point, Texans never having forgotten their 10 years as an independent nation, and Texas most threatened by border chaos, Hispanics and whites united against Washingon DC tyranny - 30% of Americans will support civil war rebels, and maybe only 10% are needed to win - 55% of military rank-and-file and government will side with the rebels. Many will stay inside the military / police / gov't to sabotage, or await their unit's moment to switch sides
- Foreign involvement is likely
- Food deliveries to USA cities will be choked off, giving the regime another problem as cities become free-fire crime zones
- Sabotaging infrastructure will doom the regime, whereas rebels can fight in the dark
- Mexico will be greatly affected, and will be a haven for escaping Americans
- Rebels will win, USA will dissolve, Mexico will become somewhat larger as majority
-Mexican areas near the border choose to join
---