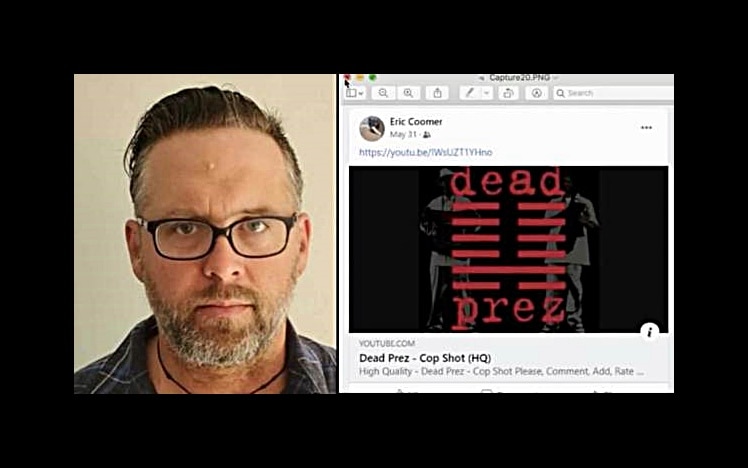 Eric Coomer, left, is the director of product strategy and security and a vice president of Dominion Voting Systems, the election service company at the center of the 2020 vote fraud.
Here is his  Manifesto listing Antifa's demands which he posted online.
"Don't worry about the election; Trump's not gonna win. I made f***ing sure of that!" he told fellow Communists.
Here he is explaining how to rig the election.  Here, he is "updating" Georgia election software days before the vote.
Is it any wonder Biden "won" despite not being able to draw a crowd, and being exposed as a traitor and criminal.  We're supposed to believe Trump didn't know about this company?
What kind of banana republic is the US?
DOMINION BOARD MEMBER ERIC COOMER: "TRUMP'S NOT GONNA WIN. I MADE F*****G SURE OF THAT!"
from Nov. 25, 2020
by Faye Higbee
(henrymakow.com)
Rabid anti-Trumper and self-identified Antifa member Eric Coomer, the current vice president of U.S. engineering at Dominion Voting Systems, admitted on social media to rigging voting machines in order to prevent President Trump from winning reelection.
In a powerful interview with Michelle Malkin, Joe Oltmann, founder of FEC (Faith Education Commerce) United, revealed how he secretly infiltrated a local Antifa chapter and overheard discussions involving "Eric from Dominion," referring to Coomer, and his role in steering the election.
Oltmann revealed that "Eric" had instructed his fellow Antifa comrades to "keep up the pressure" in their opposition to a second Trump win. When one of them responded by asking what Antifa should do if Trump wins, Eric responded with something along the lines of:
"Don't worry about the election; Trump's not gonna win. I made f***ing sure of that!"
Oltmann, who runs a data company, immediately launched his own investigation into Coomer, who it turns out has been exceptionally active on social media expressing hatred and vitriol towards the president.
Coomer not only hates the president, but he also hates those who support the president, law enforcement and people from Texas, based on his history of social media posts.
The guy also took aim at President Trump's May 11, 2017, Executive Order on the Establishment of Presidential Advisory Commission on Election, saying it was "a fraud" that needed to be shut down.
"What about Trump's Election Integrity Commission triggered Coomer?" asks Jim Hoft, writing for The Gateway Pundit.
"Was it the part about 'Vulnerabilities in voting systems and practices used for Federal elections that could lead to improper voter registrations and improper voting, including fraudulent voter registrations and fraudulent voting,' that caused Coomer to have a childish meltdown on his Facebook page?"
Part of this profanity-laden tirade by Coomer included a nasty section about how "our Cheeto-in-chief," referring to Trump, was "stocking lie after lie on the flames of [former Kansas Sec. of State Chris] Kobach."
Dominion, which is tied to both Nancy Pelosi and Dianne Feinstein, appears to have in its upper ranks a diehard Trump hater who expressed a willingness to do anything possible to prevent Trump from winning reelection.
Immediately after Trump won back in 2016, by the way, Coomer announced on Facebook that he would no longer be friends with anyone who voted for Trump, naming three specific friends whom he suspected did and urging them to "unfriend" him.
According to Coomer, only a "f***ing idiot" could ever possibly vote for "that wind-bag f***-tard FASCIST RACIST F***."
At the end of a multi-paragraph tirade filled with this type of language, Coomer added a disclaimer stating that his "opinions are rational and completely my own." He added that they "are based in reason and (are) highly credible," hilariously concluding with the statement: "I am non-partisan."
For daring to present this information on his Twitter account, Oltmann was reportedly banned from Twitter, as is usually the case whenever a bit of truth somehow slips through cracks and lands in a tweet.
Keep in mind that some 30 American states, including every critical swing state in the November election, used Dominion Voting Systems, which Coomer admittedly altered to help Joe Biden "win" instead of Trump.
"Sedition, treason, espionage all being committed by communist operatives within our government and all punishable by death," wrote one commenter at The Gateway Pundit about these latest revelations.
"Question is ... Are there any real American Constitutional Republic Patriots left in our government to see the sentences are carried out?"
--------------------------------

During the past 19 days, since November 7, Joe Biden's supposed to win, it becomes more evident that Electoral Fraud on a massive scale was carried out.

This commenced at the highest levels with The Rothschilds and their Foreign Central Banker Allies as well as Mega Banks and Multinational Corporations planning this out and it was carried out by their stooges in The Demonrat Party and other Communist Organisations and now The Biden Protection Racket (Fake News) now resorts to issuing shakedowns and applying stand over tactics to anyone who dares to expose this crime.

A Joe Biden Presidency would be a major victory to The Globo/Commie World. A Global Red Terror would definitely be on the horizon and that is just the beginning. This is even before they start committing to The Great Reset.

The only difference between this rigged election and others is that this one is way too obvious and over the top.

If they are allowed to get away with this one unscathed the Georgia Senate races in January will be a piece of cake for them with both Republican Senate candidates being guaranteed losers.

Once the Senate is lost, all bets are off. A one-party government in America will begin with the alien globalists in charge. Your constitution will be null and void and the Covid Police State will continue to override your rights and dictate your freedoms. There will no longer be any constitutional guarantees against it.

The time to take a stand is now before it's too late.