Latest!!   There's abundant evidence that Vanden Bossche has a not-so-hidden agenda.
"This has all the hallmarks of a drug-company astroturf campaign. It's another step in the decades-long erasure of the fact that our sophisticated and highly effective immune systems work well and don't need any assistance from the biomedical/pharmaceutical industry."
Vanden Bossche -- We are "at risk of resulting in a global catastrophe without equal."

A former Bill and Melinda Gates Foundation Senior Program Officer in Vaccine Discovery, former Head of the Vaccine Development Office for the German equivalent of the CDC, and university professor, has released an open letter to the scientific community and to the world warning that the present mass vaccination program may "wipe out large parts of our human population."

Dr. Geert Vanden Bossche writes in his Open Letter, which he submits to the world science community for open discussion:

"...it's becoming increasingly difficult to imagine how the consequences of the extensive and erroneous human intervention in this pandemic are not going to wipe out large parts of our human population. One could only think of very few other strategies to achieve the same level of efficiency in turning a relatively harmless virus into a bioweapon of mass destruction..."

While the science behind his explanation is somewhat complex, Bossche argues that vaccinated subjects and Covid-19 seropositve people will lose "both, their acquired and innate immune defense against Covid-19." (Dr. Bossche Open Letter post at Twitter)

The new technology in vaccines which has never before been tried on people, mRNA technology, has so far resulted, according to a reporting platform run by the CDC, in over 1,000 deaths possibly, but not for certain, related to the vaccinations, and nearly 20,000 "adverse events." The system is the Vaccine Adverse Events Reporting System. One of the best resources for following adverse events is Barbara Loe Fisher's website The Vaccine Reaction. 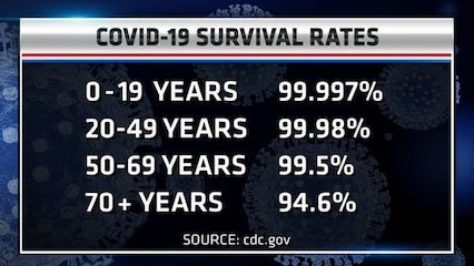 Separately, different groups of doctors and scientists have issued statements warning of the unnecessary risk of the vaccines for a 99.4% to 99.8% survival rate virus, which is similar to normal flus. For most age ranges, one has a greater chance of dying of flu than of COVID.

One group, America's Frontline Doctors, has published the white paper "On Experimental Vaccines For COVID-19". The doctors predict long-term vaccine reactions will be blamed on a "new strain."

Another group, Doctors for COVID Ethics has published "Urgent Open Letter from Doctors and Scientists to the European Medicines Agency regarding COVID-19 Vaccine Safety Concerns." One of the signatures of that letter is a former Chief Science Officer and Vice President for Pfizer, Dr. Mike Yeadon.

In January the government of Norway issued a warning over the safety of the COVID vaccines for people over 75 who are frail or had other conditions, which is exactly one of the target populations in the US.

Statement by Geert Vanden Bossche, DMV, PhD, independent virologist and vaccine expert, formerly employed at GAVI and The Bill & Melinda Gates Foundaton.
To all authorities, scientists and experts around the world, to whom this concerns: the entire world population. I am anything but an anti-vaxxer. As a scientist I do not usually appeal to any platform of this kind to make a stand on vaccine-related topics. As a dedicated virologist and vaccine expert I only make an exception when health authorities allow vaccines to be administered in ways that threaten public health, most certainly when scientific evidence is being ignored. The present extremely critical situation forces me to spread this emergency call.
As the unprecedented extent of human intervention in the Covid-19- pandemic is now at risk of resulting in a global catastrophe without equal, this call cannot sound loudly and strongly enough.
As stated, I am not against vaccination. On the contrary, I can assure you that each of the current vaccines have been designed, developed and manufactured by brilliant and competent scientists. However, this type of prophylactic vaccines are completely inappropriate, and even highly dangerous, when used in mass vaccination campaigns during a viral pandemic.
Vaccinologists, scientists and clinicians are blinded by the positive short-term effects in individual patents, but don't seem to bother about the disastrous consequences for global health. Unless I am scientifically proven wrong, it is difficult to understand how current human interventions will prevent circulating variants from turning into a wild monster.
Racing against the clock, I am completing my scientific manuscript, the publication of which is, unfortunately, likely to come too late given the ever increasing threat from rapidly spreading, highly infectious variants. This is why I decided to already post a summary of my findings as well as my keynote speech at the recent Vaccine Summit in Ohio on LinkedIn.
"Last Monday," continued
Related - Video- The Coming Covid Catastrophe
------------Letter to WHO- Stop all Vaccines Immediately! Vanden Bossche
------------Vanden Bossche Interview on Brandnewtube
------------Vanden Bossche Two-Minute Appeal to WHO