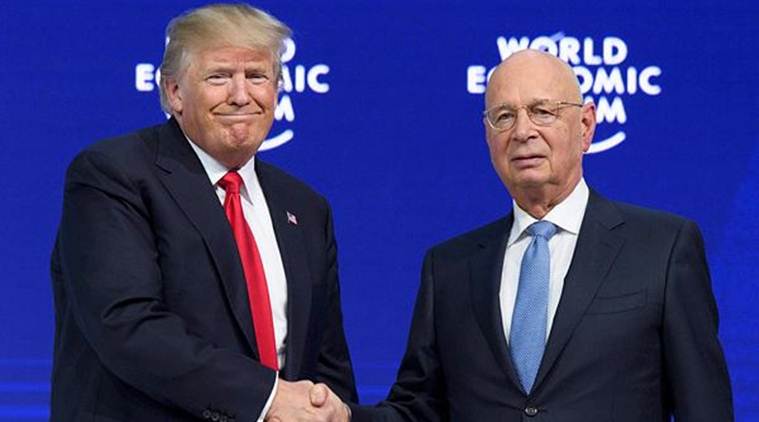 Left: Masonic handshake. They're all on the same team. They're a Cult of Ba'al and Moloch worshipers. They've been working towards World Government since the end of the Bronze Age. A 3000 year old campaign is coming to its terrifying conclusion.

The Great Reset is about the 'reset' of the Financial System. The follow up of the debt bubble, which cannot grow any longer. The coming Gold Standard has always been the Banker Plan, and will create the Greatest Depression, which will destroy what's left of the West. Gold (and probably other 'precious' metals) is the only thing that will be rising in the years ahead. Everything else, including stocks and crypto, is going to go to dust. The deleveraging is going to suck all Western markets dry, while Gold will relentlessly keep appreciating.

Exposing the Gold Standard as the Banker Plan has always been a key purpose of this website.

The New Gold Standard is the Great Reset

This 2012 article, Phoenix Rising, The Return Of The Gold Standard, opens:
"What has been in the cards for decades is now fully on the agenda: the returning Gold Standard. Gold as currency is a weapon. It is a wealth transfer to those holding Gold and will precipitate a massive deflation. The ensuing chaos will help usher in their coveted New World Order and World Currency."

And this is exactly where we stand now. The New Gold Standard is only weeks away. The debt cannot grow anymore, and it will be forcibly made to stop. They're going to force a terrible deleveraging on the West, which is going to absolutely ravage living standards in the US, Europe, and Britain and its Dominions.

The coming Depression is going to be genocidal, and will kill countless people, especially the old, and force many younger people to leave the West, looking for a semblance of a life.

What remains of the West will lie in ruins, and on the ashes, open World Government will come within five or ten years, likely preceded by the Greatest War.

It can't, and therefore there is eternal money scarcity in the System. This is solved in the current system is by having new people go into debt, and this has been the driver for eternal money growth since the War and Bretton Woods, and certainly since 1971, when Nixon closed the Gold Window, and money became fully 'fiat', in Austrian/Libertarian terms.

So money, and therefore debt, must grow about 8% per year. To finance economic growth, and interest payments on the debt. So the next question is, what does 8% per year look like, and it looks like this: 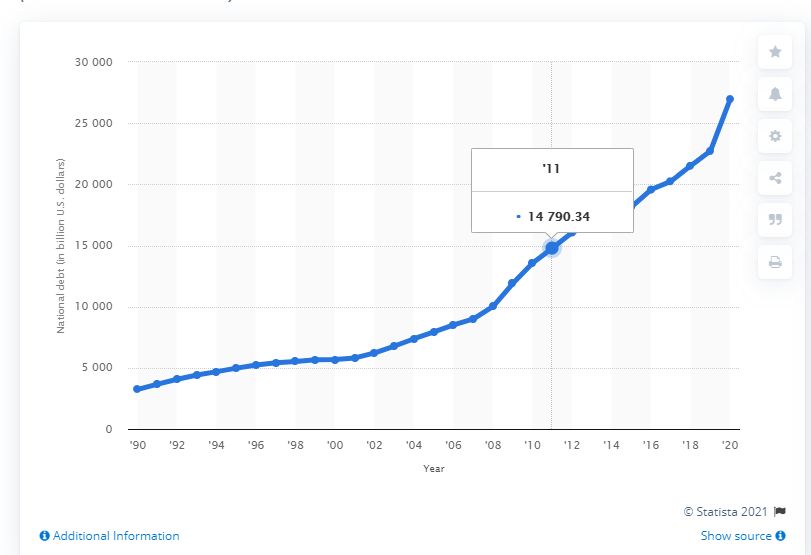 Again, this has nothing to do with Covid. It's about keeping the Financial System sufficiently liquid.

But this is the real World, and US debt is now 130% of GDP, and you don't get to play 'the Hegemon' with such debt, nor do you get to sustain deficits nearing 10% of GDP.

The problem in the Financial System is, that the real economy simply cannot support this growing debt anymore. It's not even so much the debt, it's the interest on the debt. Usury. Even today we could pay everything off with what we lose to debt service in 20 years. We've paid more in Usury over the last 25 years than we currently have debts outstanding.

So the real economy cannot take on more debt, but money must grow, and therefore it's now the US Government that is playing 'debtor of last resort', that's where the maniacal deficits of the last few years (it began already under Trump) come from.

In short: The West is broke. All the West. Europe is even worse off than the US. The Fed's balance sheet is now somewhere between 25 and 30% of GDP. The ECB's is a whopping 64%.

And this is what the Great Reset is all about: to end the growth of debt, and to force a genocidal deleveraging on the West.

The difference between Gold and the current System is simple: under Gold, they will just stop creating the money needed to finance interest payments and economic growth. But if money does not grow with 8% per year, we will have deflation of 8% per year. Only three years of it, and the economy will already be short 25% or so. And that is just the missing money growth. Debt will be so punishing (under deflation money and therefore debt becomes worth more in real terms), that people will be paying off everything they can, or default, or both. So that is going to make the deflation even much worse.

Call it hyper deflation, because that is what it is. And of course, as always, throughout history, they will sell it with fear mongering about 'hyper inflation', it's just another Orwellianism.

It's still quite difficult to get a firm handle on what the coming Gold Standard will look like. In China, one can easily see a Gold backed, and maybe even convertible Yuan coming. And that it will start surging ahead of the quickly fading Dollar very soon now. They have huge undisclosed reserves, anywhere between 20.000 and 30.000 Tons.

All bought up while the Fed was conveniently keeping prices low. This is how the Banking Cartel has been planning to migrate its main power base from the West to East.

A big story is that the BIS is implementing Basel 3 this month. The BIS previously ended the Nikkei bubble overnight, in 1989. Simply by raising capital reserve requirements for Banks. Japan never recovered, and the Nikkei is still 40% under its 1989 peak. Thirty years of deflation has ravaged society there, and fertility is disastrously low, while families are falling apart.

It's always notoriously difficult to understand exactly what the Gnomes of Basel are up to, they always keep everything obscure with banker babble. But it seems that one implication will be that Gold derivatives can no longer be counted as assets on the balances of 'financial institutions'.

This will de facto do away with Gold suppression through futures.

It's an outright, lethal stab at the Fed and the Wall Street racket that has kept Gold prices low for decades. A quote from the Zero Hedge article:

"It will force a liquidation of those positions and end any fractional reserve leveraging of gold used to suppress the price. There will still be futures markets but the whole of the gold trade will collapse back to simply coordinating supplies of gold from producers to consumers through time, like any other commodity market. In effect, Basel III, if implemented in its current form, would change the gold market from a speculative one based on perceptions of the efficacy of monetary policy to control real interest rates to one that should force price discovery in an almost purely physical market. ...., physical gold will go from being the price taker to the price maker."

So this is a more informal way of imposing Gold money on Western economies. Not exactly 'gold backed/convertible', but scarce and appreciating Gold leading price discovery. And appreciating value of money is of course as deflationary as it gets.

But whatever way it works out, the transition to Gold is going to happen. And with it, the Greatest Depression will start.

And again: it will be genocidal.

Compare the Deagel forecasts. They were pulled off the Internet a few weeks ago, but since 2014 they have been infamously predicting that the US would lose 70% of its population before 2025, and Britain 85%, and the rest of the West between a third and a half. As a result of the financial collapse.

I'm not saying that it's going to be that bad, it's too terrible to contemplate. But the very least the West is facing is a collapse like the Soviet Union went through after 1989. Millions died. Especially the old. Life expectancy plummeted to under 60.

Especially pensioners are going to get hit very hard. There will be no pensions anymore. Note that 'the virus' also targets old people. They're clearly planning to book their demise under 'covid'.

The West is sleepwalking to its doom. Most people don't even realize that the Crunch returned in September 2019. That $12 Trillion has been added to the economy by the Fed and the Government. Obsessed with 'the virus', or 'racism', or 'Bitcoin'.

It will all come with a great show, declaring victory and 'problem solved', but only months later, the first signs of money scarcity will start hitting the economy.

The Great Reset WEF style is just the distraction. We will not be eating bugs because of 'Climate Change', but because we'll be going hungry. Nor is the Lockdown the cause of the problems, it's just Martial Law to keep everybody locked up while they get financially destroyed. It's being used to transition to 'The New Economy'. New Lockdowns will be coming, when Plandemic 2 'The Bio Terror Attack' hits. The recent 'exposure' of the 'lab made' 'virus' is just the cover story, paving the way for that Lockdown.

But there is no virus. There are only Bankers. And the restart of the Crunch 21 months ago signaled their final offensive en route to World Currency and World Government.

Related:
Is There Enough Money To Pay Off Debt Plus Interest? A Closer Look
Why Tom Woods Is Wrong About The Greenbackers
Why Gold Is So Strongly Deflationary

I'm not worried about this, I'm more concerned about food disappearing off the shelves and what that will lead to. I've got months of food. Like you, I think it's smoke-maybe it will happen in five or six months, but not now.

I think EVERYONE needs to watch that link you have "There is no virus". This is not exactly new information, I've heard docs say it socially years ago. Many know of the viral scam.

The future is here. Well, the future, for most of us, is to have NO future. Time for real prayer and real worship of the true God of all was never more present.

There is a simple solution for the imminent economic hell presented below. Since ALL the debt settled on the world by the talumdic/satanic/Rothschild cabal and hangers on is CRIMINALLY FALSE all that is required for a new and great beginning is to declare the debt NULL AND VOID AT THE POINTS OF MILLIONS OF LOADED GUNS and establish national currencies, spent into circulation as needed by national governments at NO COST TO ANYONE, THERE TO STAY FOR THE USE OF ALL.

Of course, this requires HONESTY, so it is unlikely to be done unless those guns are used.