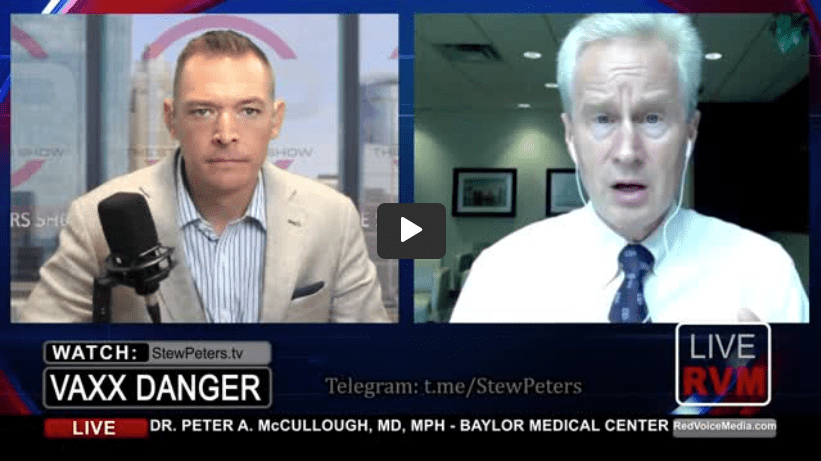 "I can tell you, as a doctor and this is my book of business. I'm in my fourth decade of doing this, I can tell you, this program should have been shut down in February, based on safety...Stew, it's going to go down as the most dangerous biologic medicinal product roll-out in human history..."
Dr Peter McCullough MD is a Professor at Texas A & M College of Medicine, President, Cardiorenal Society of America, Editor-in-Chief, Reviews in Cardiovascular Medicine, Senior Associate Editor, American Journal of Cardiology and others. He has written 46 peer-reviewed publications on COVID-19 and is considered among the world's experts on the topic, testifying in the US Senate Committee on Homeland Security and Governmental Affairs in November 2020, and throughout 2021 in the Texas Senate Committee on Health and Human Services, in the Colorado General Assembly, and in the New Hampshire Senate, concerning many aspects of the pandemic response.

Dr. Peter McCullough - URGENT WARNING About Poisonous Jabs - "An Agonizing Situation" | Stew Peters Interview  July 23, 2021
(abridged by henrymakow.com)
Dr. Peter McCullough -- "I think if we had had a data and safety monitoring board, they would have shut down the vaccine in February of 2021."

Stew responds, "25 people died during the Swine Flu vaccine. They shut it down immediately...Now, you're talking about 180-some odd deaths at one location. The CDC is now acknowledging over 12,000 deaths... So how did you come to the conclusion that these deaths or the condition of these inoculated patients was actually related to the injections?"

McCullough - "86% of the deaths have no other explanation. They're well enough to walk into an ambulatory and actually have the COVID-19 vaccine and within two days, they've died. So, it's my judgment ... that the vaccine is the cause of death in the majority of cases...

"Being coerced into taking a vaccine, which, for some people, ... will be fatal is an agonizing situation. I've never seen it in my career."

"I have a patient in my practice who has a very prominent cerebellar syndrome...she has imbalance and also has tremendous memory loss, tremor. She is absolutely not right, Stew. I've had her ten years in my practice and she was perfectly normal. She took a vaccine and within about a month, now it's progressing to the next level, she has this horrific neurologic syndrome."

The two get into the baffling symptoms presented by some, particularly the young, who are gasping for breath but whose tests appear normal and what the explanation might be.

Dr McCullough says, "Doctors in my circles, the interpretation of this is that the messenger RNA or the adenoviral DNA is taken up in the cells, the spike protein is produced in the cells, it's expressed on the cell surface and then body is attacking its own cells. The spike protein that circulates in the blood, after a few weeks, that's actually mopped-up by the circulating antibodies, which are supposed to be there...

Stew then asks him if there is a way to reverse any of this.
Dr McCullough replies, "We don't think so. I think what happens, Stew is that so many Americans patriotically went out, they volunteered to be in the vaccine program in December, January and February. We had a huge rush a people who did this. They were told that it was safe and effective. Nobody really asked what was in these vaccines and then, we started to see this evolve over time, so I think it's fine for people to change their view on the vaccine and they should, based on emerging data. The CDC keeps telling us, 'Go to VAERS.com and look for yourself, do your research. That's what we see throughout all the CDC web pages...
"We can't continue to do this and blindside Americans and people all over the world on safety. We can't ask them to take a vaccine without giving fair disclosure, fair balance on safety information."

Stew asks him if he's ever in his career seen a blank insert, such as is seen in the packaging of the vaccine vials. Dr McCullough says he hasn't and that the mechanism of that is the Emergency Use Authorization (EUA); they're not fully approved, so there is no vetted packages insert on safety information.

"It's called ISI or Important Safety Information and what the viewer should know is that when something gets fully approved, it must be fully presented with fair balance. And what we see by our government agencies is that they're taking advantage of the loosely-written EUA legislation, which doesn't indicate that fair balance needs to be presented and so they're not presenting it.

"But I've chaired over two dozen data and safety monitoring boards, with committee work - we always work in teams - I have been a part of major programs where we've had to shut it down because of safety. I've done this before. I've done this type of work, I've chaired the data and safety monitoring boards for the National Institutes of Health - in fact, I'm doing so, right now. So I can tell you, as a doctor and this is my book of business. I'm in my fourth decade of doing this, I can tell you, this program should have been shut down in February, based on safety...Stew, it's going to go down as the most dangerous biologic medicinal product roll-out in human history...

"The mechanism of action is clearly poisonous and then we know that the generation of the spike protein, itself, it damages local tissues, it's not natural for a human cell to produce this foreign spike protein. We've never asked the human body to produce a foreign protein, ever. This is so radically new to do this and to do it on a mass scale and to, let alone express on the cell surface and have the body start to attack its own cells and then, let it circulate in the bloodstream, where we know it damages blood cells and causes blood clotting.

"So the mechanism of action in the human body is so alarmingly dangerous, if you were to draw this up on a chalkboard, two years ago and say, 'You know, we're gonna do this, we're gonna give it a whirl, I don't think we could even get a human volunteer to sign up for this. I don't think I wold ever bring it forward as a product idea, even on the drawing board."

Stew asks him if he wold ever recommend the vaccine for a child and he responds, "Under no circumstances...at this point in time, I really can't recommend it to anybody...I think, at this point in time, it's fair to warn against it...I'd say, take the risks with a natural infection right now and let's treat early. We have EUA on monoclonal antibodies. They have just as good of an approval as the vaccines. We should give monoclonal antibody infusions...The vaccine, once it's in the body, we can't get it out and we don't know how to manage these complications, some of which are fatal."

When asked about the "shedding" phenomenon, Dr McCullough does think it's real but he doesn't think it persists much beyond 4 weeks, as the antibodies mop them up, which is the purpose of the vaccine.
------
Related - Dr. Peter McCullough - Covid Vaccines Have Already Killed 50,000 Americans
--------------- Inventor of mRNA vaccine says vaccination programme must be stopped immediately