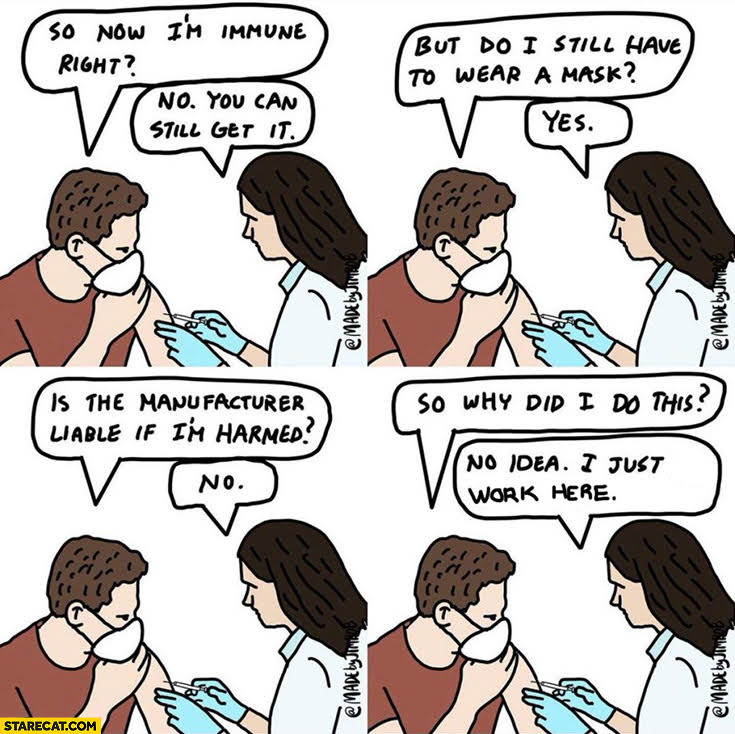 The idea of treating the vaccinated like lepers sounds harsh,
but I'm wondering, at this point, what choice do we have?
Their refusal to trust science and embrace reality endangers us all.
by Mike Stone
(henrymakow.com)
Is it time to avoid vaccinated people like the plague?

That's the sad but necessary question I'm forced to ask.

Two months ago, I made the mistake of ordering food from a restaurant where the entire staff was vaccinated. I felt ill for two days afterwards and then a bump developed on my head that is still there.
Coincidence?

Today, I sat next to a girl on a bus. I don't know for sure that she was vaccinated, but she was wearing two masks.
Seriously, she actually had two masks, one on top of the other.
What are the odds of anyone that stupid not being vaccinated? Anyway, that was five hours ago and I've had a headache ever since.
Coincidence?

Numerous reports detail women suffering miscarriages after coming in contact with vaccinated people. Others have reported feeling ill, as I did. This is a hundred times worse then second-hand smoke.

Meanwhile, the local media of Cape Cod announced that the "vast majority" of virus deaths and hospitalizations they've experienced are from vaccinated people, and the UK reports that over half of the virus deaths in their country are from the vaxxed. 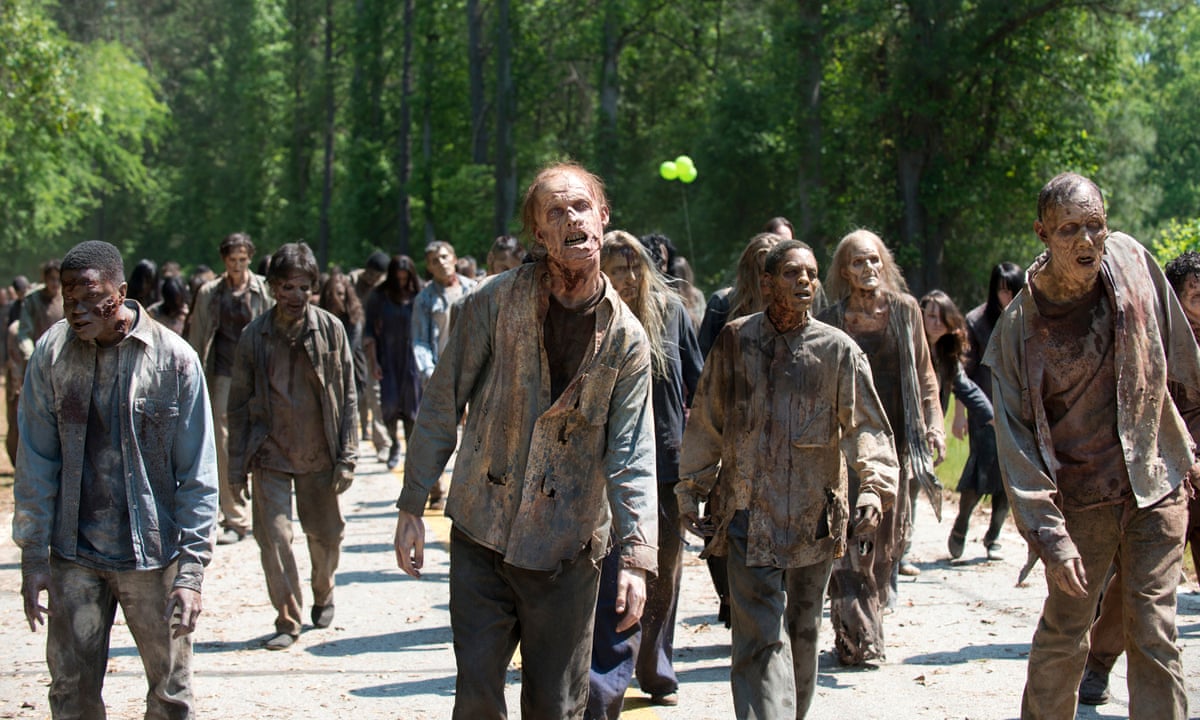 The idea of treating the vaccinated like lepers sounds harsh, but I'm wondering, at this point, what choice do we have?
Their refusal to trust science and embrace reality endangers us all.

I'm not the only one coming to this conclusion. The Centner Academy, a Jewish school in Florida, has barred vaccinated teachers from working at their school. Apparently, they have pregnant women on staff and do not want them to suffer miscarriages from being in contact with vaccinated individuals.
They're also concerned about the safety of their children. Can you blame them? And will other schools see the light start doing the same? If I had children, I would do everything in my power to keep them as far away from vaccinated people as possible.

The Flow Academy, a martial arts studio in Canada, concerned about their own safety and the safety of their members, recently announced that they will not accept memberships from vaccinated people. Can you blame them? And will other businesses see the light and start doing the same?

We know that none of the higher-ups pushing the hoax have been vaccinated. Now I'm wondering if all those internment camps we've heard about are really planned for the vaxxed.

What about the unfortunate masses who took the jab in good faith? What about children and teens who were bullied into taking the jab by their parents and teachers?

Unlike others, I do not believe that all hope is lost for someone who has taken the jab. We know that every illness, every disease, every form of physical distress in existence can be healed through natural methods. Nobody with a brain in their head disputes that. Therefore, why should this be the lone exception? It's illogical to assume it is.

Reducing and eliminating the detrimental effects of the jab will likely require a cleansing of the entire system. No time like the present to start.

Dr. Max Gerson was a renowned German doctor known for reversing cancer in terminal patients through a program of juicing and coffee enemas. If I were suffering from the ill effects of any type of vaccine, I would begin investigating his work and then go from there. I'll write more on this next week.
------------------------------
Mike Stone is the author of Based, a young adult novel about race, dating and growing up in America, and A New America, the first novel of the Alt-Right, a dark comedy set on Election Day 2016 in Los Angeles - - Available on Amazon.
Related - How Long do the Vaccinated Have to Live?
------------------Poll-80% of Unvaccinated Americans Have No Intention of Drinking the Kool Aid
------------------Western Australia Will Vaccinate People Against their Will
------------------ Adverse Reaction Reports

I am not sure what issues Mike Stone has, but he needs to stop writing since he has NO CLUE what occurs in the vaxxed! 4 autoposies have been performed on the covid deceased. There WAS NO BLOOD, WHATSOEVER , IN THE 4 BODIES!

I don't want sound like i am panicked. I am BEYOND panicked!!!

How can he even make this statement: Unlike others, I do not believe that all hope is lost for someone who has taken the jab. He has NO CLUE, those jabbed, ARE NOT HUMAN and DO NOT HAVE ANY HUMAN RIGHTS! ANY LONGER!.

You MUST watch Dr David Martin as he SLOWLY and DELIBERATLY describes the HELL the elite MOTHER FUCKERS have DONE TO ALL HUMANITY! https://www.bitchute.com/video/9HxsE5llViby/

The issues, from covid, from CHEMTRAILS is ALSO killing humanity!

It is 2021, the 3D Hell/World has TOTALLY changed, and will NEVER be the same, EVER again!

See the attached 2013 U.S.Supreme Court ruling. It WILL SHOCK THE SHIT OUT OF THE CLUELESS (99% of America & the WORLD)!

If you do NOT understand, by ALL means, EMAIL ME SO WE CAN TALK ON THE PHONE. THE END OF 3D EARTH IS HERE, NOW!

In a Supreme Court case decision in 2013 - Pathology vs Myriad Genetics, Inc - the United States Supreme Court ruled that you cannot patent human DNA as it is 'a product of nature'. However, at the end of the ruling, the Supreme Court wrote that if you were to change a human's genome by mRNA vaccines (being used currently) then the (altered) genome CAN be patented.

This means that everyone who has had the 'vaccine' is now technically 'patented'. Anything that is patented is 'owned' and comes under the definition of 'trans human'.

All people who are legally identified as being 'trans human' do not have access to Human Rights or any Rights granted by the State. That is because they are not classified as anything 100% organic or human.

Therefore, technically, anyone having this 'vaccine' can no longer have any access to Human Rights. There have been a few legal papers discussing this recently, so there should be clarification on this soon. As of now, the high court ruling stands.

To my friends and acquaintances, I’ve suggested doing this some time ago. If there are social events or get togethers, ask if anyone in attendance is vaccinated and then suggest you may have to boycott. Let the vaccinated feel the burn of their decisions. Some people are negatively affected by the shedding of others. Sad as it may be, we just may have to turn our backs on these people.

No, we do not know that everything wrong can be healed through natural methods. That's fine for naturally caused problems but we have no experience whatsoever in trying to cure a TOTALLY UNNATURAL attack on life. This jab actually CHANGES HUMAN BEINGS OR ANY OTHER LIFE, AT LEAST PARTIALLY, INTO SOMETHING THEY WERE NOT. SO FAR ALL LIFE IT HAS BEEN USED ON HAS DIED WITHIN A SHORT SPAN OF TIME.

The NFL Players Union is finally taking a stand against the ordering of illegal mandatory vaccine shots by the National Football Leaue. No one on this planet has the right to order you to take this poison or any other vaccine shot if you don't want it. They are illegally threatening to stop the players pay checks if they don't cooperate.
This garbage has got to stop. The American people still have a Constitution in place that prohibits orders like this that strip the individuals of their right to choose what goes into their body and what doesn't.