Dave Hodges - War on the Unvaxxed 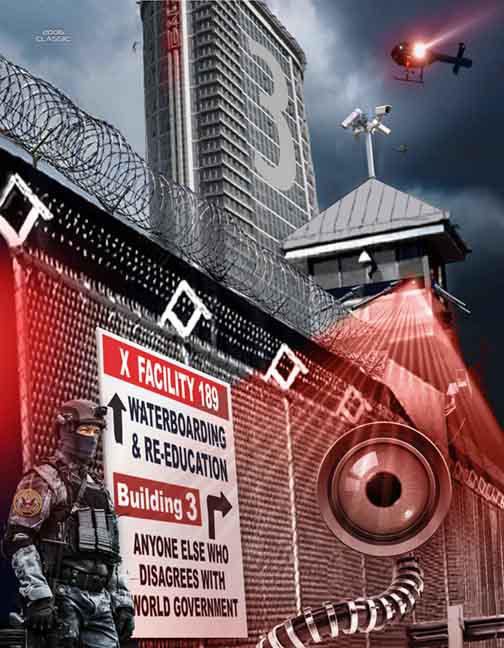 I hate to be the bearer of so much bad news but we don't have
the luxury of hiding our heads in the sand. The level of complacency is
astounding given the danger we find ourselves in.
I would love to be 100% wrong. The situation is demoralizing but we
must affirm the human (Divine) spirit in the face of Organized Evil.
Unparalleled Levels of Tyranny Coming to America From Soon-to-be Released Government Policies Regard the Fate of the Unvaxed  (Aug 26)
by Dave Hodges
(henrymakow.com)
One of my long-term sources and a colleague met with me in person. They permitted me to view and take notes about documents that are soon going to be codified into administrative law. There is nothing really surprising here. However, it is just shocking that the day of complete tyranny has finally arrived. Here is a partial report on what I have learned.

Homeland security cards indicating vaccine status are coming to America. Although it is not YET injected into your forehead or hand, it is a definitive move towards the Mark of the Beast.

I have learned from unnamed federal government sources (2) that the compliance rate will be 100%. These cards will be used for enforcement following areas:

Scanning the card to your phone to use in a public QR reader will ultimately be the way that vaccinated status is checked and it can double as contact tracing for covid or whatever the variant flavor of the week is.
Boarding an airplane.
Taking any kind of public transportation (mask included).
Buying groceries.
Entering any public or private store.
Going into federal, state and local office for any reason.
HR 1 and SB 1 will be amended to include the right to vote. There will be a grace period for illegals which will allow them to vote in 2022 and 2024.
All participants in day care- through post graduate education will be required to show their papers.
No driver's license will be issued or renewed without proof.
Eventually, public utilities will be made unavailable without your documentation.
No medical service will be available to any resister.
Emergency healthcare will be withheld without the documentation.
Compliance will be a prerequisite to obtaining or refilling prescriptions.
No marriage licenses will be granted unless both people are fully vaccinated.
No business license will be provided to unvaxxed people.
Homeschooling will soon be outlawed.
Third party acquisition of health supplements, prescriptions and groceries will be criminalized.
DUI-style roadblocks will be implemented. Each person in a car must be vaccinated, confirmed by a handheld device, or the owner's car will be impounded and sold at auction in order to cover the enforcement fees. Vaccines will be made available after scanning the passengers and driver. Following refusal, any unvaccinated person will be sent to an isolation camp along with the driver. (Note: These roadblocks were rehearsed in Colorado both on !-70 and I-25 through a joint training exercise with the Colorado State Patrol and DHS. This was during the H1N1 scare in 2009.  In the drill men, women and children boarded different busses, presumably to go to different containment facilities).
State-run CPS' will be used to separate families based upon child endangerment statutes. Vaccine status will be the ultimate driver of an action to remove a child from a parent.
Possession of firearms will be equated with being a vaccine resister. Any personal possession, or transport, of firearms will be expressly forbidden. There was nothing in the document regarding outright gun confiscation, but everything else is forbidden.

There are 30 other items, but the reader can clearly see that the ability to buy, sell or trade is blocked. There will be no exemptions, medical or religious. Citizens can arbitrarily be stopped on the street and asked for their proof of taking the jab. Anyone caught in public without the proper permission will be sent for testing and positive tests result in being sent to an isolation camp. Their actions will legally considered to be one step below manslaughter and mandatory sentencing will be demanded for repeat offenders.

In other actions by the government, contained in another document I read, Americans can expect that its citizens will "donate" labor of the government's choosing. It will become part of a "public service requirement" that will be extracted from all citizens. Further, there will be no pay for said service. However, participants' families can apply for aid under the banner of universal basic income {UBI). This is very similar to what is in Obama's Executive Order 13603.

Further, "excessive" storage of critical resources (eg food, medicine) will be outlawed beyond, as of now, an unidentified level.

Home gardeners will be required to obtain a special permit.

When these information sources are transferred to a chip placed in the forehead and/or the hand, we can be certain that we have indeed entered the final days.

I was allowed to read the document and take notes. However, I was not allowed to record in any way. The source was NOT "Wrecker" our frequent TV guest.

This source also told me that it is likely that citizens will be forced to receive biannual vaccinations against variants and new viruses.
----------------
First Comment from Mike Stone
Well somebody's going to be wrong. Dave Hodges says the vaxxed will receive the mark of the beast and go about their business while the unvaxxed will be put into camps. Others say the vaxxed will all be dead in 3-5 years. So which is it?

If the vaxxed are all dead, what is the purpose of the passports and who is going to round up the unvaxxed and run the camps?
Chad writes-
Much of this is psychological warfare is designed to defeat us mentally and spiritually. It doesn't help when we take on the outsourcing from the New World Order and do it to ourselves.

The author is practically contributing to their effort by assuming a stance of us being conquered. I simply don't share that vision. Ok, thanks for the warnings and we'll use them to adapt.

This is a wonderful opportunity. You see, the "Elites" plan all this under the assumption they can 'virtually' march their invisible soldiers into our minds and defeat us. Their entire fog and charade disappears the moment people wake up and stand up.

Save this defeatism for the slaves in society. As an American, the last thing I'm going to do is surrender and let down our Founding Fathers. They were up against the same nonsense. The people who are doing this to us are the same as those we fought back then.

The great chance we have here is to fight them all over again. There is a bloodlust which can be enjoyed on both sides. Yes, there are people in this world who understand what it means to be a sinner and violate God's laws, in the name of defending [good] life and freedom. However, these folks are on the side of the people and they are ready to give it back just as it's being given to them. We need to communicate with the good wicked out there and get them over to our side. You'll find many of them who identify as patriots and likely war veterans.

Let the sheep cave in to this nonsense. Let the "vaccines" and starvation scour them off the planet. They don't matter and never mattered anyways. There's only room on the battlefield for fighters. The rest of us warriors will eat dirt and drink the blood of our enemies to stay alive, as we drive them off the cliff.

In the meantime, learn how to fight and survive. Learn how to communicate. Don't be afraid to have conversations with the invaders they're bringing in. They have families too and want their children to go to school. They're victims in this too.

The NWO can only succeed if we allow them. They are studying our every move and looking for weaknesses and opportunities to move their chess pieces forward. We have to understand there's a chess game going on here and be in command of our pieces as well. When neighborhoods and cities have protest marches, plant food in their backyards, frontyards, and patios, that's a sign of resistance. We've been through this before and the enemy is the same.

Relish the opportunity to bloody the nose of the enemy. Drive them from their castles and put them into the dirt. Make a decision. Who's going to be the winner? It's us or them.

Comments for "Dave Hodges - War on the Unvaxxed"

Everything Hodges says seems to line up perfectly with agenda 21. Not only is everything he says appear to be very accurate there will also be biblical level famines and resource shortages. In Australia the Re-education camps will be online by the start of next year.

I've listened to Dave Hodges for a few years, sometimes he can be an alarmist(still waiting on the foreign troop invasion. but he's usually pretty solid with AZ local goings on.

Wouldn't want to be any employee of the federal, state, or local governments trying to implement this plan. It will be a turkey shoot. Especially if the enforcer is one of these...

If true all I can say is either we take the --- and die later or not take the --- or we die early because they are covering every angle of respite. If true the good news is Christ must be returning quicker than we thought, so lets get our house in order! You see the thing is as in WW2 with Hitler, people just could not believe it until it was too late. I think it must be a self protective psychological response of delusion to avoid sheer panic and mental breakdown. Normal people can not believe that other humans could be this evil simply because normal people have not become reprobate or permanently separated from God like the Satanic evil elite who are bringing this on our heads. Nevertheless, what does God the Father have to say about all this? If He does intervene now, it will be astounding in proportions! If He intervenes later via our Christ it will be earthshaking !

God depends on people to do His Will. That was his big mistake, especially when it comes to Christians.

As if Frump didn't know