Financial Expert and former White House Official, Catherine Austin Fitts, reveals how the central banking system has utilized economic turmoil during the #Covid19 pandemic, to advance a plan to centralize wealth, re-engineer the financial system. Here's what we can do to stop or survive it.
Musings by Z
(henrymakow.com)

In early Sept., 2019, Fitts gave a report on the big Central Bankers meeting in Jackson Hole of 8/2019 to discuss their intent to drop the US$ as a Reserve Currency and have all go cashless, using digital currency instead. I felt this was the trigger point. The Covid/Vaxx fiasco was the pretext to do this to us.

"I hate to hit you with a different subject, but I've been thinking about it & collecting info re it for some time & I feel we can't ignore it. This can/will kill us too & I feel it's imminent as this is part of the historic pattern used that we see played out. (Lady Gaga was wearing her Hunger Games pin at the inauguration for a reason.) I provide some info, contacts & possible solutions below. Please knock this around in your head as to think who could be tasked for this & how we might reach them for cooperation & coordination. We can't afford to be one-trick ponies in this multi-front war.

Currency Alternatives & Barter Systems - Down to a Local/County Level -

In the history of revolutions & wars, a primer for them is usually economic collapse. The vast majority of Americans are totally unprepared for this & can be easily rounded-up. Per below, this is likely to be conjoined with martial law. No digital banking will work, cash will be worthless, WalMart, etc will be closed, vast panic will ensue (esp. in the big cities), there will be more than looting & rioting - it will be mayhem & murder per S. Africa. Stores have only 3 days supply of food. The desperadoes, if they can steal gas or cars with it, will spread out some 200 mi. into rural areas for robbing. Those counties with strong sheriffs & deputies can hold it off, but what to do about no money? How can this be handled? With all the Social Media (which will be down too) people are more isolated than ever. What are the possibilities and who can lay out solutions? Basically, our own currency & barter-trading system needs to be in place, at least conceptually as part of an ad hoc civil defense force too. (Each village has a FEMA manager & many cities are now Fusion Centers, engaged in pathologizing all citizens as Pre-Crime prospects as LE have been selected based on marginal IQ.) The scenario I see is in this Force Majeure link. They set this up.

Force Majeure - US Treasury Plan for - I'm certain their martial law takeover will be as per this. The clear design with all the Covid & 'Infrastructure' debt is to totally bankrupt, and then collapse us & make a 'call' on unpayable debts, thus, we will 'own nothing' and be on UBI. Already the interest on our natl. debt is 2x total tax revenues. Other nations aren't buying our Treasuries anymore and are reclaiming their gold, as noted in the 2nd half herein. China holds the most of our IOUs & we know who set up their banking system & has the PLA at ready for invasion.

Catherine Austin Fitts, Investment Banker - She came out last fall saying that the BLM burned out properties are mostly all in Reserve Bank cities & in economic redevelopment zones where 'investors' (vultures) can pick them up for pennies & get funding for development. (Paul Singer is one such e.g.)

Solutions Fitts has proposed are separating down to the county level & doing one's own currency there as well as barter. (I think she's spot on.) She keeps repeating this tho without fleshing it out. At one point she suggested using silver coin - that's unfeasible tho b/c of lack of supply for the whole nation & it's inflated like crazy. Some form of non-counterfeitable chits will need to be made, perhaps from holograms. (Illegal, but then what isn't for the People vs. the criminals.) And, this would need to be convertible among regions (many county area) from a basket of such. States can issue gold & silver coins, which might be a way also, but they could be just coated, perhaps, as our federal ones are. Training & sourcing for barter would need to be set up too so all wouldn't panic or starve. I don't lay out all the possibilities here, just a few ideas.

BlackRock takes over Fed & Treasury - Here's info from last yr. on BlackRock's takeover. Few know this it seems.
https://www.counterpunch.org/2020/04/08/blackrock-takes-command/
Commodity-Backed Currency - Brandon Smith, etc. - This guy is a brilliant economist who developed this proposal as a way out, even on the county level it could work. It should also be the basis for our currency in the New Republic. If he & Fitts could team up to work out currency/barter survival mechanisms, many lives could be saved from starvation & we could fight the round-up along with our sheriffs. Fitts had also said she worked with William Binney on ideas for our own local/county encryption for secure communications. High Schoolers might be able to do this. Anyway, I think these minds need to get together to come up with fleshed out, workable solutions.
https://www.sott.net/article/452535-Existential-economic-threats-How-US-states-can-survive-without-federal-money 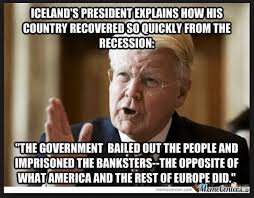 Iceland & 'Usury' Article - As you know, Iceland got out from under their banking crisis of '08 & some of that might apply for us. Perhaps have your currency traders look at it all & think about it. We need to be somewhat versed for all contingencies. KPMG Report on Sovereign Money.
Juri Lina gave 2 small gov examples of them successfully floating their own currency - a Jersey, UK, island & a Tyrol village. They prospered. I don't understand the mechanisms as the specifics aren't given. With help from your expert contacts & that of Fitts & Brandon, we might come up with something to stave off starvation, which can kill as many as any virus & cause as great a despair. I also recall an old podcast of Paul Craig Roberts on the 1-2% interest charged by some banks in South Dakota.  I don't know how they can do that, but we need to look into it, I think.
----------------------------
First Comment from Tony B
There is a simple, easily workable solution to any money problem today as practically every nation (Russia & China may now be exceptions) has sold its soul to the Rothschild cabal and that cabal's phony debt to itself as a pretense for money - true money being a medium of exchange, NOT a commodity of any kind and definitely not allowed to be misused as an investment at penalty of a firing squad for such greed.

Two steps are all that is necessary:

1.  Force government to declare ALL bank/investment debt and its notes NULL AND VOID as the criminal theft that it is.  This step takes the criminal confiscation of any property out of the hands of criminals called "bankers" or "investors."

2.  FORCE, by whatever necessary means, that whomever is running government create and set values on REAL MONEY, simple coupons to make trades easy, and for this government to SPEND into circulation this REAL MONEY until the proper ratio of money to exchanges is reached (probably a bit more than 1:1) then sustaining that ratio forever (a very simple computer program would suffice), thus stabilizing the value of that money in all exchanges, preventing both inflation and deflation.

The sticker, of course, is that THIS CAN ONLY BE ENFORCED IF A GOODLY PERCENTAGE OF THE PEOPLE THEMSELVES DO THE ENFORCING.  Concerning money, anything government is the enemy of the people as the criminal bankers own practically ALL government and practically all high officials today are banker-enticed to profit highly by "investment" as insiders to banker crimes, as everyone should have noticed by now.  In other words, the people against a small army of greedy banker loving prostitutes.

Never forget, there are one hellofa lot more of us than of them.  They are hoping, mostly through the phony pandemic, to keep down any real organization with which to depose the murdering bastards.
Z replies-
Comment to Tony B. - 'Real Money' is an illusion & to say commodities are not money is uninformed. Examples given above & below. The possibility of getting the US out of it's currency crisis lies in the value, as perceived by potential trading partners  -  chit holders -  of what it can produce which is of useable value - not chimeric paper backed by a black hole of digitalized debt. But, instead, that which can be immediately exchanged for recognized value - like JFK's redeemable Silver Certificates. We must do what Hitler did to piss the BIS off. The CBOT leading indicators are a way out. I'd pick the following as a 'basket of goods' commodities for a pegged valuation of exchange basis for non-intrinsic value 'chits' to be traded upon based upon full backing in commodity value as traded by the second at the CBOT & other such exchanges, to wit, the following commodities - (this would help w/the international trade issue which Tony B. has forgotten about with his Monopoly Board Game Money concept - Gresham's Law escape's him):

Roberta writes-
Beware of Fitts.  She has interesting things to say but . . .

She appears grounded but she is actually lost.  Why would she be seeking to know and teach others about the teaching of the esoteric occultist Rudolf Steiner.
https://spiritualscience.solari.com/rudolf-steiner/


Her spiritual guru is another esoteric. She writes:  "One person who can help us see into the heart of things and find our way forward is Thomas H. Meyer. This week, we launch Spiritual Science Academy - a website dedicated to a new course by Thomas about the work of Rudolf Steiner - Spiritual Science in the Present Age."
https://home.solari.com/176630-2/


Fitts also waxes on about a New Age, UFO writer Joseph P. Farrell.
Finally, I almost took her advice to move our money from a big bank to a credit union.  But after some research, I learned credit unions are also on the "climate change" and "sustainable investment" bandwagon.