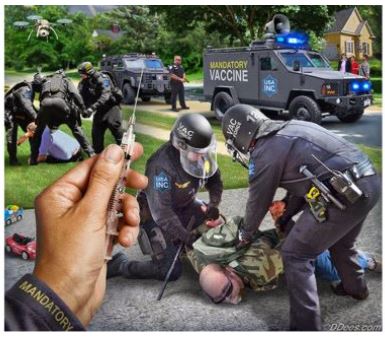 (left, Illustrator David Dees died May 31, 2020. He was truly a great visionary. Watch this doc about him.)
Americans are mostly complacent and compliant in the face of their impending demise. A pandemic with a
survival rate of 99.7% is not a pandemic. A disease with no symptoms is not a disease. Unless we regain our common sense and realize covid is a political psy op and a hoax, we are finished.
Barnett - "In order to gain freedom, one has to act free.
Freedom has to be taken, not begged for,
and this does not even require any violence or aggression;
it just requires disobedience and dissent,
and a refusal to comply with this heinous government's orders,
mandates, and corrupt attempts to control you."
Why Do I Do This?
By Gary D. Barnett
(henrymakow.com)

I have been writing about these matters concerning freedom, liberty, and the sovereignty of the individual for over two decades, and look where we are today.

I have watched as this country has continued to worsen every year since I was born, and now we face the ultimate challenge, and the only defence evident are the efforts of a minuscule few.

Yes, there is talk of pushback and some threats to not comply, but it is nothing more than talk.

There are more protests as well, at least in other parts of the world, but what is necessary is not protest after all, for protest in most cases is nothing more than an effort in futility. It is dependent on a weak population's reliance on their governing jailers giving them some relief.

In order to gain freedom, one has to act free. Freedom has to be taken, not begged for, and this does not even require any violence or aggression; it just requires disobedience and dissent, and a refusal to comply with this heinous government's orders, mandates, and corrupt attempts to control you.

The intent of the chosen and unchosen masters that have been allowed to reign over this weak and pathetic populace, have now become so bold as to be able to do as they please without scrutiny.

The ignorance of Americans has reached such a level that virtually everything the state does to gain more power and control is applauded and immediately accepted by this crowd of frightened serfs that still believe they are free. 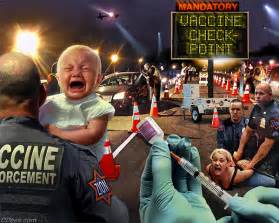 The dullness of mind that is necessary in order for this takeover of society to take place is staggering beyond the imagination of any left with the ability to think even in simple terms. I am stunned by this posture, but I am not surprised in the least.

Many have called me names, have told me I was too harsh and brutal in my approach, have said I only talked of doom, and have attempted to chastise me for telling the truth that they did not want to hear. I have been censored, threatened, shunned, and cursed, simply for warning about what is now here in plain sight. I have been labeled as a conspiracy nut, and ignored in the midst of rolling eyes. What are all these people thinking today as they watch their lives disappear?

With the mass collusion of Bill gates and the Gates Foundation, the pharmaceutical industry, the government and world 'health' organizations, and the other worst criminal elements of society, the FDA approved what are ludicrously called 'Covid vaccines' today at Pfizer and BioNTech, the first of many, and now the beginning of the end is certainly here to stay.

Within moments, New York, California, Puerto Rico, and likely more as I write this, are mandating that all get injected or else. Maybe this is a good time to say I told you so!

Get ready if not willing to be a slave, to get fully injected with deadly poison in order to survive.

Those of us unwilling to go along now are targets not only of the criminal and murderous United States dictatorship, but of all our neighbors and so-called friends.

Soon, all ability to travel, all entry into shops, restaurants, grocery stores, schools, and any number of 'public' places will be closed off to those choosing to not get jabbed, but at this point, the aggression against the real intelligent dissenters will be ramped up to a very high level. It could easily become in the very near future nearly impossible to function without compliance.

But this will not end with 'vaccine' mandates, it will end with total tyranny and death.

The frustration is maddening, as knowing where this was headed for years is no consolation considering the hell we now face.

In the days, weeks, and months ahead, this country will have changed into a totalitarian nightmare never experienced before in history.

All your children are at great risk, and I say this not to be sensational, but to warn of the destruction of the minds and bodies of all the young that has been planned and openly announced over the entirety of this fake 'pandemic' by this wicked state, and of course, it was promoted once again today by the evil Biden.

So why do I do this? Why do I write? Why do I continue in my attempts to wake up the pathetic masses? What is the point, when most are still asleep, and have no desire whatsoever to protect themselves or their families?

I do so for myself and my family, because if I do nothing, my life will have no meaning, just as the bulk of the masses' lives have no meaning. So I will continue on, but I believe this will be at great risk the longer this travesty is allowed to continue.

I will write and fight back for myself, my family, and all those that have the courage to stand up for what is right. I will defend at all costs against state aggression and never acquiesce to this state. As for those that wallow in self-pity, and refuse to speak out and disobey, that hide from the truth and expect to be protected by others, you are on your own.

This society is mentally ill to the point of total apathetic confusion.

Mass Psychosis : A killing of the Mind