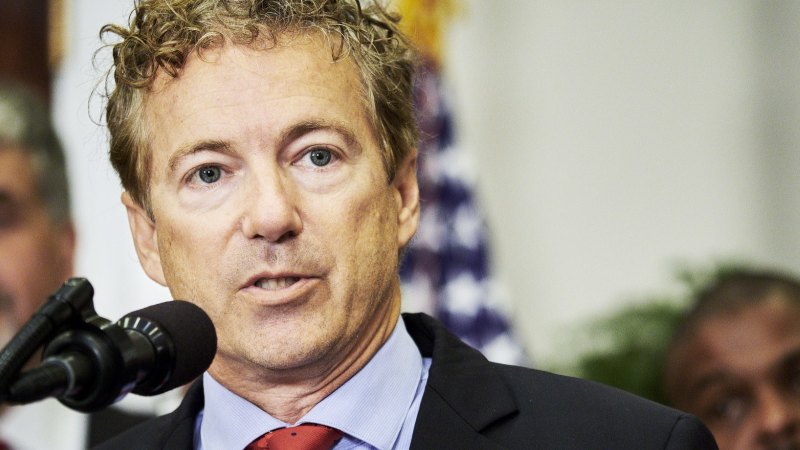 "Go outside, rip the mask off, live your life,
and ignore the dictates of tyrants like Fauci.

It's time to resist. They can't arrest us all."

Sen. Rand Paul Sent This to a Reader
"It's time to resist.
They can't arrest us all.

They can't keep all your kids home from school.

They can't keep every government building closed -- although I've got a long list of ones they should.

We don't have to accept the mandates, lockdowns, and harmful policies of the petty tyrants and feckless bureaucrats. We can simply say "no, not again."

The only way to stop these mandates is to refuse to comply.

Refuse to show "vaccine passports."
Refuse to wear a mask.
Refuse to stay at home.

Speaker Nancy Pelosi -- you will not arrest or stop me or anyone on my staff from doing our jobs.

We will not show you a passport, and we will not wear a mask.

We will not be forced into random screening and testing so you can continue your drunk with power rein over the Capitol.

I am not going to comply. This ends now!

Local bureaucrats and union bosses -- we will not allow you to do more harm to our children again this year.

Children are falling behind in school, and are being harmed physical and psychologically by the tactics you have used to keep them from the classroom last year.

We won't allow it again.

If a school system attempts to keep the children from full-time, in-person school, I will hold up every bill with two amendments. One to defund them, and another to allow parents the choice of where the money goes for their child's education.

And second, please go enjoy your life to the fullest, and ignore the mandates from King Fauci and his minions.

I'm sure I will receive an enormous amount of political blowback for this stand that I'm taking, but I don't care. It's that important.

That's why I need you to be a part of this.

It's not enough for one man to take a bold stand like this -- we all have to do it together.

It's never easy to put out a call for resistance against the most powerful bureaucrats in our country.

But there are certain moments in history where it's necessary.

Whatever blowback I receive from this, it's worth it to save America from tyranny.

But I do need you to stand with me.

And second, go outside, rip the mask off, live your life, and ignore the dictates of tyrants like Fauci.

It's time to resist. They can't arrest us all.

P.S. The only way to defeat King Fauci and his minions is to ignore them. It's time to resist.

We don't have to accept the mandates, lockdowns, and harmful policies of the petty tyrants and feckless bureaucrats. We can simply say no.

I'm sure I will receive an enormous amount of political blowback for this stand that I'm taking, but I don't care. It's that important.

I do need you to stand with me, however.

And second, go out and live your life freely. Say no to King Fauci.
----------------------
Related - Largely ignored in the US Media, this Coverage appeared in The Daily Mail
------------ Paul Slams authoritarian no-fly lists
Thanks Mike C!
First Comment from Ken Adachi
I was very happy to see Rand Paul take a stand and say something that needs to be said and shouted from the rooftops. Many leading voices who helped expose the Covid Death Jab agenda starting in early 2020, such as Dr Carrie Madej or British Nurse Kate Shemirani, had repeatedly said in all of their talks that 'if only enough people would simply NOT comply and not obey these idiotic mandates' that the entire agenda would collapse upon itself because there are FAR more people than there are  'compliance' enforcement robots. They can pass out obscenely large 'fines' until they're blue in the face, there is NO legal basis in LAW for ANY of these so-called dictatorial edicts/fines whether from a Prime Minister, Governor, Mayor, or 'Health' Department Deep State stooge.

It's mind numbing how many people are willing to throw away their very life because some sold-out, whore politician or corporate suit-filler, who doesn't know his ass from a hole in the wall about what's in those Covid Death Jabs - tells them they MUST take the Killer Vaccicution in order to go to school or keep a job, etc., etc., based on WHAT?

Real evidence that the "vaccine" is 'safe & effective'? ...No Proof of a genuine 'pandemic,' with massive loss of life like the Black Plague? ...No Evidence that ONLY a vaccine can address this fantasy/hoax pandemic? ...No

A lot of people are going to die needlessly in the very near future because they listened to mainstream propagandists or political traitor-whores or school 'officials' or nursing home operators, or CEOs of ruthless corporations who will do or say ANYTHING to please the Cabal Boys.

Before it comes down to a shooting showdown, if EVERYONE simply stopped wearing their masks, no matter where they went, and stopped even THINKING about injecting that Killer Vax based on ANY sort of coercion or threat, hugged their relatives and instead got BUSY going AFTER the coercion pushers, the vaccine promoters, the covid hysteria propagandists of every stripe and venue, and went for their throat - in every legal way possible, you would start seeing a change - and quickly. Yes, they will double down - they ALWAYS do. But it won't matter because the public will double and then triple-down on THEM, until THEY get it.

It's time to get off your hands and help SAVE your country. The next 'round' of compliance may well include permanent residency at a FEMA detention/execution  center near you.
--------
Jesse wrote- 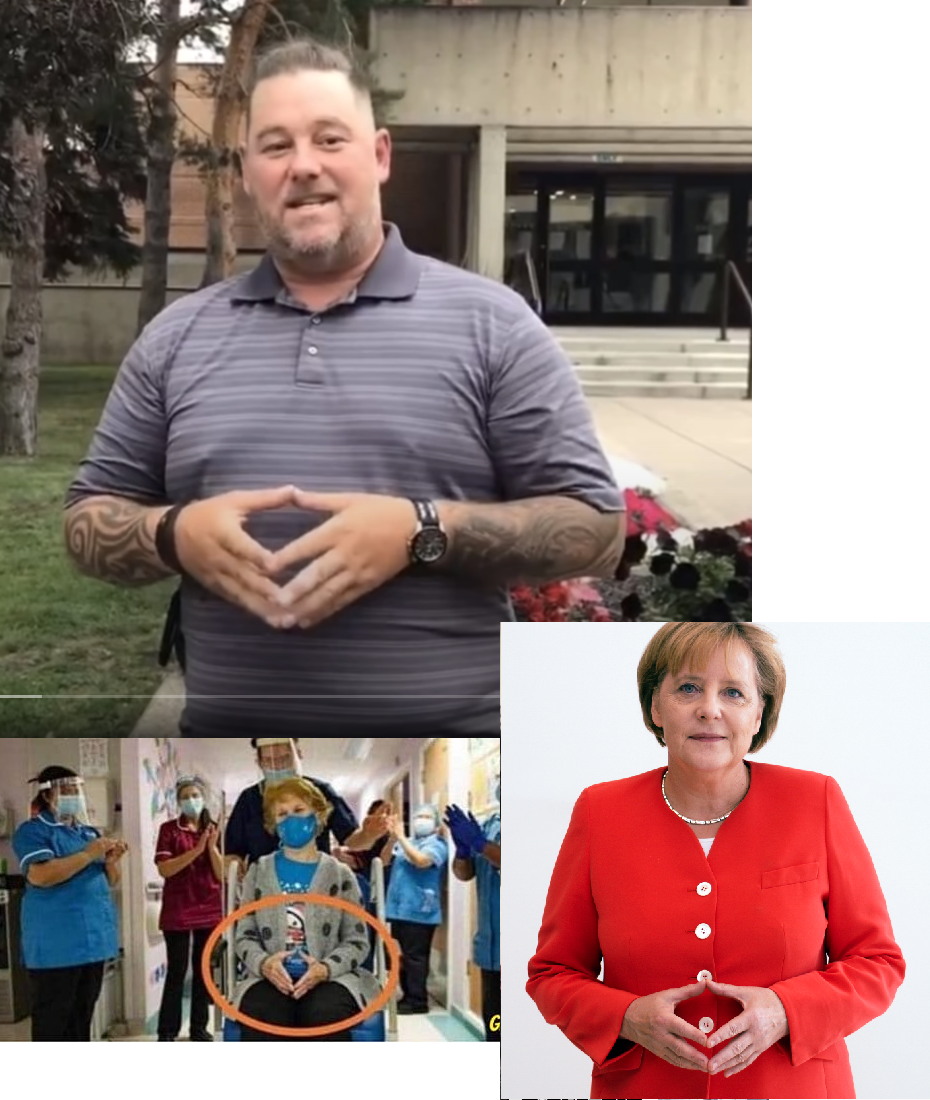 A few people have pointed that people like Ron DeSantis, Rand Paul, Greg Abbott and others may only be playing a part of yet another layer of conspiracy. There's virtually no chance that these people are NOT freemasons. Also notice the amount of New Agers within the truther community, just as you pointed out with the article "Some Prominent Anti-Vaxers May Have Masonic Ties".

This is a picture of Patrick King right after his Alberta court "victory" making the illuminati triangle with his hands. Suspicious in any case. Either they are planning for a big false flag or another possibility is that the "truthers" are supposed to "win" in a controlled demolition of the goverments of the planet who would be exposed for participating in the vax depopulation program. Then the Luciferian New Agers would roll in and fill the power vacuum.

If these "don't comply" people really are part of the conspiracy (the whole Paul family has always been full blown masonic) the angle could very well be that they don't intend to obey any law but will tabulate those who try to use law to escape this genocide for the first batch to the FEMA camps.

This guy pulled me in with his video. I still like what he said but I never like people with those full-body tattoos. A sign of poor discernment as well as too fad motivated, too self aware. His arms were not shown on the video.

Thanks for posting this. At least there is some sanity left. Just don’t comply with immoral “government” policies. They have no authority. No immoral order has authority over anyone. That’s why I love the natural law as it doesn’t leave any doubt if properly understood. Fauci seems to be a type of Nazi trying to impose the elitist bullshit on the whole population of the “United States.” The government is losing all credibility and rightfully so.
https://verydumbgovernment.blogspot.com/2016/08/how-about-no-government-part-2.html