Do Covid "Vaccines" Destroy the Spirit? 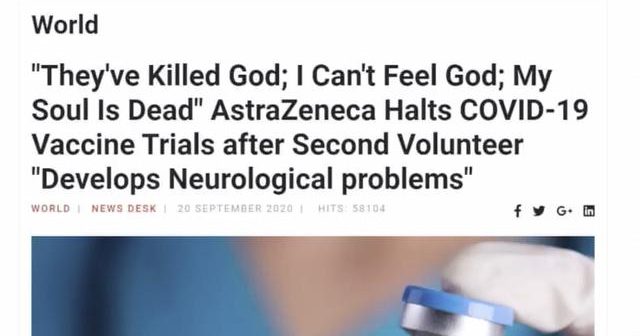 "I don't know how else to put this.
I had my second dose of Pfizer two weeks ago
and I've become convinced there is something
in these vaccines that cuts people off from spirit."

From Reddit Conspiracy
It's like my consciousness has been leashed and life has turned the volume down real low. I had an intense spiritual awakening about 2 years ago triggered by psychs and it's like all the connection I gained has been erased. I think this is some kind of evil alien tech I'm not even joking. Like Law of One Orion type shit, to stop us ascending whatever that means. I can't describe the change in my awareness, I struggle to believe it myself. Like my Mode of Operation has been changed. I'm lucky I'm even conscious of it, because I feel like most people aren't really in touch with spirit and wouldn't notice anything wrong. For me this is hell. And I know some of you know what I'm talking about when I say I feel like I've betrayed my soul's mission. It's like there is no forgiveness for me, I've failed and allowed myself to fail knowing something was wrong, I didn't have faith. Part of me thinks I did this on purpose because my connection was so painful. But nothing is worse than this, I'd rather be suffering.

I can no longer:

- Feel empathy, or deep emotion, heartfelt emotion. You know that thing in your chest where you feel, physically, not intellectually. It's gone. No love, happiness, sadness, anger, anything. No compassion.

- Transcend myself in meditation, feel infinity, God and the like. Like I've been reduced to my 5 senses, and even those have been diminished.

- Feel my intuition at all, no gut feelings whatsoever, it's like I'm completely blind.

- Feel music, art, food. Be passionate about anything, have motivation for anything, I don't even feel hungry or tired, I feel nothing. Not a numbness, not a dissociation (I've had both), but a straight up lack, a severance to that spark that animates our inner lives.

- Lucid dream, astral project, even feel my energetic body at all. It's like it has dissipated.

- Sleep properly at all, and when I do it's like I can't enter as deep a sleep as I used to.

- Breathe or yawn as deeply as I used to?? Which may seem unrelated but breath = prana = lifeforce...ygm

If anyone knows ANYTHING about this or how to reverse it. I've seen all the shit about funvax and whatever, if this is science it has to be reversible somehow. Hopefully if I don't take boosters and work on my connection I might be able to improve it. If anyone has been through the same or knows anyone who has, DM me. I had an extremely strong intuition (last one I've felt) telling me I would basically die if I took this dose, but my mother is my weak spot and I caved to her (doesn't help that I'm financially dependent on her etc.) but honestly I should've become homeless rather than do this. Now I'd rather become homeless than ever take a booster shot. There is no life without love and yet that is the life I'm now living. So yeah. If anyone had their doubts about the vax, here is my theory on what it does, based on personal experience

EDIT: apparently the heart contains 40,000 neurones, and I'm pretty sure the heart is the 'heart' of all of this so to speak. It's both the seat of emotion and the seat of spirit, linking soul and body, mind etc. - I'm thinking this vaccine has a way of shutting this process down. Does anyone know anything about heart neurones or how I can reverse the damage done to them/turn them back on?

Credit -- Jim Stone
Related - Vaccines causing sociopathic behavior?
They Killed the God Gene
Leaked Pentagon briefing on "Killing the God Gene"  https://youtu.be/spw5nmUrpWA
VMAT-2 Inhibitors Sever Soul Connection
From the Reddit Comments-
Interesting. A woman I went to school with who is very spiritually in tune, she's been posting daily selfies for an unrelated reason and the day she posted when she got the vax her eyes looked empty and totally devoid of the sparkle I've never not seen in her eyes. It was creepy and caught me off guard. So I totally believe this. I also believe it's why many of us are having a strong magnetic pull towards spirituality. 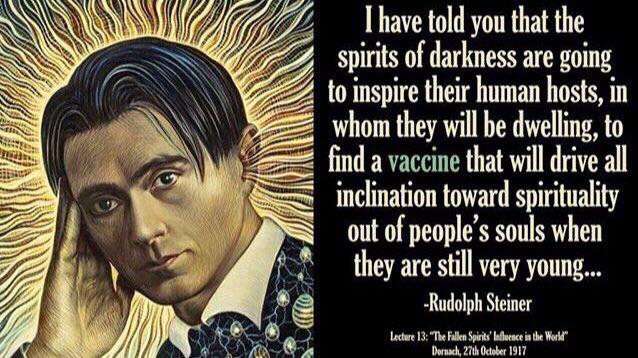 If you're spending lots of time plugged into the outrage cycles of the news and subs like this one, it wouldn't surprise me much at all.

That's not a criticism. It's just that the vibrational level of consciousness in these realms is angry, low, afraid, and deeply constraining.

Unplug, go spend time outside barefoot and in the sun. Breathe slowly, intentionally, and see how far that gets you.

My supervisor at my last job really was not himself and really started struggling after the vaccine. He was a prior pastor and we worked at a faith based shelter. He even stopped praying in sessions and I had to remind us to do it...and I wasn't even anywhere as devout as him . I remember seeing the change in him. One day he admitted to me in private since he knew I wasn't getting it, that since he got the vaccine he hadn't felt himself and he has felt so off and frazzled...in like a permanent state of brain fog and it really distressed him..

Then a close classmate of mine i was starting to date..when he got his first dose he went totally off the wall and stopped speaking to me, lost all of his kindness and empathy, relapsed, and was homeless within a matter of months completely out of the blue. The first shot is when he started to shift his behavior and be more disconnected, and after the 2nd he totally went off the grid. He might even be dead now, i have no idea. Both were moderna in the first vax wave in the winter-spring months. We were eligible in the initial distribution due to our jobs and location.

I remember neurological issues, psychotic issues, brain fog were a lasting symptom of covid in mild and asymptomatic people and I wondered if the vaccine was/would inducing the same effect..seeing the change in him and observing the change in people culturally in NYC which is extremely pro vax...its alarming.

I was not a conspiracy theorists about what was in the shots. I just didn't trust it because gardasil almost paralyzed me and it was so new and the virus wasn't understood...

Now that it's come out the virus itself was man-made in the weird China lab we funded, and the purpose was to "make vaccines"..and all this extremely aggressive pro vaccine agenda despite it not even be effective?? Plus the shifts I observed in a lot of people...now I'm starting to wonder, WHATS IN THE SHOT

Everything you described was depicted in the 2007 movie entitled The Invasion. You should watch it, maybe you can find some hidden clues on what you can do to restore your emotions and connection with spirituality. Good Luck ! 31

Comments for "Do Covid "Vaccines" Destroy the Spirit? "

We are told at Obadiah verse 18 that all the Edomite Jews are to be eliminated.

Well saints, because of a revelation last night, I'm certain we'll get to see that!
Note that Jacob and Joseph are the two most powerful tribes of the house of Israel and they have been chosen to do this elimination of the Edomite Jews that have persecuted Israel for centuries. However, at present, we have no clue who of our people are those of the two tribes. Upon the recall, the tribal identity will be known and the tribes will be gathered and associated by tribe as in the days of the times of the occupation of the promised land. At that time the tribes will be identified and we'll be able to see Jacob and Joseph do tier thing. I have no idea how the Edomites are to be gathered to allow the flame and fire to do the job, but if the Lord has spoken it. it will be done!

I am looking forward to having a "ring side seat" for that action!

As we already know, the Covid vaccines aren't vaccines at all. By the symptoms explained by the victims here in this article these RNA shots might be more like a psychotropic med than anything else.

If this be the case these shots will eventually ware off. This would explain the use for "booster shots" down the road and vaccine cards will many blank spaces for your future jabs.
Everyone I've talked to that has taken the jab have no plans on taking another one.

Try glutamine acid + glycine + acetyl cysteine. This mix detoxes your body from the graphene oxide (and other kinds of heavy metals) which they injected with the so called vaccine. Once the muck is out your connection should come back. The graphene self-assembles in your body to an artificial nervous system that blocks the trasmission of frequencies between the natural cells. But it's not irreversible. The body itself has the capacity to disintegrate it that is why they want us to take a jab every six month or even sooner. You can support your body by taking the above-mentioned detox mix. Chin up! It's not too late.