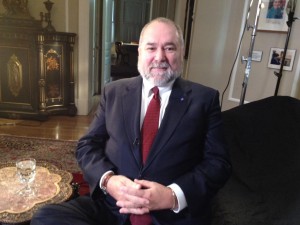 (RD Steele, 1952-2021)
Did Steele's Opposition to Vaccines get Him Killed?
By CR
(henrymakow.com)
Robert David Steele posted on his blog that he was in hospital had a "near death experience" due to his illness and tested positive for covid.  He says his condition was improving, which gives reason to believe that something else could have been done to him which led to his demise, but who knows.  This is his last post: Robert's Condition - 08/17/2021 - Public Intelligence Blog (phibetaiota.net)
His site says "Sadly Robert David Steele passed away on 28 August 2021 of COVID-19 pneumonia."  If there is a high likelihood that he was in fact killed then what's going on with the people who are now running his site?

From my perspective, it reminds me of what happened to one of my uncles.  He had cancer and was in hospital but was recovering.  The day he was supposed to go home he had a heart attack and died.  No foul play suspected.  Apparently it's not unusual for sick people to feel better shortly before dying.

As for theories why someone might want him killed:

Did RDS' "double game" get him killed? More likely...was he seen as a threat to Trump?
RDS can handle a crowd better and proved himself to be far more capable of playing Trump's game than Donald himself who has been deteriorating severely for years.  This is why attacks on Biden's capabilities are so important to the GOP as Trump has scrambled eggs where his reptilian brain used to be. RDS was looking into a stolen $300k.
Did this get him killed?  Who has the money?  Who would know how to murder someone and be certain COVID was blamed?
From there...we look at some of those around him, name brought up by Ben Fulford, younger people who appeared out of nowhere, likely created by a foreign intelligence agency.
If Israel didn't have Steele killed, and they had the most motive, then who did it?
Exclusive: The Strange Case of the Death of Robert David Steele - Veterans Today | Military Foreign Affairs Policy Journal for Clandestine Services
So either he is one of the unfortunate few that died of covid (or whatever virus triggered a positive test, could be flu) or it's an unsolved mystery.  At this point, if he really was killed it would be near impossible to verify and then find a suspect and motive.
Related Obituary and More Info