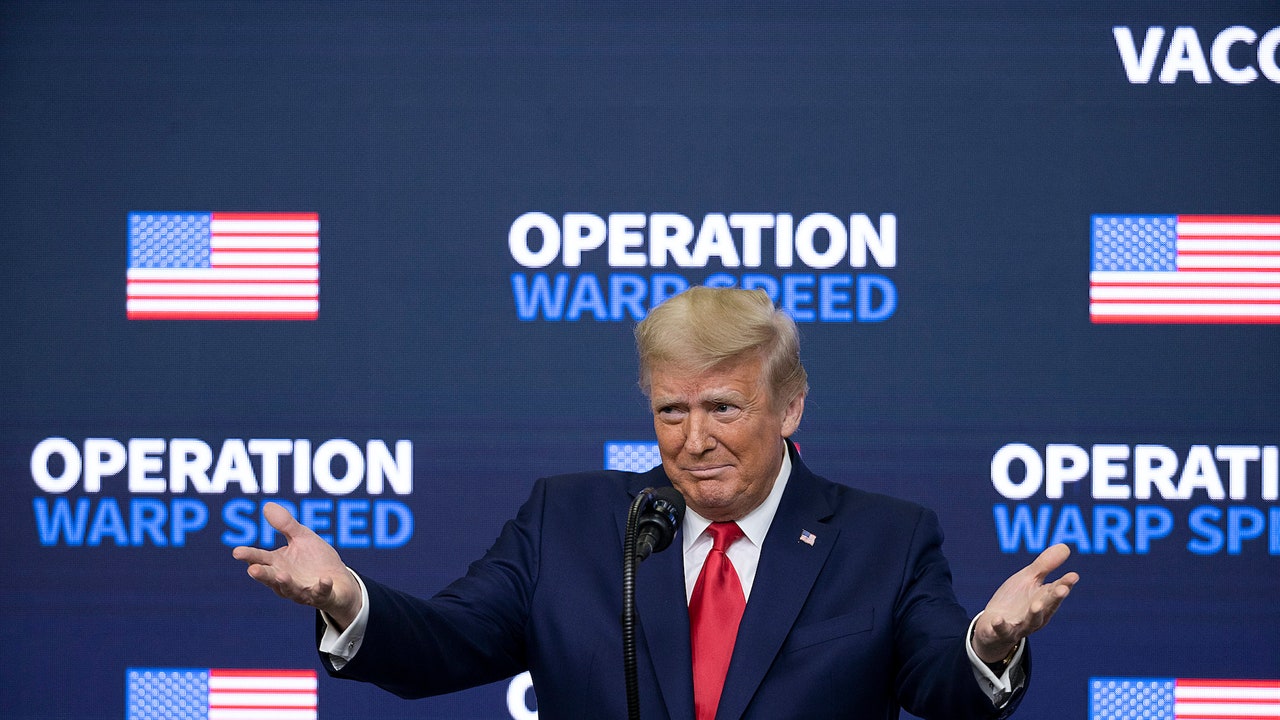 (Trump cancelled any credibility he had left by taking credit for the killer jab)
Steven Fishman asks- "Do you want to be remembered as the president who took credit for OPERATION WARP DEATH, which ultimately will lead to the wretched agony, demise, and death of over 200 million Americans?"
Makow comment - Fishman is one of many Americans who still haven't recognized that Trump is a crypto Jew, Freemason and traitor. The role of False Opposition is to sabotage resistance and get the stragglers on board. He betrayed his followers by throwing the election to Biden. Both men are agents of the satanist (Cabalist) Jewish Rothschild conspiracy.
Related - Trump blames lack of trust in Biden for vaccine hesitancy. "I can think of no other reason why people won't get the shot."
-----------  Trump says he is very proud of his role in fast tracking covid vaccine.
Steven Fishman is a former administrator of the Howard Hughes Trust
An Open Letter
To: President Donald Trump:
On "Hannity" last evening, October 7th, once again you bragged and took credit for fast-tracking three "vaccines" in Operation Warp Speed.  You took pride in that.
My question to you is this:  Are you living inside a plastic bubble at Mar-a-Lago and have no idea how horrifically the "vaccine" kills people, or are you part of the Global Genocide Conspiracy of Bill Gates, Klaus Schwab, George Soros, and Tony Fauci?
How can you not know how the "vaccine" is not a vaccine at all, because it does not produce antibodies to cure COVID, but instead is made of Messenger RNA containing spike proteins and prions comprised of graphene oxide that contains microscopic chards of metal that cut to pieces every blood cell in the human body over time, causing blood clotting, lung paralysis, mitochondrial cancer, and death? 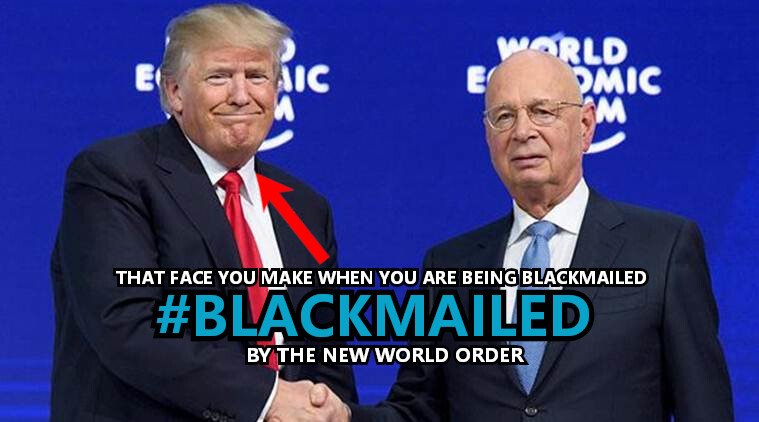 (No, it's the face you make when you have sold your soul to the devil and betrayed the trust of millions.)
Do you not know that graphene oxide steals oxygen from your heart, lungs, blood, and brain until there is no oxygen left to sustain life?  Have you looked at the VAERS statistics lately to see the 2.2 million adverse reactions, and 11,500 deaths caused by the so-called "vaccine", keeping in mind that only between 1% and 10% of Vaccine Adverse Events are ever reported to VAERS?
Have you never seen any videos or lectures by Dr. Sherri Tenpenny, Dr. Carrie Madej, Dr. Christiane Northrup, Dr. Lee Merritt, Dr. Jane Ruby, Dr. Simone Gold, Dr. David Martin, Dr. Joseph Mercola, Dr. Peter McCullough, or your very own doctor, Dr. Vladimir Zelenko, warning everyone that the "vaccine" is nothing more than a Eugenics Depopulation Lethal Injection Bioweapon?  Have you ever taken the time to listen to even one podcast by Brighteon Health Ranger Mike Adams?
On the other hand, many of us have seen the video of you together with Satanist Klaus Schwab at the 2018 World Economic Forum in Davos, celebrating and ushering in the "Great Reset."  What was that all about, Mr. President?
Cutting to the chase since I know you are very busy: Do you want to be remembered as the greatest president in United States history who protected our Republic from Socialists and Marxists; who defended our borders; who made us energy independent; who knew how to end the war in Afghanistan without leaving $86 billion in equipment behind and without ever leaving Americans and Afghan allies behind like the Crash Test Dummy in the White House right now did?
How you never allowed insane regimes like North Korea or Iran to develop nuclear weapons? or --- 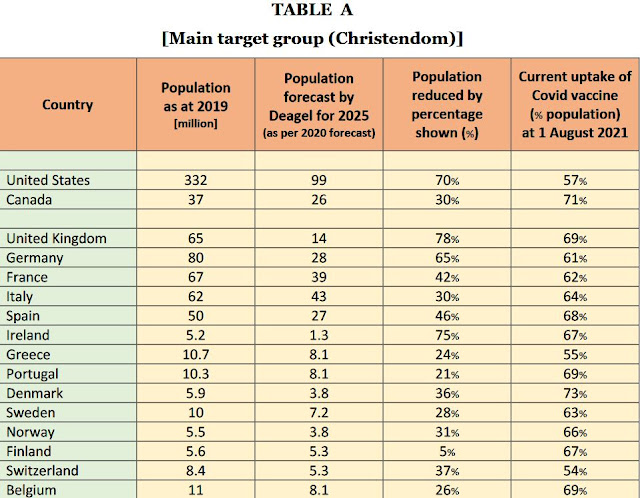 (Deep State think tank Deagel.com)
Do you want to be remembered as the president who took credit for OPERATION WARP DEATH, which ultimately will lead to the wretched agony, demise, and death of over 200 million Americans?
Proverbs 16:18 says that "Pride comes before a fall."
All you have to do is admit that you listened to so-called "experts" like Criminally Insane Tony Fauci, and that you did not realize until it was too late that they had and still have the most evil and demonic intentions.
All you have to do is put your pride aside and tell the American people that you made a horrible mistake about the so-called "vaccine."  There are many Republicans who took the Lethal Injection after you endorsed it and are seriously injured or dead.  It was not just Democrats and Independents who took the kill shot.  You truly need to atone to them.  If you speak out now, the America I know will love you for it.
Maybe you did not receive the 138 emails that I sent to you at pressoffice@donaldtrump.com, but one year ago in October of 2020, I begged you not to push the "vaccines" as part of your campaign.  Your former Pastor, David Sorensen, said the same thing, just as I did, that if you push the Lethal Injection, you would never be elected, because God would never condone it.
Now you are looking at 2024.  Okay.  However, I don't think you've even considered how many Americans will be dead by then from the death jab, or even by the midterm elections next year.
I am just one person - a nobody.  But a good 20,000 of your base of patriotic Americans are questioning why you ever promoted OPERATION WARP DEATH without researching the harm it will do.  I hear people wondering about that wherever I go.
I will gladly do is write a speech for you letting the American people how sorry you are and how much regret you have for encouraging them to be "vaccinated" with Pfizer Poison or Moderna Murder. 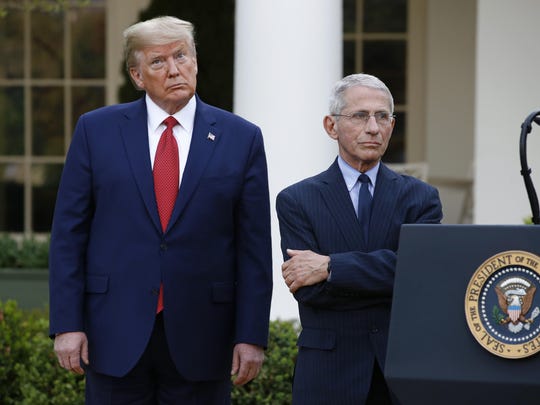 And that you should have done it already but your pride got in the way, but that you can no longer keep silent about your guilt over it.  And how you listened to Fauci and thought that he and the CDC had the best interests of the American people at heart when you stood next to him in the Rose Garden, but then admitting: "Boy, was I wrong!"
Do this, and you will come out on top, admitting your mistake, and even now at this late stage, saving a lot of lives of the "undecided" who are still considering taking the Lethal Injection.  You are the best president we ever had, but you are only human.  Tell America that.  Even Sean Hannity took the shot because he believed in you.  You were not a medical doctor.  You relied on Luciferian Fauci to your detriment as well as the detriment of the American people.  Eventually Demon Fauci, Bill Gates, George Soros, and Klaus Schwab will be tried in a Nuremberg-style court and hopefully guillotined or shot in front of a firing squad.
It isn't even about your future run for the presidency.  It is about your legacy.  How do YOU want to be remembered 100 years from now?  Your destiny is ultimately up to you.
Respectfully,
Steven Fishman                      Dated: October 8, 2021

If the people of US would have spoken French, then they would have said ? Nous avons été Trompées ....
Sorry, but I love a bit of sarcasm sometime ...

As Steven says--how could he be oblivious to all the true patriotic and caring doctors , especially after more than 10,000 doctors and medical scientists worldwide recently signed the "Rome Declaration"..his sales talents served him quite well..unfortunately it was not to our benefit but his globalist, cabal friends. There are no valid excuses he can offer, his words are empty.

I'd be grateful if you would let commenter Al Thompson know that at least one person (that's me) agrees with him 100 per cent, esp. his advice to stay out of the hospital if you can. And I like your input, too. Everyone would benefit from reading the book about group psychology by Gustave le Bon, The Crowd: A Study of the Popular Mind.

I have a lot of friends and acquaintances who are what I call “Trumptards.” The vaccines and their mandates are beyond any evil that I’ve seen in my lifetime. The whole vaccine fiasco falls directly on Trump and it had done more damage than any world war could have done. The government idiots are in love with Satan and they will stop at nothing to get their way.

My friend who is still in the hospital who supposedly got Covid then acquired pneumonia, then he got a bowel problem and has a colostomy bag. He went into the hospital for a heart problem.

The last place I would go for any medical treatment is a hospital or an MD unless I broke something and the issue is obvious. Even then, I would get whatever care was necessary and then get the hell out of there ASAP. It’s my belief that the whole medical system is as a Satanic cult. I’m seeing a lot of heartbreak from people and it is awful. I don’t feel like I’m living in the same world.

The best way to avoid being duped is to stay away from groups for now. Make sure all decisions are based on truth and the facts. You’ll always get a better result. The whole government system is based on Satanic principles and we are now seeing how completely evil it is and there probably hasn’t been anytime in history were it got better.

The best course of action is to check the morality of the things we observe and stick with the truth. Trump, in his display in advocating the vaccines shows what he is all about and I don’t think he’s going to repent anytime soon. His pride will destroy him and his handlers know it.

Steve Fisherman’s article is great. It is sad to see so many gullible Americans.

Dozens of women have accused Trump of sexual misconduct. I've even listened to interviews saying Trump was associated with Epstein. Other alleged victims have accused Trump of rape. Epstein's Orgy Island apparently had more pinhole cameras than the Pentagon. My guess is that Epstein was working for the Mossad, and that they got Trump engaging in an illegal sexual act with an underage victim. IMO, he is sexually compromised and this is why he is going along with big pharma and the kill shot. The Tower of Babel was held together with slime (Gen. 11:3). The NWO seems to be held together with sexual immorality.