The Vaccine is the Passport 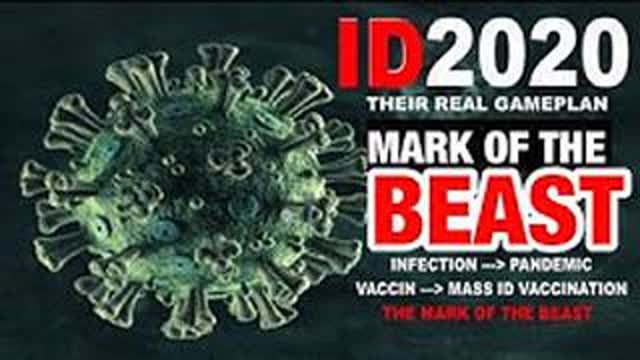 Using the pretext of injection status, the Luciferian elite will have the power to control the world's economy and everyone who wants to be a part of the Great Reset. When the old money systems crashes, the vaccine passport becomes the focal point for all economic transactions. The passport is IN the vaccine.
Injection Fraud: "They Want A Backdoor Into Our Mind"
No wonder the vaccines don't work. They are computer chips.
"In case you weren't aware IBM is in charge of creating and implementing the vaccine passports for the entire world. The vast swaths of digital information gleamed from these vaccine passports would indicate who is and isn't compliant via a social credit score."
By Lee Austin
(Abridged by henrymakow.com)

Former Bill Clinton adviser and author Naomi Wolf stated during a recent interview with Fox News: "'Vaccine passport' sounds like a fine thing if you don't understand what those platforms can do.
"It is not about the vaccine. It's not about the virus. It's about your data. It can be merged with your PayPal account, with your digital currency," she warns. "Your network can be sucked up. It geo-locates you everywhere you go. Your credit history can be included. It is absolutely so much more than a vaccine pass ... it has the power to turn off your life."
Just like being jab with the mRNA operating system, once you opt in there's no way out. You're only option is to be an outcast from the economic system.  Consider Modera admits on their own website the functionality of its' "vaccine" is more akin to an operating system. 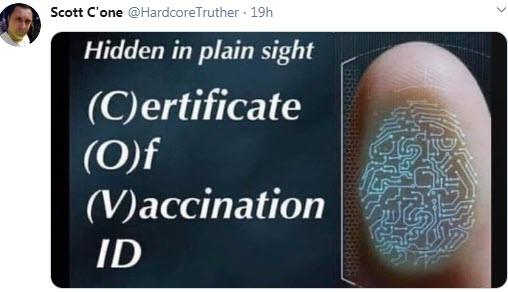 (Reader adds. But Henry, its COVID19. What about the 19? That's where numerology comes in. 1= the first letter of the alphabet 'A'. 9 = the ninth, 'I'. Therefore, COVID19 stands for C ertificate O f V accinationI.D.1. ARTIFICIAL 9. INTELLIGENCE. It's all about A.I. and 'the new race of men who will appear on this planet and death becomes the last enemy conquered'.)
"Recognizing the broad potential of mRNA science, we set out to create an mRNA technology platform that functions very much like an operating system on a computer. It is designed so that it can plug and play interchangeably with different programs. In our case, the "program" or "app" is our mRNA drug - the unique mRNA sequence that codes for a protein." ...
The transition from a smart phone vaccine passport, to a vaccine smart patch passport is already in the works. The vaccine smart patch passport could be shipped to your home. Just put it on your hand, take off the sticker, and you've been vaccinated. The band-aid contains tiny needles, purposely designed as snake viper fangs. And yes, I'm sure this wasn't a coincidence either.

During an interview Catherine Austin Fitts, publisher of the Solari Report, summed up the goal of the vaccine agenda.
"They want to download a Microsoft Office System into your body, into your brain and hook it up to the Jedi Cloud Contract and the Amazon Cloud Contract at the CIA. And if they can get seven billion people hooked up directly to their cloud contracts and use the virus...I mean it's very clever. Use viruses to keep those updates coming. It's the same exact models you use in the computers. Just like Bill Gates made it possible for the intelligence agencies to get a back door into our data and our computers. They want a back door into our mind. They are trying to load an operating system into our bodies. I call it the injection fraud."
Lee Austin is the author of "Morning Star's Tale"