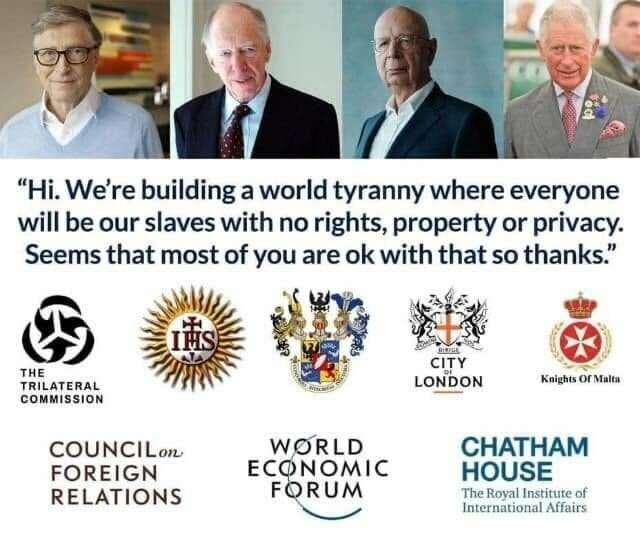 Comments for "Makow -- Covid Unites Humanity Against Its Common Enemy"

But I would remind everyone that we likely will not have that instantaneous communication all the way through this. Take heart, however; in all the hundreds and possibly thousands of years "they" have been trying to gain control they have never yet succeeded.

The thing to remember is that this is not a group or team competition, this is, when all is said and done, an individual competition.

We do try to help each other see, particularly those we love, but whether they do or not is up to them. In the end we are like an airplane pilot gesturing and pointing in warning to another airplane pilot, for all the effect we will have.

The common enemy can be readily identified; they have taken a blood oath that supersedes any other oath to constitution, government or nation. They signal each other using signs and symbols that are easy to see, if you pay attention.

It's only a matter of time before natural law replaces human law, which was abandoned.

You are right, "It can bring us together" but it will not happen. Your argument is wishful thinking.

Covid will not bring humanity closer. Humanity has only enjoyed togetherness very briefly, maybe during World Cup and other sports events. The less-than-1% evil conspirators have comprehensively divided the balance of humanity into various boxes.

We will continue to be divided until Prophet Jesus, peace be upon him, returns. There is no way mere mortals can unseat the evil conspirators. Corruption has permeated all aspects of life globally. Only Jesus can bring divine judgment and establish justice in the world.

Your expose of "The enemy" will save some people (because they can now differentiate good from evil) but it does nothing to unseat their position of power. The evil conspirators are not afraid of small truths; not even if all the small truths are put together in one picture and shown to all people.

Humanity has been brainwashed well and they know it. They are 10 steps ahead of any truth movements. They are ever ready to misdirect the truth movement into a controlled opposition camp.

I believe you do understand my points. Tq for reading. May God protect you always, so that people will keep getting the small truths.