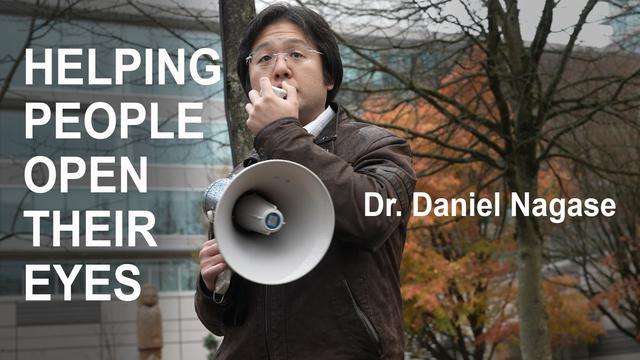 Last Sept. Dr. Daniel Nagase was fired from relief duties at a hospital in Rimbey Alta after giving Ivermectin to three patients. All three recovered completely.
"There is something malicious going on," he says. "I hope you can all see the bigger picture."
Here is the speech he gave Friday in Victoria BC marking the 75th anniversary of the Nuremberg Doctor Trials.
Dr. Daniel Nagase has been a doctor for over 15 years, he graduated from Dalhousie Medical School in 2004.
He has been an emergency doctor for 10 years and has been working in rural underserviced communities throughout Alberta since 2015.
Makow - Let's call a spade a spade. The government, medical profession and pharmaceutical industry are guilty of mass murder, and the MSM and big tech are complicit.
by Daniel Nagase
(henrymakow.com)
I am here today because I dared to treat 3 Covid patients with Ivermectin, a safe and effective drug.

The good news is that all 3 elderly patients who received Ivermectin recovered from Covid and were discharged from hospital.

The bad news is that after curing those 3 patients, I was banned from working in all of Alberta's hospitals.

What I thought was just a hospital problem turned out to be far bigger, as I was about to discover.

There is a regulatory problem, where both the colleges in BC and Alberta, the colleges that dictate who may practice medicine, banned the use of Ivermectin to treat Covid.

But not only did they ban a safe drug.  The college of physicians and surgeons pushed a dangerous and ineffective injection as the only path forward for an unremarkable seasonal virus,

One with a greater than 99% survival rate.

However, the problem is even greater than the medical licensing boards pushing the most dangerous injection in the history of vaccination.
Politicians pushed lockdowns, a term for prisoners.  Remember two weeks to flatten the curve?  Then it became two months, and now almost 2 years later, freedom from imprisonment, a lockdown, only at the price of submitting to an inhuman experiment.

A genetic tool that killed all the animals it was tested on when trialed with SARS Coronavirus 1. It would be unethical to repeat this scientific abomination on animals. But now taking the deadly RNA manipulation is the price of being freed from a "Lockdown".

Or so they say.

For those who did not believe the great lie that a vaccine could end a pandemic, for those who refused the unreasonable idea that locking down the healthy could better society... there came coercion.

Take the injection or Lose your job, your house, your family.

This is a problem that infects judiciaries and health authorities alike.

Bureaucrats who use the excuse of public good to steal money, steal people's futures, and steal the very freedoms that are the foundations of something called Humanity.

So what is freedom really? What does it mean to be a man or woman?

Imagine for a minute there was no such thing as humanity.

Beings that only did what they were told. Beings that had no choice, no freedom.

What would the ruler of mindless robots be? Would there be any need for reason?  Truth? Enlightenment?

Would the ruler of robots, A master of mindless slaves. Be in fact, a mere tyrant.

Is that the nature of those who would try to rule over us with coercion and lies?

A government founded upon lies, funded by stolen labour and savings, enforcing injustice with cowardly obedience.

But ---What if the ruler of all, the creator of all creation, the divinity that placed a light of justice in each and every one of our souls was someone who ruled with reason?

With truth. What kind of men and women would result?

Let us answer this question, by looking into the mirror.

Do we have choice?  Do we have the freedom to choose?  Is there something that exists in every woman and man that makes us human?

Yes there is something.

The ability to choose between evil and good, between slavery and freedom.

That very ability to choose was given to each and every one of us because, the creator of all creation rules with reason, love and enlightenemnt.

The gift given to humanity, the gift that creates humanity out of mindless golem is choice.

That is the nature of the universe.

Only an enlightened creator would give choice.  Only one who rules with truth, love and reason would entrust his creations with the same power that led to creation.  The freedom to create.

How do we know this to be true?  Because even in the darkest of tyrannies women and men can still choose.

To swell the ranks of tyranny with fear Or to win freedom with courage is a choice.

Time and again people have chosen fear.  Charlatans seek to buy our souls with money.  And how cheap is that soul bought for 1 million, ten million or a hundred million.  How pitiful are those who sold something priceless and eternal for a handful of dust?

Tyrants today seek to enslave our souls with senseless acts of violence, look at Australia and Germany.  How sad is that heart which is turned away from freedom by fears and falsehood.

There are those who try to separate us from the light that was born into each and every one of us.

They only know power, and their only goal is to be a master of slaves.  They know not truth, reason or enlightenment.

They do not follow the footsteps of that which created them.

They do not know that freedom exists in each and every one of us.

But the choice is ours.

Just as it was the choice of all of creation to give us freedom,

We too must choose to use our eyes to see truth, our minds to think with reason, and our hearts to create love and beauty.

That creativity, the freedom to create, is given to each and every one of us with the hope that the light of reason would guide us to act just as we were acted upon, as men and women born with freedom.

One world is that of mindlessness, lies and slavery.  The other is the image of truth, justice and freedom.

The choice is ours.
-------
Related-
Here are links to a couple of interviews with Nagase done by a Canadian doc, Sam Dube.

Thanks L!
First Comment from DM-
Doctor N is right in his speech about freedom and slavery. From my own experience most people choose to be obedient instead of fighting for their freedoms. The people I see here in my current city of Vegas have a look of defeat on their faces. They think if they just go along this scamdemic will be over when it never will.

I am one of the few people who refuse to be obedient to what my government tells me. When I try to tell the zombies  the truth about Covid-19 they have the deer in the headlights look on them. I listen to what my gut aka God tells me. This was never about a so called virus. It was a plan by governments around the world to take away our freedoms and liberties. I choose to stand up for my convictions and beliefs. I am one those who are awake. I have been called a conspiracy theory nut job. I don't care. I know what the truth is. I will continue to fight not just for me, but for others too.