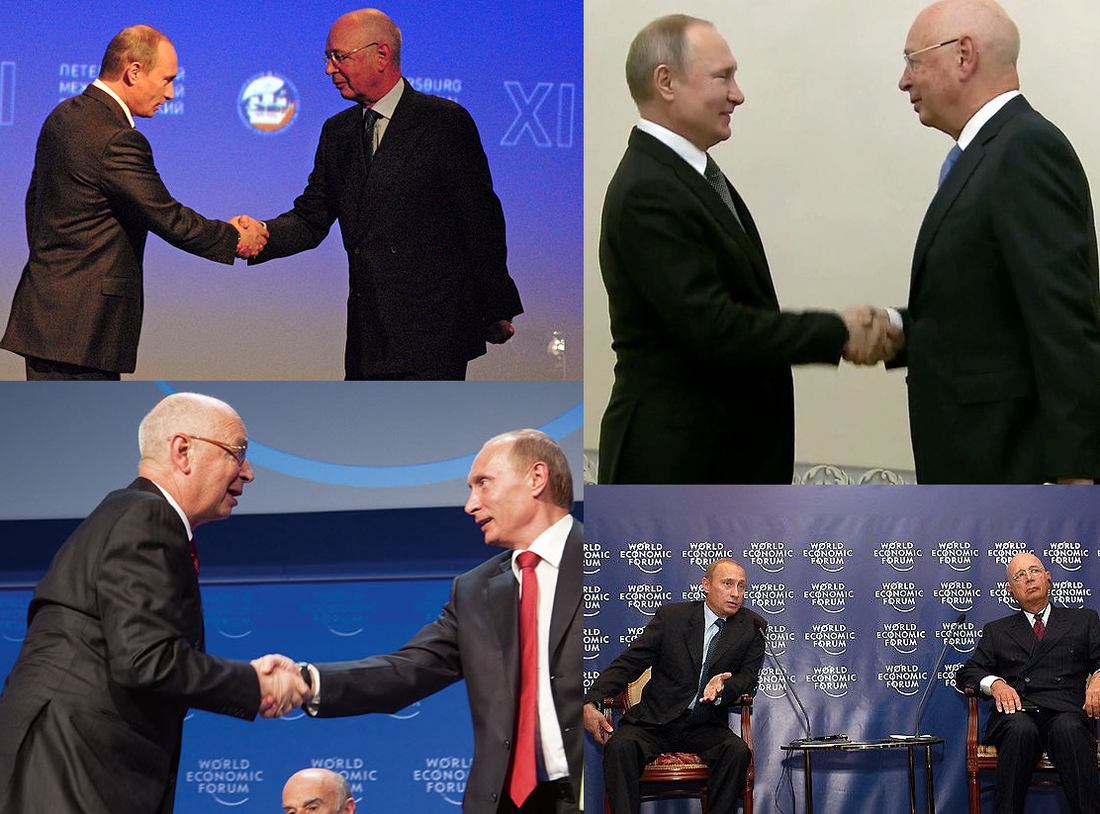 Yet it's the one "vaccine" that isn't being linked to it

Putin is a Rothschild bum boy like all world mis-leaders.

by Riley Waggaman
(abridged by henrymakow.com)

In January of this year, Putin gave a keynote (virtual) address before the World Economic Forum. The theme of the January 2021 forum: "The Great Reset."

Beginning his speech with a warm "dear Klaus," Putin recalled how he first met Mr. Schwab in 1992 and since then had regularly attended events organized by the Fourth Industrial Revolution visionary.

Putin used his address to urge for "expanding the scale of [COVID] testing and vaccinations" across the globe--policies that have ushered in worldwide medical apartheid.

Echoing the sentiments of western leaders, Putin also argued that the global economy would need to be rebuilt from the ground up by central banks:

[T]he key question today is how to build a program of actions in order to not only quickly restore the global and national economies affected by the pandemic, but to ensure that this recovery is sustainable in the long run, relies on a high-quality structure and helps overcome the burden of social imbalances. Clearly, with the above restrictions and macroeconomic policy in mind, economic growth will largely rely on fiscal incentives with state budgets and central banks playing the key role.

The Russian president has repeatedly stated vaccination should be voluntary--but his personal opinion has had no impact on actual policy. All 85 regions of Russia now have decrees requiring certain segments of the population to get the shot.

On December 17, Putin voiced support for a nationwide QR code law--one of the most unpopular pieces of legislation in recent Russian history. The introduction of digital health IDs would in essence make vaccination compulsory for those who want to partake in life's most ordinary activities.

In late November, after the health ministry approved "Sputnik-M"--Russia's COVID shot for ages 12-17--Putin suggested authorities begin "thinking about" vaccinating children starting from the age of two. How many two-year-olds have died from COVID in Russia? (Trick question: the Russian government doesn't disclose COVID-linked deaths by age group. In fact, the Russian government refuses to publish lots of highly important COVID-related data, including statistics on post-vaccination side effects. Why?)

TIME FOR A RETHINK?

In October, RT.com ran a provocative op-ed describing the Great Reset as a "cartoonish fantasy that will hand the global elite even more power."

The irony, of course, is that Sputnik V is practically the official vaccine of the WEF--and the Russian government is among Schwab's biggest fans.

Which is why I think all this Ukraine war bs is just a diversion. Even if war broke out and was contained to Ukraine the casualties would be far less than the worldwide body bags stacking up from the kill shots. In the US over 20,000 in VAERS and 46,000 elderly easy kill victims for a total of 66,000 which is more than US dead in Vietnam for the entire war. And this number is said to be only 1-3% of the total.

I was always very suspicious why Russia would participate in the Covid scam. Did they go along reluctantly just to avoid more "eyes" or evil doing to Russia. Or, they participate eagerly and enthusiastically? Its clear now, its the latter. Russia and the West are not opponents, that is just theatre. I always found it so odd why Russia was so soft in their response over the last decade when they were provocated by the West. The BS in Ukraine is just theatre a diversion (not meaning there are no casualties).

Klaus Schwab mentioned that Putin is one of his Young Global Leaders. This is not confirmed from other places.
https://www.bitchute.com/video/7LQEL3GWI1P1/

If you read the prospectus for the CBR, the Central Bank of Russia, it becomes clear they are under Rothschild credit control and the bank is "proprietary" just like everywhere in the NWO. Differences in roles played by global misleaders are only intended to maintain an illusion of sovereignty for people whose liberties are long gone. The Chabad rabbi handling Putin openly states he owes his support to the Rothschilds. Russia pretends to defend Syria while allowing their best friend in Israhell to bomb away. Ever since the American Bolsheviks overthrew Russia, the Asian bear has been used as an ally and enemy whenever it suited the official narrative. Putain like all the rest does false flags and he does not allow freedom of speech. But it's not him per se, it is the NWO running Russia. They keep the Russians too drunk to think; and those who might think, cannot say.