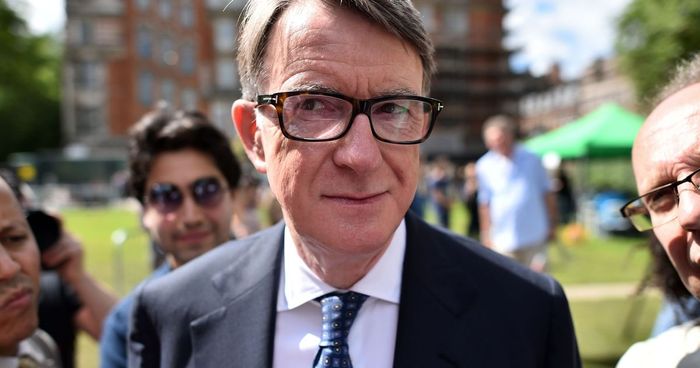 THIS TRIBUTE MIGHT BE EMBARRASSING! MANY ARE STILL ALIVE!!!!

"The Dark Lord, Peter Mandelson, left, apart from being openly gay, is one of the highest initiates in the United Kingdom. He was trained in the hebdomadry system of Magick, the same system used by both the Alpha Lodge and the Order of Nine Angles. His close association with international business figures and the Bilderberg group have been of great, indeed inestimable use to the left-hand path.
"Following well thought out and well-honed traditions, his dream is a prison-grid global community. He loves to control. And 'Mandy' as he's known to those who know him best, is as sharp and dangerous as a stiletto.
"It is Mandelson who has helped turn Europeans into serfs for Europe's banks. Europe is now reverting to a neo-feudalism structure with bankers as the overlords of their indentured citizenry. Britain, America and the rest of the world will go the same way. Kleptocratic politicians are merely vassals."
Insider, Aloysius Fozdyke revealed world satanic control in 2004.
by Aloysius Fozdyke
(henrymakow.com)
Satan is the only God who cares! He's always wanted what's best for humanity, but nonetheless gives sheeple what they really want. Satan has never demanded worship -not even of the two thousands years' dead, Jewish, homosexual bastard! Satan demands study, application, but most of all - Action!

You know what's coming. I've told you before. And because no one did anything, it stands to reason that what's coming is what you want. Economics, it's more important than politics. In America, the food shortages will be like nothing ever seen before.
How do you reckon superannuation/pension funds are going, given the economic destruction of the lockdowns? When interest rates rise, any ideas on the consequences to economies sustained on inflation? Same everywhere that matters.
Cancer rates - especially in those who have had cancer - will rise. Cancer rates already are, but this is just the beginning. Muzzles ensure high blood carbon dioxide which cancer cells need to produce alcohol and therefore multiple. Little children forced to breath in their own body waste. It's great! They were only going to grow up to be like their parents anyway.

There will be no effective uprising and nothing and no one can stop us.
You've paid for the brutal criminality, needless suffering, myriad repressions and death being unleashed, so give yourselves credit. The vaccinated are the walking dead. Rest easy, as I do, in the knowledge that more is coming.
The NWO is Chinese, so unless you're Chinese, you and yours missed out. You know that the Chinese don't use modifying rna vaccines, but old-fashioned protein-based ones, don't you?
MY MASTERS
I know my work will continue after my death, but before I go to walk with Satan, in His world and with His Bride, Baphomet; these individuals deserve more than I can give them.
First and foremost, my Teacher and Magus, the late and devoted Petor Narsagonan who was known by many names. About forty years ago he obtained The Epistle of Matthias in the Philippines. That was when the Order of Nine Angles started going public.

Dr. Stephen Thomas Ward (left): Living God and Master Magician. No one will ever know the full truth, but the coming Chinese Empire owes much to him. He influenced the Satanic Alpha Lodge. Petor and I carried on his Work, now coming to fruition - with (amongst many others) John Winston Howard, 33 degree and the late Barry S. J. O'Keefe AM, QC; deeply Catholic, but we'll exploit anyone and anything.  (See Stephen Ward was a KGB Agent.)

Matthew Lawrence: Despite recent obstacles, his work will continue.

The monarchists of Australia, New Zealand and Canada together with their republican counterparts, UGLE Freemasonry, plus the Returned Services League of Australia. They will never know and just as well.

H.W. and G.T. Armstrong for showing the way and the Hillsong Church.

Baron Charlie Falconer of Thoroton. He showed us how to prove the vice-regal appointment documents for Australia, New Zealand and Canada were forged by Jack William Straw and we gave his information to the Chinese government.
CONCLUSION
As I've stated, a huge economic crash is very, very close. After that, a theocratic, stratified, feudal world brutally enforced by technology. The Usher of Desecration walks amongst us and Vindex is coming. I've long recommended silver as silver is Satan's metal.
Finally, I want to thank you, the compliant filth for doing the right thing.
Remember, 'the lord is my shepherd...' and like all good shepherds, eventually he leads you to your slaughter - because that's what shepherds do.
Your deities are asleep, whilst ours are manifesting and still, you don't see. Satan loves you! And so do we.
A.J.F.
--------
Related- Makow- Satanism Explained     Evil is organized and has unlimited funds. All we've got is belief in what is good, true, wholesome and healthy; and the stamina to uphold this belief.

My wife works in a hospital in France
in was common knowledge that Peter mandelson ( a pervert jew)
was admitted with severe internal pain
on examination it turned out he had been playing the homosexual game of “felching”
Felching is where a cardboard tube in placed in the anus and a small furry animal slid down inside it
the idea is that the furry body will excite and tickle the insides
but in peters case as often happens the animal becomes scared and scratches which then become septic.
felching is a vile game homosexuals play when often aftera few drinks
Peter later denied it and said it was a grumbling appensix
BOLLOX the man is a dirty jew pervert

Whatever is going to happen, these mad plans are not going to work, seeing that they are against the (divine) order of Nature. They may ruin a lot on their way, but their "satanist utopia" would never be stable. Live and learn, I guess.

In any case, we can hold to God and His principles. No matter what else happens, investing our time and energy there is going to pay off, either in the here, the hereafter, or both.