YouTube Address
Gonzalo Lira, a Chilean blogger who lives in Kharkov, Ukraine, says that despite Masonic-Jewish-media reports,
the Zelinsky junta has lost the war.  Zelelinky pins his hopes on drawing NATO into the war by mounting a false flag chemical attack on civilians.
Your Destination Now

Let me put this into perspective-it took the "mighty" U.S. military machine 3 weeks to capture Baghdad while having air supremacy and facing a demoralized, ragtag Iraqi Army. Boy, we pushed out our chests over beating up those little kids.

Consider what Russia has done. They have seized territory greater than the size of the United Kingdom. The Russians did that in less than three weeks. They have now surrounded Kharkiv and Kiev. They have cut off what remains of the Ukrainian Army in the eastern half of the country and are destroying them. The Ukrainian Army no longer has the capacity to function as a modern Army. Those Ukrainians who chose to continue fighting will do so as insurgents or guerrillas.

Russia has decimated the Ukrainian Air Force and its ground-based radars and its combat airfields. Russia is now in de facto control of Mariupol (a key Black Sea port) and is moving on Odessa. 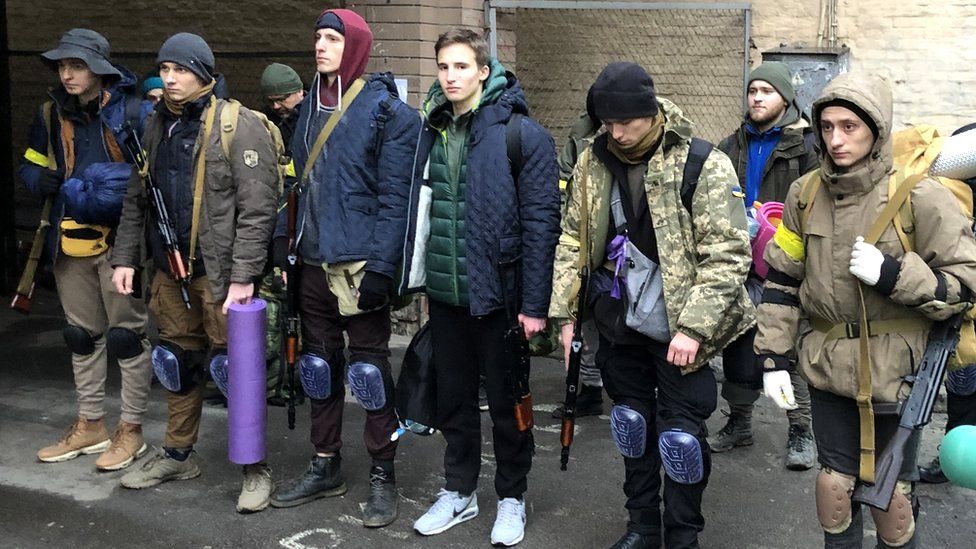 (Zelinski is sending naive students to their death after one week of training.)
Russia also destroyed a key Ukrainian military base in Western Ukraine near the border of Poland-Yavoriv.

Russian missiles pounded a military base in western Ukraine on Sunday, killing 35 people in an attack on a facility that served as a crucial hub for cooperation between Ukraine and the NATO countries supporting its defense. The barrage marked an escalation of Moscow's offensive and moved the fighting perilously close to the Polish border.

The attack so near a NATO member-country raised the possibility that the alliance could be drawn into the fight, and was heavy with symbolism in a conflict that has revived old Cold War rivalries and threatened to rewrite the current global security order.

The story that is not being told is that several CIA contractors and UK special forces military advisors were killed and wounded in this strike. I believe the death toll is far higher. This was not your typical strike on a mundane base. This facility was the heart of receiving Western weapons and training Ukraines and mercenaries to use them.

Russia is behaving as a large Boa constrictor methodically squeezing the life out of the Ukrainian government's ability to fight Russia. Without air power and functioning artillery and cruise missiles, Ukraine is now the equivalent of a boxer with both eyes closed and a savagely broken nose. The fight is not going Ukraine's way.
Michael Snyder on the real situation in Ukraine
Most Americans don't realize this, but the Russians are actually offering to end the conflict if six major conditions are met...
No NATO membership and a neutral position.
Russian should be the second official language of Ukraine, with laws prohibiting it abolished.
Recognise Crimea as Russian territory.
Recognise the independence of Donetsk and Lugansk.
Demilitarisation of Ukraine and abandonment of weapons that could be a threat to the Kremlin.
Banning of ultra-nationalist parties and organizations in Ukraine.

But you won't hear much about this on the major cable news channels, will you?

And that is because it doesn't fit with the narrative that they are currently pushing.

I definitely understand the desire of many people to root for the underdog, but the reality of the matter is that the Ukrainian armed forces are greatly outmatched.

On the eastern front, the Russians just flattened the town of Avdeevka and essentially wiped out the Ukrainian 95th Airmobile Brigade...

The big news of the day is that the Russian forces finally decided to, shall we say, change pace, and by all account the intensity of the artillery, aerial bombing and missile barrage which hit the Ukie forces in the town of Avdeevka was absolutely unprecedented and following this barrage the LDNR forces broke through 8 kilometers of just about the most heavily defended sectors in the entire theater or operations. The Ukrainian 95th Airmobile Brigade (one of the most combat capable unit of the Ukrainian Army!) was defending this sector. According to reports, this entire brigade was basically wiped out.

The truth is that what the Russians just did to Avdeevka could be done to every single major city in all of Ukraine.  (Continues)