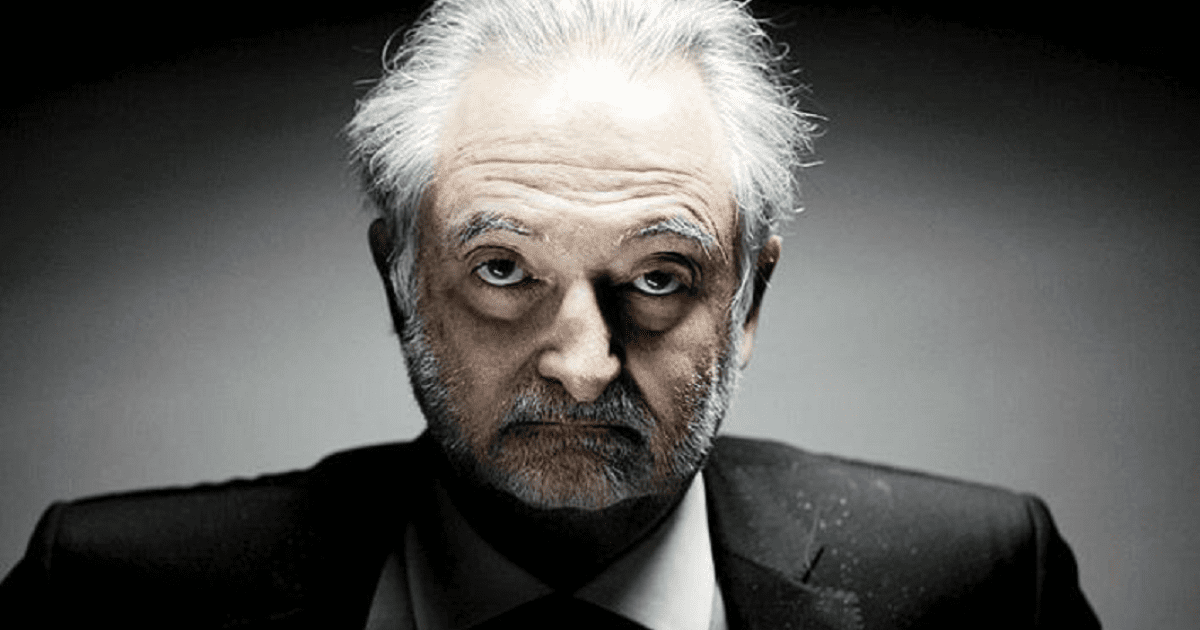 He predicted a future of borderless nations, stating, "Above all, what remains especially important is to invent a republic without territory, without walls. Diasporic."  No nation states allowed in the Jew World Order.
Attali then pivots to "Income," which he predicts "Universal Income" and working from home via "telecommuting":

Every person will perhaps one day have the right to a decent income paid by the state independent of any activity: The Universal Income....More than half of all workers will no longer be employed...Working from home via telecommuting (home office) will account for half of all jobs.
In 1981, he wrote-  "Euthanasia will have to be an essential instrument of our future societies, in all cases. We cannot of course execute people or set up camps. We will get rid of them by making them believe it is for their own good.

"We will have taken care to have planned the treatment, a treatment that will be the solution. The selection of idiots will thus be done on its own: they will go to the slaughterhouse on their  own."
More "prophesies" here.
---------- 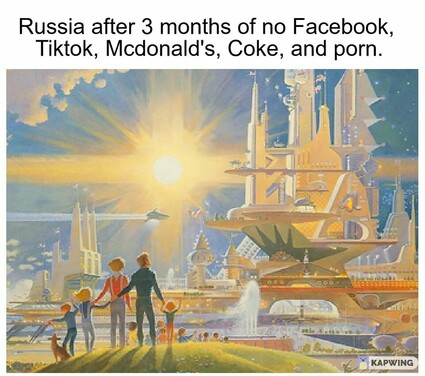 The Saker say Russia is winning the war but losing the PR battle. He says Ukraine was planning to attack the Donbass.
https://thesaker.is/the-russian-military-intervention-in-the-ukraine-a-macro-view/
------
Ukrainian soldier credits England with providing the anti-tank weapons used to destroy Russian column. This does put the UK at war with Russia.

---
Russia Tells the US "We Have Found Your Biological Weapons" (VIDEO)

--------------
The biolaboratories were closed in a hurry, the department explained, because of the Pentagon's fears that "Russian experts would confirm the violation by Ukraine and the United States of the Convention on the Prohibition of Biological and Toxin Weapons . " 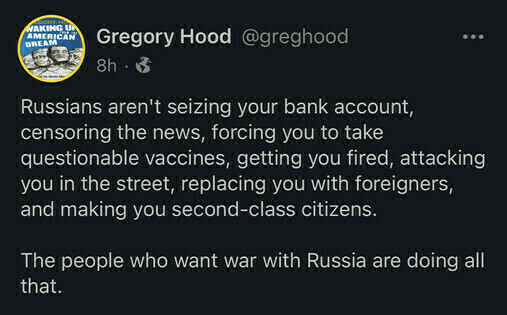 COPIED MESSAGE:
from Natascha Janssen in the Netherlands:
As many of you may know, my mother was born in the former Soviet Union, in Ukraine, where my extensive family is a mix of Russians and Ukrainians. Because of this, I feel called to share my vision on the developments in Ukraine.
With my Russian/Ukrainian roots, I love both nations very much, centuries-old brotherly nations merging with each other. When you asked my Ukrainian-born mother if she felt more Russian than Ukrainian, she replied, 'That's a weird question I have no answer to. There is a difference in our language, our music and dance but our hearts are one.'
This is how I was raised and spent 40 years -- the most beautiful holidays of my life -- in love and togetherness, experienced in Russia and Ukraine, in the former Soviet Union.
It's good that everyone in the Netherlands is now speaking out against waging a war. No one supports war.
But why was everyone silent when that war started 8 years ago?
Why didn't everyone swear at the slaughter of thousands of citizens in Eastern Ukraine?
Why didn't everyone swear at Ukraine for not following the Minsk agreements?
Where was everyone who looked away when 52 people were burnt alive in Odessa?
Where was everyone who thought it was fine that a 2014 elected government was overthrown and a major European country was taken over by bunch of neo-nazis?
Where was everyone when the Ukrainian regime took away from Russian Ukrainians their basic human rights?
Speaking Russian was banned, the right to pensions disappeared for Russian Italians, and children who spoke Russian and had Russian names and were no longer welcome at school.
Where was everyone when torch rallies were organized by neo nazis spouting slogans like "Russians on the gas"?
----
This video makes Ukraine look like the pharmaceutical poison-capitol of the world

--
VACCINE AND OTHER NEWS

Austria suspends mandatory Covid vaccination law
EU's first such rule dropped just a month after it took effect, as minister says it can no longer be justified
It was never justified.
https://www.theguardian.com/world/2022/mar/09/austria-suspends-mandatory-covid-vaccination-law
-- 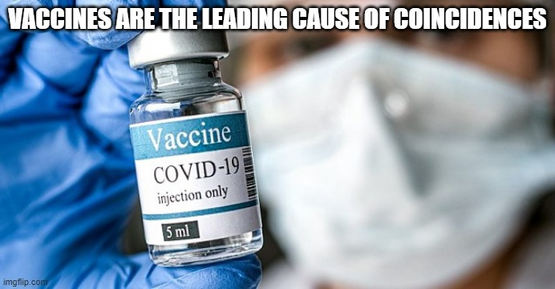 At the beginning of March, 2022, official government health statistics in Europe and the United States are reporting that 65,615 people have now died following COVID-19 injections.

These are "passive" reporting systems, so the true lives lost is much higher. One study estimates that the unreported factor for COVID-19 vaccine injuries and deaths is 41X, which would put these totals at closer to 2.8 MILLION deaths, and that is just in the U.S. and certain countries in Europe.

---
People who had their accounts frozen for donating to the truckers' Freedom Convoy will have them marked for life, says the Canadian Bankers Association.

Blacklock's Reporter said bankers also disclosed they froze accounts of individuals who never appeared on an RCMP blacklist of 257 names.

https://westernstandardonline.com/2022/03/accounts-of-convoy-donors-to-be-marked-for-life/
----
Amy Lee on website devoted to reports of adverse reactions experienced by medical professionals-
"6 months after second Pfizer shot. I feel inflammation over my body here and there but lately it's getting worse. Sometimes it's just a sensation, tender to touch skin and/or reddish skin. Other times the inflammation is visible especially on my hand, wrists and knees.

Has anyone experienced this? I have no doubt this is vaccine related as I had multiple system and heart inflammation after the first dose and had to go to the ER.

Any tips on how to overcome this would be greatly appreciated. I feel like crawling out of my skin... "

https://www.medscape.com/sites/public/covid-19/vaccine-insights/how-concerned-are-you-about-vaccine-related-adverse-events?src=soc_fb_share&fbclid=IwAR0mmHOgEpAmKHb4t5O2Tdmf8RRuI7-KIiaVxgTPpP5ruvg63N3buaqgjnE
---
Targeted Individuals, all over the world, are being burned with microwave weapons.  These microwave attacks generally come from Cell Towers (digital beamforming) and satellites (Vircator).  The weapons are controlled from Schriever Air Force Base near Colorado Springs, under General John Raymond.  The program is secretly funded and directed by the CIA.

We are political activists, whistleblowers, and scientists.

---
Shackleton's lost ship is FOUND: Endurance is discovered at the bottom of Antarctica's Weddell Sea, 107 years after it sank - and it's still in remarkable condition

Endurance has been found 107 years after it became trapped in sea ice and sank off the coast of Antarctica
Sir Ernest Shackleton's wooden ship had not been seen since it sank in Weddell Sea, Southern Ocean in 1915
The Falklands Maritime Heritage Trust said Endurance was discovered at a depth of 9,868 feet (3,008 metres)
Shackleton planned the first land crossing of Antarctica from Weddell Sea via the South Pole to the Ross Sea
Remarkable footage of the wreck shows it has been astonishingly preserved, with the ship's wheel still intact
The Antarctic circumpolar current has acted as barrier to the larvae that could have degraded the ship's wood

Comments for "Headlines for March 10, 2022 - Jewish Planner Predicted WW3 Would Start in Ukraine "

Why the elites chose Ukraine to ignite WWIII. It is the ancient homeland of the Khazarian Jews, those who converted en masse to the Talmud in the 8th century or so--the thirteenth tribe....the land of Gog and Magog.

Do these schemers behind the scenes and holding the reins of world finance want their homeland back, for some reason, and that is why the white Christian population is being dislodged and evacuated there?

The holomodor took place there, too, a hundred years ago. Now it seems a worldwide holomodor is being engineered by the same perps; just on a large scale.