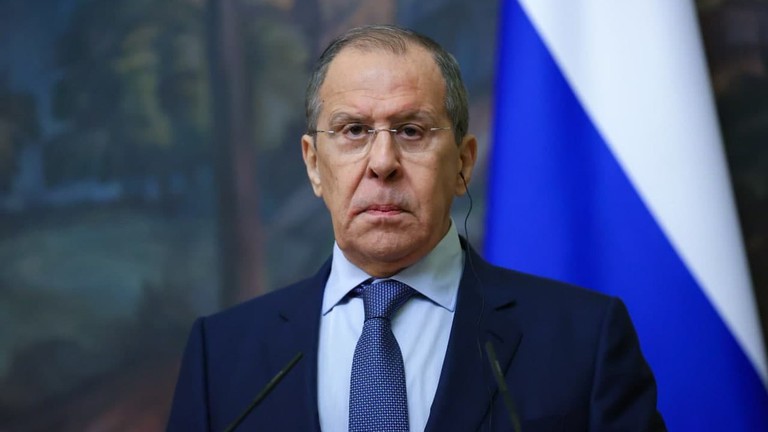 (Russian Foreign Minister Sergei Lavrov)
Please send links and comments to hmakow@gmail.com
Russia seeks to end US-dominated world order - Lavrov
Washington acts based on ad-hoc rules that violate international law, foreign minister claims. "Our special military operation is meant to put an end to the unabashed expansion [of NATO] and the unabashed drive towards full domination by the US and its Western subjects on the world stage," Lavrov told Rossiya 24 news channel.

"This domination is built on gross violations of international law and under some rules, which they are now hyping so much and which they make up on a case-by-case basis," he added.

Makow- The US, and NATO are Rothschild sock puppets.  They're putting the covidscam on the back burner
because Russia has rebelled and they may need us as canon fodder.  Russia is the last bastion of civilization so the satanist bankers must destroy it.
I put the chances of a nuclear war within the next 1-3 years at 50%. The West is trying to goad Putin into striking first. Hopefully Putin will exercise restraint and let the morally-bankrupt West implode.
----
Why Russia is Invading Ukraine  -- Video with 16 million views

Commenter-- "An absolutely masterful breakdown of Russia's strategic interests and motivations around this situation. Thank you."
-----
We start with the biggest scoop today. We finally have high level confirmation from Russian officials that NATO instructors and foreign fighters are in fact trapped in Mariupol.
https://thesaker.is/sitrep-operation-z-7/

Sitrep: Operation Z
--------
Notice the Cabalist media is changing its tune re. covid, trying to gain a fig leaf of credibility.
"Lockdowns were a failure -- Red States were right!"  - You see, the media are our friends!
"Proof that blue states DID fail during the pandemic: Draconian lockdowns caused huge deaths rates, ruined kids' education and destroyed business, bombshell research FINALLY shows - with NY, NJ, CA and IL all receiving an F-grade"
https://www.dailymail.co.uk/news/article-10708225/The-states-FAILED-protect-people-COVID.html

--
They are also turning on Biden. Perhaps he lacks credibility as a war time leader. I think they want Trump for that part.
"Biden could be impeached for this: Charlie Hurt" 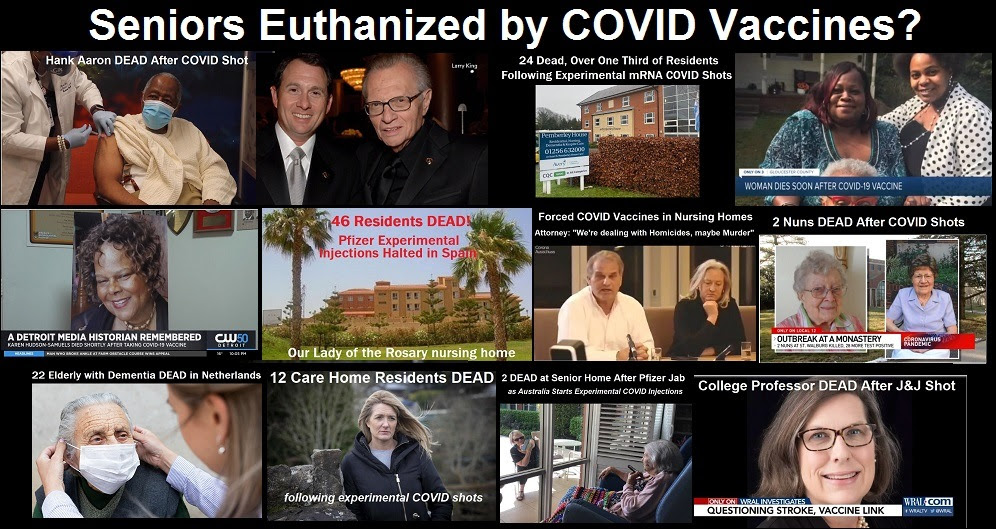 22,000% Increase in Deaths following COVID Vaccines for Adults Over 50 as FDA Authorizes 2nd Booster for this Age Group

Do you think the FDA looked at the data in their Vaccine Adverse Event Reporting System (VAERS) regarding COVID-19 vaccines for this age group to see if there were any concerns before authorizing a second booster shot for this age group?
Not likely.

https://prepareforchange.net/2022/04/10/22000-increase-in-deaths-following-covid-vaccines-for-adults-over-50-as-fda-authorizes-2nd-booster-for-this-age-group/?utm_source=rss&utm_medium=rss&utm_campaign=22000-increase-in-deaths-following-covid-vaccines-for-adults-over-50-as-fda-authorizes-2nd-booster-for-this-age-group
The Flu Mutated into "COVID" with Astonishingly Similar Numbers
One for one, covid is the flu re-branded
https://www.reddit.com/r/conspiracy/comments/u13j5q/the_flu_mutated_into_covid_with_astonishingly/
-----
Reader--  "the info presented is a blockbuster & needs to get out."

Mark Trozzi  MD
We dive into the W.H.O.'s covid scam and their abuse of us all, assess our current situation and the imminent threat that the W.H.O poses, plus explore how we plan to stop this and restore human rights and the rule of law to our world.
https://drtrozzi.org/2022/04/11/dr-mark-trozzi-opposes-who-pandemic-treaty-rebel-news/ 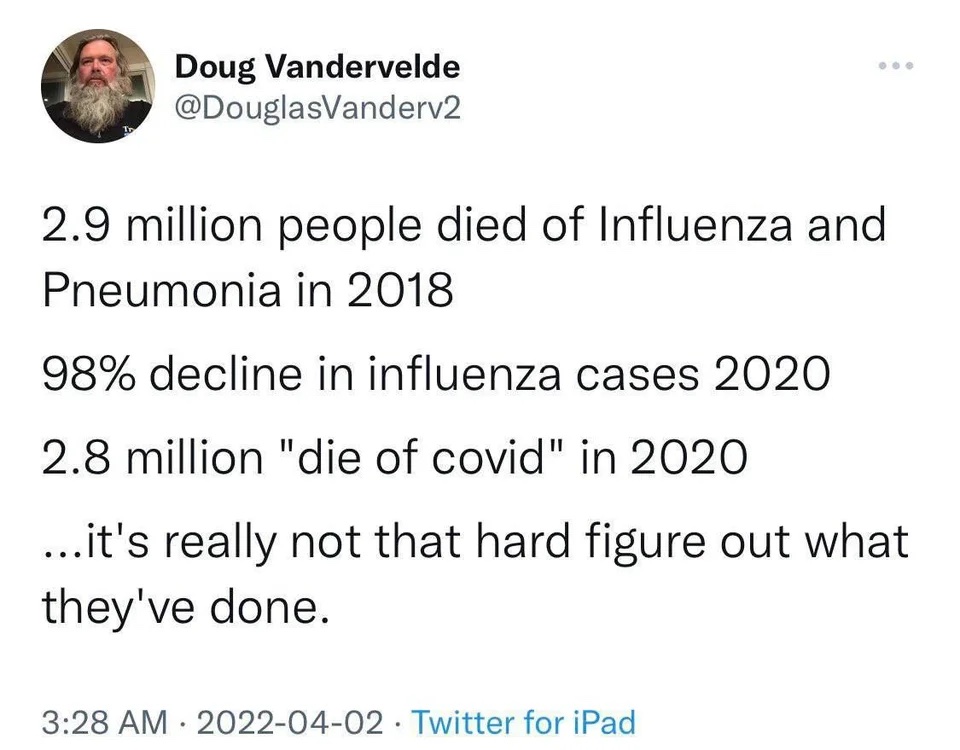 SHANGHAI -
As everyone watches the current show in the theater called "Ukraine" today, thousands of people are committing suicide in Shanghai, China, as its 25 million residents continue to be locked down and many of them reportedly starving.

Protests and looting have reportedly started, and horrible images are appearing of people jumping to their deaths from buildings while others hang themselves. Dogs and cats are being murdered on the streets.

And this is Shanghai! Shanghai is the most modern city in China. It's financial and shopping district would rival Manhattan in New York, the Magnificent Mile in Chicago, or Beverly Hills in Los Angeles.  If this can happen in Shanghai, it can happen anywhere.

This is VERY GRAPHIC! It will disturb you. But the Big Tech social media platforms are censoring much of this, and I am not seeing much of this at all in either the corporate media nor the alternative media.

But it should be headline news everywhere right now!
https://healthimpactnews.com/2022/protests-looting-pets-destroyed-and-mass-suicides-in-shanghai-china-as-people-starve-during-lockdowns/

Exiled Chinese billionaire who was an insider in Xi Jinping's circle posts video of the reasons China is imposing harsh lockdown for zero COVID policy: To force starvation and humble the masses and make them depend on the Party for survival. 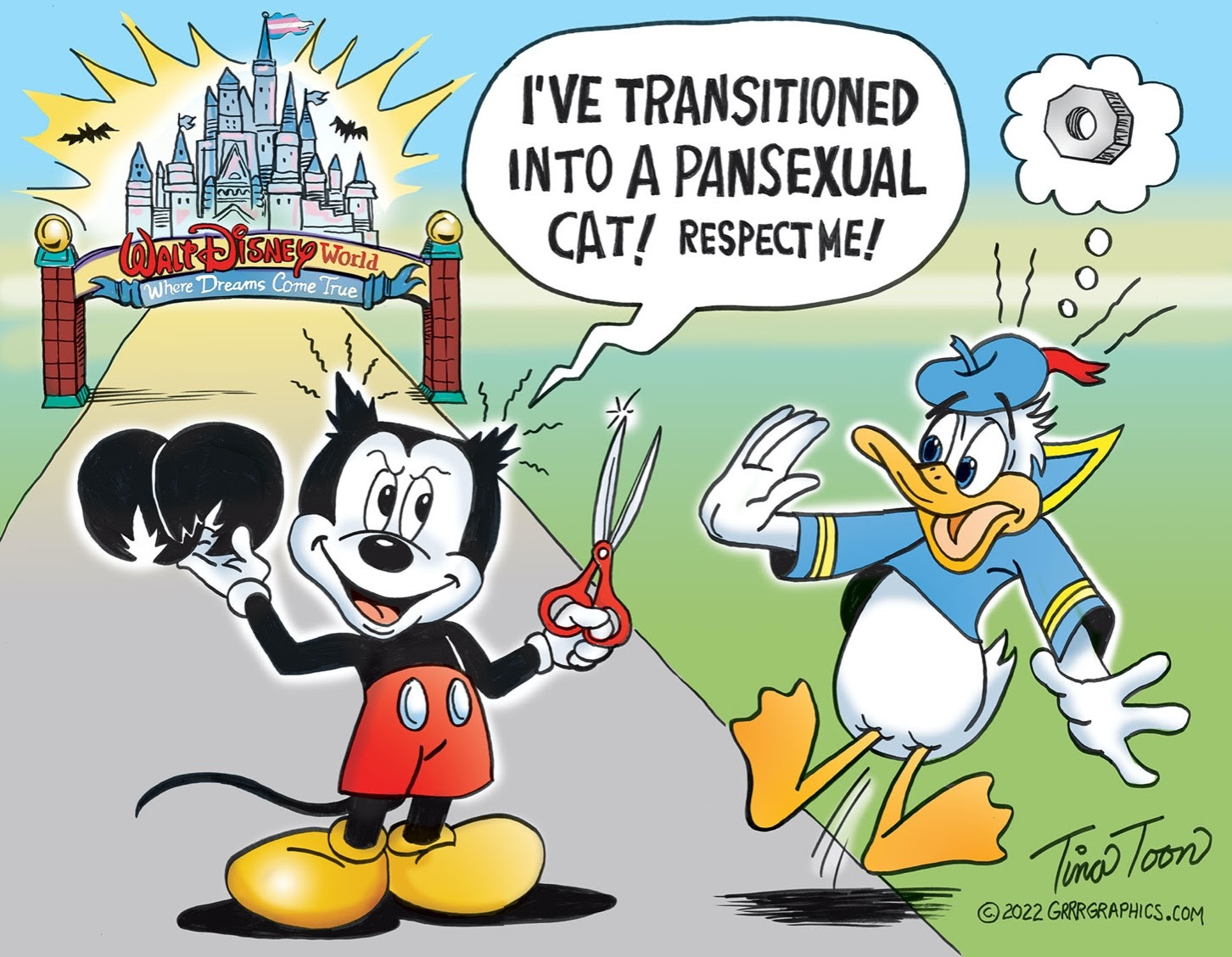 The CFR's true, secret goal, is the elimination of 85 percent of the world's population as the first step in establishing a New World Order -- a communo-fascist totalitarian dictatorship with just two social classes: the all-powerful masters, living in opulence, and the other 99 percent of the population, made up of oppressed serfs, with no rights at all, living in the most abject economic and moral poverty under a total surveillance police state. Is it time to overthrow the Invisible Government of the United States?

False Flags: From 9/11 to Sandy Hook and Beyond - A Presentation By James Fetzer (Video)

--
I believe this is true and it certainly calls into question Russia's status as the bastion of civilization.


The latest report today released by the special commission alleges that the April 10, 2010 crash was caused by an intentional detonation of planted explosives.

--
We live in a sick society. Covid hysteria is a form of self expression.