Our "Leaders" are Guilty of High Treason, says Real Pope 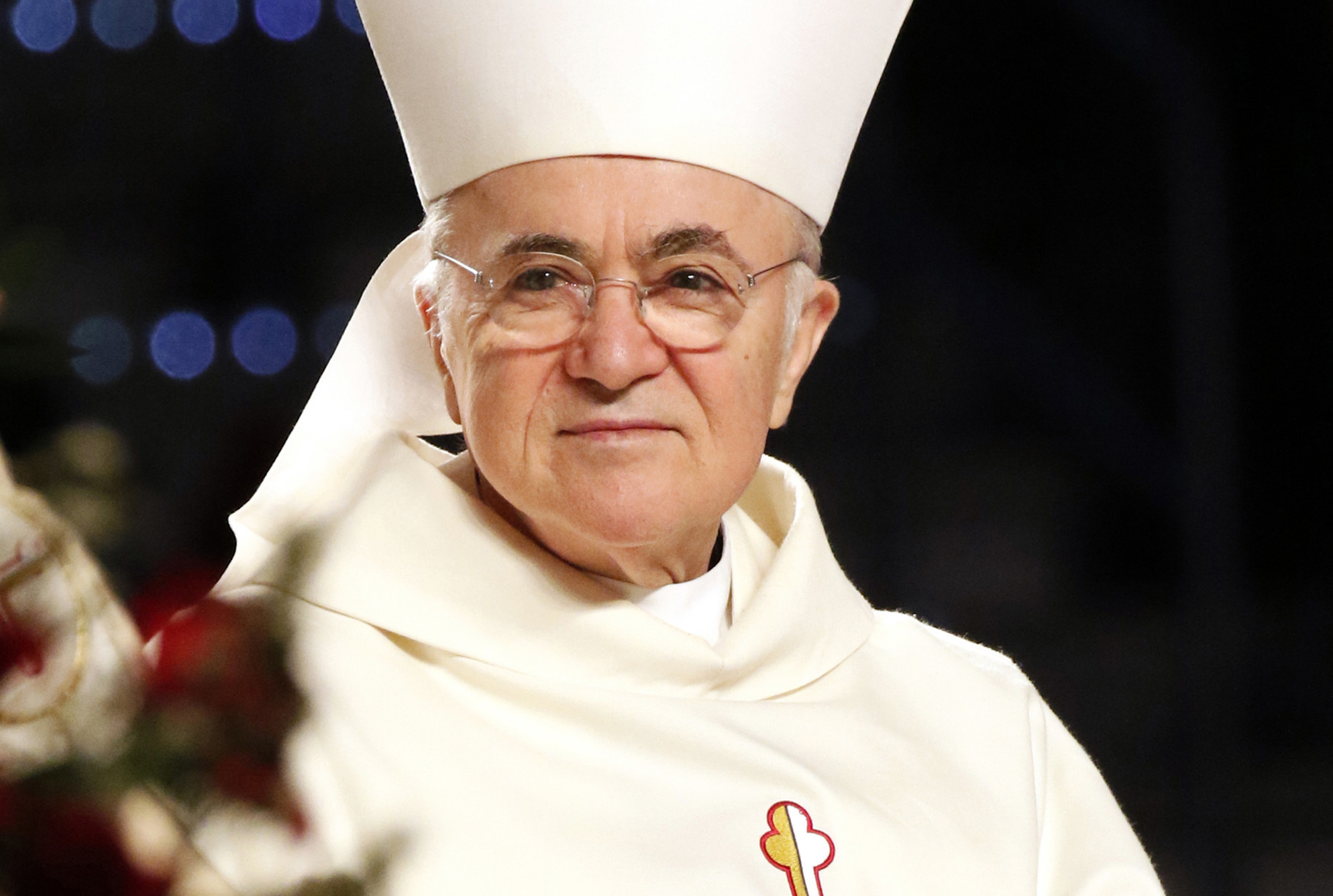 Source
by Archbishop Carlo Maria Vigano
(henrymakow.com)
In the coming days, the Nations that adhere to the World Health Organization will vote on resolutions regarding the WHO's management of pandemics. These resolutions will transfer sovereignty regarding the health of citizens to a supranational body that is largely financed by the pharmaceutical industry and the Bill & Melinda Gates Foundation. If these resolutions are approved by a majority, the WHO will have exclusive international authority in the case of a pandemic to impose all the rules, including quarantines, lockdowns, obligatory vaccinations and vaccine passports.
It should also be borne in mind that this organization enjoys immunity, and thus its members cannot be either tried or convicted if they commit crimes. Un-elected technocrats will paradoxically have more power than that which citizens confer on their representatives by means of their democratic vote.
Given that the yielding of sovereignty is considered the crime of high treason by the laws of every nation, and that Parliaments may not legislate against the interests of the Nation, much less violate the natural liberties and fundamental rights of the citizens whom they represent. I believe that it will not escape any one's notice that this attempt by the WHO to appropriate a power that properly belongs to individual Nations is intended to impede any sort of opposition to the Agenda 2030, which in the field of healthcare also aims to accomplish the drastic reduction of medical and hospital services, the privatization of the health industry, and disease prevention by means of vaccines.
The psycho-pandemic has demonstrated the enslavement of rulers, the political system, the media, the judiciary, the entire medical industry, and eventhe Holy See itself to the diktats of a group of functionaries of a supranational entity that has a blatant conflict of interest. The disastrous adverse effects  of the experimental mRNA serum are only now being recognized, while there are many who rightly expect that those responsible for these decisions ought to beheld accountable before an independent court.
It therefore sounds absurd, to say the least, that there is now a desire to give binding decision-making power to the WHO, when in its management of the recent emergency pandemic and the vaccine campaign the greatest damagewas done in terms of the number of deaths and of patients who have suffered permanent damage to their health.
In addition to the impunity it enjoyed for the crimes it has committed thanks to the silence of the mainstream media, the WHO also has total discretion over how to respond to the upcoming emergencies that are obviously being planned by the pharmaceutical lobby.The marginalization of health personnel who appeal to the Hippocratic Oath risks becoming the norm by which to eliminate every voice of dissent.
In this regard, it is significant that the Nations that oppose the New World Order - like Russia and Brazil - are aware of the very serious consequences that the ratification of these resolutions would entail, and for this reason they are opposed to their approval. During his term of office, President Trump also sent an unequivocal signal by halting funding from the U.S. Treasury to the WHO.
This was one of the reasons that the deep state blocked his re-election in 2020, supporting a compromised and corrupt individual whose son Hunter is involved in financing American biolabs in Ukraine. I therefore express my full support for the citizens - especially scientists,doctors, and legal experts - who are denouncing this threat to the national sovereignty of the adhering Nations, and who are asking for light to be shed on past events and on the consequences that the decisions of the WHO have caused for the health of the world population. I exhort heads of state and government leaders who will be called to express their views about theratification of these resolutions to reject them, since they are contrary to the common good and intended to carry out the global coup that the WHO and theWEF have planned for years under the names ofthe Agenda 2030 and the Great Reset.
Global health governance is one of the fundamental elements of the New World Order, as has been made clear by authoritative experts who arenot compromised with the system, and as such it must be rejected and opposed. The logic of control, profit, and mass pathologization must be replaced with a public health policy that has as its primary goal the health of citizens and the protection of their inalienable rights. The Holy See - which is a Permanent Observer at the United Nations and also at the WHO for one year now - has the duty to reaffirm the right of individuals to accept or refuse health treatments, especially in the face of the concrete danger of adverse effects, which are still partly unknown, from this experimental genetic treatment.
And if up until now (Pope) Bergoglio and his cabal have indulged the delusions of Gates, Schwab, and Soros, the time has come for the Catholic Church to defend the weakest, the defenceless unborn,children, and the elderly, as well as those who have been blackmailed by the cynicism of businessmen and conspirators in order to force them to be inoculated with a serum contaminated by aborted fetal cell lines. The present conspiratorial silence of the Vatican, after the hasty pronouncements it madeat the beginning of the pandemic and its shameful endorsements of BigPharma, will be imputed to the condemnation of the Roman Sanhedrin, which has made itself an accomplice in a crime against God and man.
Never in all of history has the Hierarchy prostituted itself to temporal power in such aservile and abject way. Let us pray that some Bishops will find the courage todistance themselves from Bergoglio's collaborationist line and find the wordsto open the eyes of those good people who have thus far been deceived byglobalist propaganda.
+ Carlo Maria Viganò, Archbishop, May 21, 2022
News story that summarizes the main points
Interview with Archbishop Vigano
Vigano inherited millions from his father

Comments for " Our "Leaders" are Guilty of High Treason, says Real Pope"

Father Vigano is a typical representative of the false opposition. He talks about politics and not theology. This is why he is read and praised by many sincere people with a good mind but no knowledge of Catholic doctrine.

Yet, this is where one must look to discern his imposture. He uses the title of Archbishop (and even Cardinal) to impress the uninitiated, even though he is just a priest, having been ordained according to the modus operandi prior to 1969, when the conciliar sect invalidated most of the sacraments, including that of Holy Orders (consecration of bishops).

He seems to criticize Francis, but does not say, nor has he ever said, a word about the reversal of doctrine brought about by Vatican II, to which he adheres and which was none other than the Revolution of 1789 in the Church. Vigano objectively belongs to the anti-Catholic conciliar sect, an essential component of globalism, which has a "spiritual" dimension: the false universal religion. But, as the Psalmist wrote: All false gods are demons (Ps 96:5).

Vigano is a false prophet, a ravening wolf in sheep's clothing, like Trump and Putin, whom he supports. He has exposed his love for the goods of the earth - which he should despise - with the monopolization of the money belonging to his brother.

Vigano is taking an important stand and would be a huge improvement on the imposter Francis.

The reason we have no leaders is because of nitpickers like you who stab them in the back.

What we are witnessing in Ukraine (and in the past with, for example, the antagonism between a nationalist Stalin and a stateless liberal Trotsky, i.e. a leftist) is a death struggle between the right-wing Jews (Putin, Trump) with ties to the Lubavitchs (e.g. the chief rabbi of Russia Berel Lazar) and the atheist leftist Jews (Soros, Zelensky et al.).

Both clans are globalists (evidence abounds) but with different conceptions (unipolar vs. multipolar world among others).

To support Putin or Trump (and therefore Vigano, who "rolls" for them, is to fall into the trap of presenting to the uneducated public the war of the Good Guys (Putin, Trump) against the Bad Guys (Soros, etc.) while masking Putin's real objectives. Putin, who, let's not forget, is allied with the worst communist dictatorship on the planet. China, which is a rather elaborate model of what awaits us.

I refrain from providing the most stunning extracts from Utopia so as not to lengthen my prose.

In conclusion, expecting something from Vigano is absolutely vain, except to wish for the victory of the communist-nationalist camp over the communist-leftist camp.

I don't think anyone here, starting with Henry, wants communism to win, even in the nationalist version… Version, which, I concede, still retains some healthy and natural aspects, such as, for example, the rejection of institutionalized homosexuality. But it is indeed globalism with communism in the background. Maybe Stalin was better than Trotsky, but do we want to be Stalinists??