9-11 : The Oppressor Uses the Mind of the Oppressed 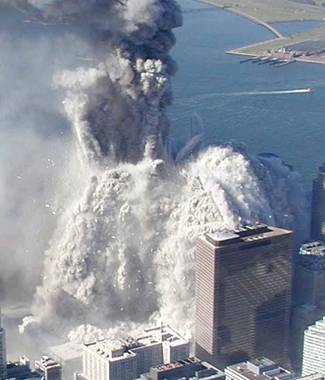 We give our power away to the tyrants by our willingness to believe what they say instead of what we observe.

"Once the truth about the magician's trick is revealed, the show is over."

CinqueTerra
by Robert Cinque
The Oppressor uses our humanity as a weapon against us. Our ability to feel compassion for victims of a crime, to take action in their defense, to hold the perpetrators accountable, is the Controller's weapon of choice. This is why false flag attacks are staged, to arouse a righteous indignation against the enemy who must be hunted down at any cost.
This is why those who believe the official government story of 911 about 19 hijackers cannot fathom how anyone could possibly question America's rise to the occasion in confronting ruthless terrorists who killed innocent people and who somehow have the ability to overcome our $60 Billion defense network and pulverize a million tons of steel and concrete in 10 seconds.
Undaunted by the facts of physics, believers in the official story make a cause and effect relationship between planes and fires and the disintegration of the buildings.
The fact is the planes and fires had nothing to do with the disintegration of the buildings which was the equivalent of "sticking a pencil through a screen door", according to the architect of the WTC complex.
The fact that the buildings hit the ground in 10 seconds led researchers to conclude that explosives or nukes must have been employed, but further research shows that neither nuclear bombs nor nanothermite could possibly do the job because there were no chunks of the building, no rubble, only dust and a pile of debris not more than 2 stories tall.
110 stories should have produced a pile around 30 stories and we should have seen desks and toilets and big slabs of concrete, but there was mostly just dust. That dust contains within it microscopic iron sheres, smoking gun evidence of aerosoled molten steel, caused by high heat and explosives. But what explosive could possibly have turned the buildings to dust in 10 seconds? Furthermore, the Towers should have produced a seismic signal of 6.0, not the 2.3 that was recorded. Dust doesn't make a thud.
Whoever demolished the WTC Towers apparently used a weapon that utilizes the nuclear bonds within the molecules of the buildings themselves.
The Towers appear to be ripped apart and turned to dust. Forensic scientist and researcher Dr. Judy Wood points out that the Towers look like giant trees that turn to sawdust from the top down, not the bottom up, as in ordinary controlled demolitions.
Common building demolitions knock out the lowest floors and use the top of the building a big hammer to fall into its footprint. The Towers disintegrated from the top down. Think about that. What does that mean? It means that most of the buildings never hit the ground, they floated away as .01 micron dust. What kind of energy source has the ability to turn a million tons of matter into fine dust in 10 seconds?
Fourteen Firefighters trapped on the 2nd, 3rd, and 4th floors of the north Tower survived. They were about to be crushed and kept waiting for the end to come because they knew the building was falling. Instead, they looked up and saw blue sky, 106 stories of building had disappeared above them. Read their compelling testimony in Wood's historic and comprehensive analysis of 911 "Where did the Towers Go?
The Towers disintegrated from the top down. 911 was staged as a coup d'etat of the human mind and it is far worse than a sinister conspiracy, it is a relationship that humanity colludes in.
We give our power away to the tyrants by our willingness to believe what they say instead of what we observe. It is successful to the extent that we are willing to believe what we are told instead of what we observe.
The truth is always senior to beliefs about it. The truth is always factual, does not need theories to explain it. Evidence is not theory. Evidence is the artifact truth left behind. We need only to observe the evidence and let it speak. Then, we can proceed to bring the real perpetrators to justice.

Comments for "9-11 : The Oppressor Uses the Mind of the Oppressed"

Kudos on your series of postings supporting Dr. Judy Wood and Co's work, like this latest gem, 911:The Oppressor Uses The Mind of The Oppressed.

It is plain to see from the way the towers came down (Building No. 7 coming down more in the manner of conventional controlled demolition, but like the Towers, leaving a debris-pile a fraction of the height of what should have been left for a 47 story building using ordinary controlled demolition) that something more than just ordinary explosives had to be used, the weird anomalies being far beyond the capability of any amount of conventional explosives packed to the gunnels inside the towers.

What is required is the application of the good old process of elimination: ruling out all the possible candidates (airliner impacts, jet fuel fires, shapecharges, nukes, thermite, thermate, nano-thermite, D.E.W.s ect.) based on empirical evidence, and selecting out the one that works best. But even mentioning them seems to just play into the controllers' hand: creating confusion in the public mind to where it can't decide what is true any more, its collective mind shutting down and finally surrendering to the official story anyway, especially when the the weirdest one of them all -- one that officially isn't even supposed to exist -- is the best at explaining all the facts, anomalies and evidence: D.E.W.s.

Judy Wood's book "Where Did the Towers Go?" has enough evidence to put a whole lot of the "real" criminals behind bars if her findings were traced to "Who". Clearly, only few nations can lay claim to nano-technology able to pulverize the WTC, and let us not forget the unreported Hurricane that day off the east coast. BUT, Judy Wood was/is undermined by the "truth-movement"which eluded to some other theories that were and are used to ostracize her. It is simply wrong. A lesson to be learned is that the "truth-movement", as well meaning as it is and can be, is divided. Ultimately dividing truth into sections of information denied and / or ridiculed.

THIS IS WHAT REALLY HAPPENED ON 9/11

Psychologists analyze why some people are in denial about what really happened on 9/11 in spite of overwhelming evidence. [It is called cognitive dissonance based on fear and the dread of being helpless.] YouTube Posted 2012 Sep 5

The full-length documentary is available at:

The problem of course is the "we" being referred to

If you look at your your own individual workplace as a microcosm you'll find people who are represenative of the mass denial that's out there. They don't wanna hear it. The truth makes them uncomfortable. They may as well be sticking their fingers in their ears going "nyahnyahnyahnyahnyah..." like when they were kids.

This state of mass hypnosis is stunning. Most people are preoccupied in a false state of 'pursuing' happiness (and I always thought using the word "pursuit" in the Declaration of Independence was a mistake) Of "living Life to the fullest", or "making the best of it", without realizing how numb they really are.

But articles like this are instructive. I obviously know the tragedy of 9/11 is no joking matter, but when it comes to the absurd nature of hypnosis the best thing to do is relate this kind of information to our brainwashed brethren and laugh over their believing that onion they are biting into is a nice juicy apple.