Please Ron, Get a Clue 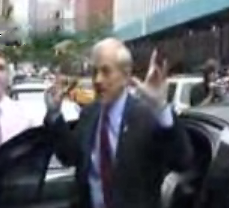 Why Can't He Just Wave? (Is there anything more all-American, and inclusive?)

A reader has pointed out that  Ron Paul has a habit of flashing something like the horned goat handsign . She sent 5 "You Tubes"  in which he does this and as a result, she has now withdrawn her support. She notified his campaign manager who laughed it off as the "rock on" sign.

She says Paul has been on Alex Jones show and should know the significance of this sign, which Illuminati like Clinton and Bush flash regularly. She also points out that Paul worked for Ronald Reagan who was certainly Illuminati. Reagan was for small government and against abortion as well.

True, the thumb is in a different place than the horned goat. It is extended rather than folded over the fingers. Some say this is the "Hawaian universal hang loose" sign. Others say it is "I love you" in universal sign language or the sign of "The UTexas Longhorns." Whatever. It is much too reminiscent of the horn's goat which all Illuminati members use. (Obviously they are going to say it means something else.)

How can we support a man who doesn't understand such a basic point? Why is a 72- year-old physician pandering to youth? His supporters aren't hippies or rock concert go'ers. Paul should address this issue. Is he Illuminati?

see homepage www.henrymakow.com for Paul giving what look like masonic handshakes to Ben Affleck and P.J. O'Rourke on Bill Maher's show (scroll down)

Comments for "Please Ron, Get a Clue"

n Canada the monetary reform people are located at www.comer.org Everybody has different theories of how to solve the 'debt crisis' etc. And many of the reformers such as what was presented on the "Money Masters" video or the Gold Standard folks are usually off the mark. Things desperately need to be simplified in this area. Here's some basic observations:

-since Canada's beginning in 1867 till today, it has paid off it's national debt by a factor of 16 or more. So obviously we or any country don't need to pay more. Any schemes to do so are flawed, the debts just need to be written off. Obviously assassinations would ensue if this were attempted.

-one of the main problems with Money is that it has to be paid back, returned to the bank, and taken out of circulation. That is because almost all money is created as a loan from a bank. All money is an illusion then, it is temporary, in circulation with a shelf life of the time of the loan repayment. And government gives banks the legal right to create this 'temporary' money. An article at
http://thecottageeconomist.com/your-finances/how-banks-make-more-money-on-foreclosures-than-on-good-borrowers/
explains how banks really make their money, it's not on the returned principal, which they aren't allowed to keep.

If our government wiped out it's debts and then created say $100,000 to give out to every citizen with the proviso that it didn't have to be paid back - that's an example of how the economy could get a solid money supply. Lincoln's greenbacks were a similar idea. All other monetary reform schemes that don't address the fact that money is created with a limited lifespan miss the point (debt should also have a corresponding limited lifespan as well). You either have Permanent money (created by the Treasury, or Gold/Silver - poor choices) or Temporary money (current system). But to have permanent debt in either system is just a complete (Satanic) joke. How many reformers have figured out this point?

Ron Paul seems like an accessible type of guy, why doesn’t someone ask him about the hand sign? With no other dirt on the guy and a reluctance to attack him on the issues he espouses, the establishment seems to be trying to use the paranoia of his supporters to discredit him.
---

I noticed that there is a letter of concern about the gold standard, being proposed by Ron Paul, on your webpage now. I was actually logging onto your page at the time to address just that concern. I agree with much of what Paul has to say, but as has been noted on your site in previous letters, propaganda has to contain a lot of truth so that it will be digestible.

Indeed, the wealthy have been keeping gold prices artificially low over the past century, and buying up massive reserves of it. Another little known, but significant thing to mention is that a process has been invented to create gold by decaying mercury using radiation from a nuclear reaction. Thus, I see a switch back to a gold standard as useless. Obviously, the wealthy bankers who currently control the fiat system, also have control of the gold. What good will a small amount of circulating gold do us if we can't eat in the near future?

It seems to me with tough times ahead, it would make more sense to be buying tools, tents, seeds, guns, food, knives, etc. Gold will be useless when chaos hits. I think that the drive to push people to purchase gold is just a shiny distraction. I remind you that the first mention of the number 666 in the Bible relates to the number of talents of gold that Solomon had received in taxes.

The economic history of the US while it was on the Gold Standard (see, for example, the book "The Great Red Dragon" by Woodfolk ) shows how mercilessly the economy of a nation on the gold standard can be manipulated - especially by those who have large reserves of gold, such as the Rothschilds. In fact, until very recently, the Rothschilds used to the fix the global price of gold twice daily.

It is far better to regulate the money supply by tying the value of the currency to a diversified basket of commodities and labour, rather than exclusively to gold.

I wrote to Ron Paul, on both his campaign email address as well as his House of Representatives email address, suggesting to him that his Gold standard policy was misguided.
No reply, and he continues to talk about the Gold standard.

It is true that his non-interventionist message undermines the neo-con manufactured consensus. On the other hand, he never talks about the real issues - such as the vice-like grip of the Zionist plutocrats on Western societies. Add to that his dangerously misguided gold standard policy. So it's very difficult to give him a whole hearted endorsement. But Mike Gravel endorses global warming and carbon taxes and Kucinich wants to confiscate guns! Doesn't seem there is anyone really credible out there.

Let's not be naive here. Given the level of technology that is known regarding mind control / influence (never mind what they understand or practice that has not been leaked or written about), anyone can be taken and changed, and thus controlled. Including you and I Henry. In my opinion, I figure there is a 99% chance that Ron Paul is currently entirerly under "their" control, because why would they risk someone rising to power (albeit in limited capacity as President) and foiling some of their plans??? It is child's play to break into someone's home at night, neutralize any bodyguards or guard dogs, inject them with hypnotic drugs, subject them to a variety of frequency devices and erase or create any number of memories or agendas that would seem perfectly real to the subject.

This reminds me of a documentary I watched on Hugo Chavez last year (can't recall name), that detailed his rise to power, then "attempted" over-through. The most important detail of the entire debacle (which was totally glossed over by the film makers) was the fact that Chavez was mysteriously abducted by some US military force and taken to some island (base?) for many hours just prior to him being reinstated. Well, I wonder why??!! A handful of hours is more than enough time to install serious programming into any human being. Thus, Chavez should be considered suspect, despite hurling well deserved vitriol at Bush and the Bandits. Ergo, Ron Paul as well.

Similar things happened to the comedian Dave Chappel (sp?), who stepped on the wrong toes and got seriously messed with. I read a blog created by a friend of his that discussed many bizarre things that never got mentioned in the media, naturally. The only thing that puzzles me about the Ron Paul thing is that the hand signs seem a little too obvious. Why now, and why so frequently? As depressing / paranoid as it might be to consider during these current times, we must be very suspicious of anyone who is on TV or gets published in the mainstream media because of how controlled these outlets are. I hope I am completely wrong about Paul, but even if I am, we all know there are many ways to manipulate elections anyway, so we will have to contend with another Clinton and get dragged down even further. How low do we go before we really fight?

HI,
I have just read your article about the sign of the devil being flashed about. Whatever it is throughout other places, please keep in mind it is the sign of the football team at the University of Texas. Hook 'em horns is flashed whenever to Longhorns see each other. I am sure that most people in the state of Texas use this sign as a recognition of the University of Texas Longhorn football team.

I am a faithful reader of your website and I thank you for providing this information to everyone who will read with an open mind. I am with you all the way on this.

The handsign of Baphomet predates the Texas Longhorns. The team sign doesn't account for the fact that Illuminati leaders from all over the world use this sign. They would never get young people to use it if they were up front about its meaning. So they say it is "love" "rock n"--this is the way satanists work.

We can't be in denial about this. Ron Paul is showing very poor judgment. I want to believe that that is all it is.

have just read your "Please Ron, Get a Clue" and also watched the videos: obviously, Ron Paul is making the sign. He makes it in the same way than Clinton -with the tumb extended. Here in Hungary, the current neo-liberal PM (pretending to be "socialist") as well as the previous one were also seen making the sign. Do you think the videos on U-Tube could be manipulated by them in order to besmear Ron Paul? I hope so because, If the videos are not manipulated, then I would say Ron Paul is probably one of them and... do you know what this would mean? This would mean very simply that, whoever will be elected in 2008 -Clinton, Giuliani or Ron Paul- we shall anyway have a nuclear war between the West and the East in the next five or six years.