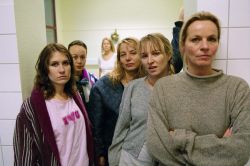 As promised, enclosed is a collection of `news`paper cuttings which is entirely representative of the level of androgyny here in `Old` Denmark.

I have tried to show how for example, that when an `educational facility` wishes to promote it's courses, it invariably does so by using images of female students or pupils. This gender bias is `across the board` in all walks of life here.

I have included `ads` for hairdressing salons with pictures of `women` stylists, proudly wearing the uniform standard short hair cut which they promote, and which can be found on the heads of 90% of women in their late 20's and upwards. Similarly, you will note the complete lack of any `femininity` in the pictures, particularly the total absence of any effort on the part of the women to look, well, like women.

Trousers/Jeans are uniform wear for women here, and Skirts/Dresses more or less non existant, particularly as daywear. Being attractive and feminine is very low on the prority scale here.

Look closely at the men. How weak and subdued they appear, and they are exactly that.

This is a very fair representation of the Danish human landscape. It's ugly and it is shocking. To be honest, the photographs do it too much justice. Only a week or two of intensive submersion in this most grim of societies can give a true impression to the uncorrupted normal human being.

Some years back, we were at a small Airport near here, when I heard two very scruffy young girls of around 17 years of age, speaking with a North American accent. I engaged them in conversation as I am want to do and discovered that they were from Michigan on a student exchange program. They had been in DK for six months and hated it. Then their mother appeared and we had a long conversation about how she had flown over to DK in order to take them home.

Two months prior to that, she had met them in Spain on an arranged vacation and had been shocked at how much her girls had changed in only four months. They had become dour in their appearance and character. The mother, a smartly dressed lady in her forties continued to speak about the dreadful downturn in the girls demeanour and appearance. They themselves spoke of how right from the very beginning of their stay in DK, pressure had been placed upon them to conform, in all ways. This pressure came from teachers and fellow pupils alike, and was they said targeted at their appearance and attitude. The mother had been to an interview with the Danish school governors and had made them very aware at how appalled she was at the treatment her daughters had received and that she intended to take the matter further. She commented on how stoic the `board` members were and how they failed to even respond to her complaints.

This story perfectly illustrates what the Danes term as the `Jantelav` (pronounced `Yantelow) or `Law of Yante`. This is an unwritten code of conduct which totally permeates every aspect of Danish life, and has it's roots in a virulent form of Lutheranism, mixed in with Marxist Socialism. This is another means by which control is placed on the population, which being so indoctrinated by this poisonous dogma, then saves the state some money by regulating the thing themselves. It's tenets are basically this :

Don't think that you are special. Don't think anybody or anything you have or care about is anything special.

Don't stand out in a crowd or in any way attract attention to yourself.

Conformity in all things is a requirement for being left unmolested by officialdom and fellow citizens..

This is the basis of a dour and joyless doctrine which is understood and followed by all Danes and taints the whole Danish experience. Without actually experiencing it's toxic effect, it cannot be truly appreciated for the dreadful evil that it is.

Anyhow, she was very happy to be taking her girls back home and insisted that she would never travel to this side of the Atlantic ever again, and her daughters concurred.

My own daughter had a taste of it back in 2000, when she came to visit me here for a vacation, hopefully intended to bridge some of our problems. She was confronted with this code from the moment she stepped off the plane from the UK. A lively and headstrong girl, very attractive and open by nature, things did not go well between her and the natives.

She brought with her a suitcase full of pretty clothes and dresses which she would wear out during the evenings when we took her to town, or on visits to family and friends. In place of the admiration she was used to, she received condemning stares and whispered remarks intended to insult, without actually confronting her face to face. I was forced to defend her on several occasions, and the whole issue made her very sad, and for the first time in her life probably, self concious. This is of course what is intended. Keep people down, don't allow them any joy or expression of their selves. Make them conform.

It was not good, and she never returned. I can't say I blame her.

Anyway Henry, have a look and make sure you are not alone when you do. It is a fairly shocking collection indeed. I swear to you that it is totally representative of what you would meet if you were ever unfortunate to find yourself this side of the pond. I should say of course that your wife and you would be very welcome to come and stay, and we would do everything to make your time with us a happy and rewarding one, and this is a sincere offer. But be warned, DK should come with a `health warning`.