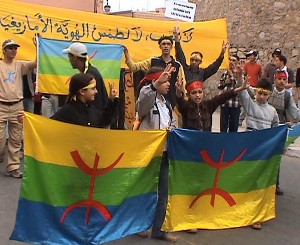 This was followed by a hellish propaganda campaign, backed by European-Zionist media, web based networks,  Human-Rights and NGO's employees-mercenaries, government officials.

Local governments facing public unrest incorporated the new paradigm into new laws and constitutional amendments. They  cool ed and then neutralized all provocateurs by allowing teaching of dialect-Amazighs in schools, opening TV channels, etc... The bubble burst and things calmed down.  Dissent seemed to have been intelligently neutralized.

That is, if we ignore the "eternal conspirator's tenacity for causing ill." The unrepentant revolutionary agent-proxies now upped the ante, demanding regional autonomy, the neocon "Kurdish syndrome", reshaping and "balkanization" of target countries.

Openly supporting Zionism, they alienated most of their own militants, by a 180Â°- turn many didn't expect.

Berber leader M'Henni of Algeria, a useful idiot handled by Mossad, while at a UN's conference on "Rights of minorities", declared himself President of a new "autonomous state of Kabylie", a predominantly Berber-dialect-speaking region.

Previously an unsuccessful folk singer, M'Henni, is now a 'newly reborn Jew' who openly airs views and insults against Islam and Moslems.

A classic example of chicanery and useful idiocy, he is currently in exile avoiding an Algerian-court's warrant for arrest. His son, rallying the "Chosen Ones" says: "I'm longing for Israel's flag flowing over embassy at Algiers". Servants never share their masters' table, so  Rabbis have disowned him and denied his "Holiness".

They said the Berbers were slaves converted to Judaism, and not real Jews ! (Anthropologically and ethnologically true)

Facing Zionist-led sponsoring of unrest, governments play down upheaval stewed by Mossad orchestrated propaganda, while avoiding confrontation and eluding a major Jewish onslaught on the region (of Iran's type).

Conspiracy seems temporarily fading away not finding enough grips on local populations, but let's keep in mind the Zionists are not giving up, standing-by and simmering alternative plans.