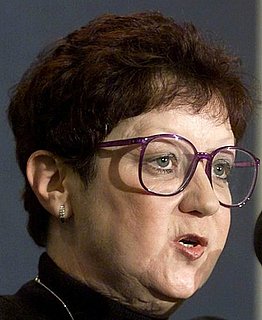 
The teenager whose claimed rape and subsequent lawsuit legalized abortion in the U.S. in 1973 has dramatically transformed with maturity. Ignored by the corporate media, she's now campaigning against abortion and hounding Obama and his minions

In the famous, Roe Vs. Wade case, the plaintiff 'Jane Roe' was given a pseudonym to conceal her real name, Norma McCorvey.

Today, McCorvey, (who gave birth to the baby in question before her case reached the Supreme Court) opposes abortion. She heads her own pro-life ministry called Roe No More.

Turns out McCorvey was a rural Texas girl that had been sexually abused by a relative as a teenager, and married young to get away from that situation but soon was divorced and pregnant at 20.  Friends advised her that she could get an abortion at that time if claimed she was raped.  So she did.  But for lack of a police report confirming that, she was denied an abortion under Texas law which then granted abortion only for cases of rape and incest.

Meanwhile a feminist activist attorney was combing Dallas court records for a girl that fit McCorvey's profile to use for what became the Roe v Wade strategy for legalizing gratuitous abortions in the United States.  The lawyer was Sarah Weddington and the rest is history.

After the circus McCorvey fell into depression, she wrote in her '94 book of being drunk and suicidal when she was caught shoplifitng by the manager of a convenience store who turned out to be a lesbian that took McCorvey in.  McCorvey 'came out' as a lesbian in 1989, and I Am Roe was published and promoted in '94 to spin her as a sort of lesbian Ulysses.  She was still being used by hidden hands of the feminist agenda.

But things took another direction on the book signing tour. A former tavern owner, converted Methodist minister and pro-life activist befriended her at a book signing and showed her an ultrasound of a 10 week old baby in the womb.  Within a year Norma converted from lesbian paganism to Christianity in 1995. In 1998 she became confirmed in the Catholic Church.
In her book. Won By Love,  She wrote,

I was sitting in O.R.'s offices when I noticed a fetal development poster. The progression was so obvious, the eyes were so sweet. It hurt my heart, just looking at them. I ran outside and finally, it dawned on me. 'Norma,' I said to myself, 'They're right.' I had worked with pregnant women for years. I had been through three pregnancies and deliveries myself. I should have known. Yet something in that poster made me lose my breath. I kept seeing the picture of that tiny, 10-week-old embryo and I said to myself, that's a baby! It's as if blinders just fell off my eyes and I suddenly understood the truth--that's a baby!

I felt crushed under the truth of this realization. I had to face up to the awful reality. Abortion wasn't about 'products of conception.' It wasn't about 'missed periods.' It was about children being killed in their mother's wombs. All those years I was wrong. Signing that affadavit, I was wrong. Working in an abortion clinic, I was wrong. No more of this first trimester, second trimester, third trimester stuff. Abortion-at any point-was wrong. It was so clear. Painfully clear

McCorvey was present with pro-life demonstrators at Obama's controversial speech at Catholic University Notre Dame in May 2009.  In fact she's been hounding Obama and his minions at public events this year but the MSM hasn't reported it.

Norma McCorvey was arrested at Sotomayor's hearing July13 after she began screaming that Sotomayor was wrong about abortion.

The point of the article isn't Norma McCorvey's becoming a Christian. That's tertiary. (Catholics are Christians too, by the way). The woman was used and exploited attorneys mandated to locate a poor traumatized and confused pregnant girl with no family to use for the abortion agenda.
If they'd not found Norma they'd have used the next case they found on the Dallas court docket files and the Supreme Court Case would still have been Roe v Wade. Think about this.

"Poor, pregnant, and desperate, Norma McCorvey fell into the hands of two young and ambitious lawyers. They were looking for a plaintiff with whom they could challenge the Texas state law prohibiting abortion, and Norma signed on. Little did she know that her signature would one day make her an international figure.

Though she was touted as a symbol of everything women could gain by being free to choose an abortion, the real Jane Roe was an embarrassment to the image that the Ivy League feminists tried so hard to project. Norma was uneducated, unskilled, a drug user, and an alcoholic. She became a helpless pawn in a powerful game."

I would like to add something I should have included earlier: Norma didn't have an abortion and has never had an abortion. She wrote, "Quite understandably, I had difficulty relating to children. I had given birth to three, all of whom had been placed for adoption (one of them against my will). And because I worked in an abortion clinic, I was fearful of bonding with anyone so young. It was part of my denial. When you know what is happening to the children behind closed doors, it's difficult to become attached to them outside."

You can imagine she gets tons of hate mail from feminists every week. She's got guts for asserting who she is publicly and not going back into hiding.

If anyone is confused over the mental and emotional progression of Norma McCorvey it is this "Hugh" person [below], who sounds from the beginning as a Catholic hater.

Interesting. Especially when one understands that one of the two lawful reasons for abortion in Texas at the time of Roe v. Wade was incest.

How many English speaking people (which, more often than not, means Protestant or protester against The Church) are aware that Henry VIII, who couldn't be denied a much younger second wife, even if it meant destroying the religion of all Europe and beyond - which destruction he effectively put into motion as the first "pope" of his breakaway Church of England - was also the father of that second wife, Anne Boleyn?

The product of this unlawful if not unnatural joining, of course, was one of the world's most vicious, criminal, heartless harlots ever, the "virgin" "good Queen Bess" - Elizabeth, responsible for untold numbers of unjust murders, just as was her also lustful father/grandfather.

Anyone care to go deeper into real historical confusion? An honest study of the origins of Protestantism would satisfy any such appetite.

McCorvey is now a Catholic? Could this woman be any more confused?
She has a famous court case in her fake name, and now she all of a sudden she runs a "pro life" ministry and wants to ban abortions?

I am sick and tired of these "has-beens" and their ilk coming out and recognizing their mistakes decades later for some obvious
publicity reasons. It's about the culture of victimhood mentality and their ability to sell their books and other crap once a spin
doctor gets hold of their story and convinces them of selling it.

Thankfully they are all like a "fart in the wind"... the smell lasts only briefly before it is blown away by the next new topic on
Oprah.

Can somebody please shut off the lights once the last thinking human leaves the building...