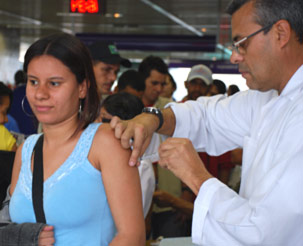 I am a Brazilian doctor who is suffering the consequences of whistle blowing on the Brazilian government and its heinous health policies.

The Chatham House Prize 2009 that Lula received was sponsored by a pharmaceutical company called GSK. Brazilian tax-payers bought this ignominious prize for Lula by taking  40,000 venomous shots of H1N1 vaccine costing US $200M.

The ID Biomedical Corporation of Quebec, itself,  proclaims:

"There have been no controlled trials demonstrating a decrease in influenza disease after vaccination with FLULAVAL [see clinical studies (14)]". ( www.fda.gov/downloads/.../Vaccines/.../UCM190377.pdf).

Year by year, an expensive, unnecessary and criminal vaccine campaign is inflicted on the Brazilian population. Timerosal is given to children at 2 th month, 4th month, 6 th month, before 1 year, and again before the 4 th year.

These result in a variety of diseases: SNC - autism spectrum disease, ADDH, dyslexia, epilepsy, mental retardation by encephalitis, and other vaccine sequels. They are ignored by doctors, pediatricians, neurologists, psychologists, nurses, teachers.

All those cases are misdiagnosed and evident symptoms and signals are ignored. Thimerosal (mercury in 46%) is totally liberated in any Brazilian vaccine. Glutamic acid, formaldeid, alluminium, squalen, don't receive attention by the doctors. They don't know the  University of Calgary Faculty of Medicine study about the mercurial degeneration of the SNC cells. Mercury is venomous in any quantity; it is incompatible with life. See

Our government has a huge conflict of interest with WHO, Rockfeller's UNFPA (United Nations Population Funds), and GAVI (Global Alliance for Vaccines and Immunization). All of them are sterilization and de-population programmers. Nowadays Brazilians authorities prefer the European Illuminati branch, over interests from Turkey, Russia, China.

The WHO, and Health Pan-American Organization have an equal interest with big pharma, richer year over year. A three member coalition was formed: corrupts governments, big pharma, and health organizations. God blesses us all. Our expenditure,for example, with the big pharma reached US$ 1,000,000,000 since last year, just in the H1N1 case and propaganda materials alone. Many people enriched in Brazil and in Sanofi Pasteur. Brazil loves to negotiate with the Frenchs Rafale$ and Frenchs vaccine$.

In Brazil sterilization programs begun in the 90's with the leftists Fernando Henrique Cardoso and his Health Secretary José Serra, the latter an "opposition" candidate for the next election.

"The Day After pills" are common. Homosexuality today is preached in schools; abortion campaigns are the most prefer issue of Lula govern and his Partido dos Trabalhadores; premature teaching of sexuality since 6 years old in TV, schools in mass media and general culture, are the rule, no exception.

Our present Health Secretary, José Temporão, only thinks of sex. He recently recommended  on network TV five sexual intercourse a week! "It's good for blood pressure"! He seems to be a sex-pathological individual. Condoms and rubber penis are distributed in schools for "educational" proposes.

Soon it will be condoms machines at reach of any children at schools! I'm not kidding! Mr. Temporão also is a rabid defender of the drugs harm reduction politic, a program to increase popularity of illegal drugs.

Well, Mr. Evo (cocaine) Morales thanks him effusively! Our Health Minister displayed in 2007 his Manual of Harm Reduction in a gay parade: how to sniff or snort cocaine; where are the needle optimal points; to avoid cash money to sniffing, etc, etc. With that disposition is easy to comprehend our situation. A victory for cocainecracy! This man commands our vaccination programs.

Nobody wants to work anymore.  In northern Brazil, the deep born country of redneck Lula nobody works. Votes for? Ah, too much votes for Lula and her successor! By the way, Comrade Dilma Roussef participated of the U.S. Army Captain Charles Chandler murdering in October, 1968, in São Paulo.

She also was a robber bank to fund communist guerrilla in the 60', or as she said proudly to my democratic project.

The situation is getting worse. We Brazilians have the highest criminality and murder rate of the world. Since 1984, year of our "democratization", to 2004 (source: Justice Secretary),  600,000 people  died by violent deaths, shoot-outs between drug  gangs, personal assaults, homicides. Most of the  victims were 18-32 years old. Annually, we have 56,000 homicides.

The USA had 56,000 casualties in a ten years war in Vietnam. We are at war against ourselves! This is democracy, Communist democracy. Later or soon, we will experience the consequences of the criminal vaccine programs...

The sum of murders, by diseases or drug wars, civilian battles, more a big degeneration of our youngsters; the absence of religion, of God, communist churches, MST (communist rural guerrilla), corrupt politicians, FARC conubio, and we have the entire picture of real Brazil. We became the paradise of the criminal refugees of the world. Our boundaries are open to all. We have lots of illiterate in schools. They get diplomas, certificates, degrees. Notwithstanding, are illiterate, like our lazy and illiterate president. Brazil became the face of Lula.

I don't want be a pessimist. But what can I do if not tell the true?

Comments for "Slow Death: Brazilian MD Speaks Out On Vaccines "

The vaccination campaign has NOT reached its objectives, even though millions have been inoculated. It seems the internet is making some difference, since lots of people received emails and read in forums that the vaccine is dangerous. For the first time in my life, I have seen the government and the W.H.O. doing serious efforts to deny an information de-programming campaign spread by truth-seekers in the web.

This is very good news. Five years ago, NOBODY knew what the new world order was in Brazil. Since that time, many people have translated videos in youtube, started forums and email chains in Portuguese. The outrageous actions of Lula may have helped to wake people up.

One can easily see that almost every government campaign since the left took the power in Brazil has been led by international ONGs funded by Foundations such as Rockefeller, Ford, McArthur, etc. They walk hand in hand with the Marxists. It is so easy to check this out: one just have to google any leftist or social engineering study or program to find it has been funded by an Illuminati foundation. They are proud of what they are doing, and they don't hide it.

In fact, this recipe, ONGs + Marxism, is the same that has been used in the USA. God knows how much money is waiting in Swiss accounts for Lula and his ministries after they leave the government.

Just take a very quick look at this:

It is an official MacArthur Foundation document with its net of abortionist money recipients in Brazil.

Thank you for the article by the Brazilian doctor. Nevertheless, he is inaccurate on his murder statistics. The actual number of child murders is 800,000 - 1.2 million according to the Brazilian Department of Health, which makes it the leading cause of death in Brazil, as in the USA.
http://en.wikipedia.org/wiki/Abortion_in_Brazil

Child murder is the term that 19th century American feminists used for abortion. When Europe was Christian, child murder was treated as capital murder, with both parents and the abortionist found guilty of the crime of abortion being executed for it. In Spain, such mothers were buried alive. Needless to say, abortion was unheard of in Christian Europe.
See: www.newadvent.org/cathen Abortion

While child murder is still a crime in Brazil, it is obviously not prosecuted.
The heinous crime of abortion is usually committed by doctors. Perhaps that is the reason for the ommission?