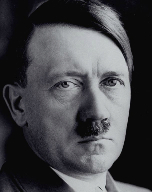 A German Researcher Renounces Hitler as a Cabalist and Traitor

"Hitler's smear campaign was exclusively against Jews, but he had concealed the names of the Zionists who, with greatest brutality and disregard for the Jewish community, had planned the World Revolution and the foundation of the State of Israel. This is striking evidence that he worked together with the Zionists and that he was a first-class liar, hypocrite, and public traitor."

from March 3, 2011
by Dieter Ruggeberg
(for henrymakow.com)


(This is Chapter 1 from the book "Secret Politics-3")

On January 30, 1933, Adolf Hitler became Chancellor of the German Reich. When he assumed power, he was surrounded by four paramount advisers and their financial sponsors.

Behind him was Henry Ford; beside him Hjalmar Schacht and Rabbi Leo Baeck, and ahead of him, Franz von Papen. An interesting picture appears when one takes a closer look at these four advisers.

1. Henry Ford (July 30, 1863 - April 7, 1947) was a Freemason of the Scottish Rite, 33rd degree. In 1919 Ford published a book called "The International Jew". In Germany, "Der International Jude" was soon printed many times. In official history books, Henry Ford is always presented as an antisemite. He was actually the contrary, namely a Zionist agent tasked with bringing anti-Semitism to Germany and Middle Europe. By the exiling of Jews, he was to help create the state of Israel.

Edwin Black writes in "Nazi Nexus"  (page 4) "..., Ford showed friendship to Jewish people - both the Jewish Eastern European immigrant factory workers who he treated with equality and his Jewish friends such as his next-door neighbor, Rabbi Leo M. Franklin, who received a free custom-built automobile each year as a birthday present." 1.

According to Wikipedia, Rabbi Franklin was a member of the "Anti-Defamation League", which in turn is merely an underground organization of the B'nai B'rith Lodge and further of the High Degree Freemasonry.

According to "www.reformation.org": "What most people did not realize was that the Ford Motor Company was a subsidiary of the Rockefeller owned Standard Oil Company." 2.} In the book "Secrets of the Federal Reserve" by Eustace Mullins, I learned that the Rockefeller family was linked closely to the J.P. Morgan and Rothschild families, particularly with regard to the establishment of the Federal Reserve Bank in 1913.

4. Franz von Papen (29 October 1879 - 2 May 1969) was a Knight of the Holy Sepulchre, one of the highest orders of the Vatican. He was assigned to lead the promotion of Hitler in such a way that during the distribution of the powers no disadvantage could occur to the Vatican.

Hitler himself was not only a member of the Thule Order but also a member of a Magic 99-Order. Details of the working methods of this order can be found in Franz Bardon's book "Frabato the Magician". After closer examination of this constellation, it can be stated that Hitler was an agent of Zion, of the Vatican and of the Bank of England (City of London).

The most important supporting evidence is:

1. In 1925 the book "Mein Kampf" by Adolf Hitler was published. Throughout its entire seven hundred plus pages, Jews are condemned wholesale. He writes as if the average Jewish citizen had invented the Protocols of Zion and the World Revolution. This is idiotic because it is not about the Jewish people, rather about very specific Jews. Specifically, it is about those in the secret societies who intended to shape the world, for instance, Karl Marx (Scottish Rite, 33rd degree).

Where are their names? The supposedly greatest Jew hater of all times has nothing to say about Adolphe Cremieux, Theodor Herzl, Parvus-Helphant, Leo Trotzky, Kaganovich, the Warburgs, the Rothschilds, Trebitsch-Lincoln, Bernhard Baruch, Mandell House and Walter Rathenau, just to name a few. That is absolutely ridiculous.

These names simply had to be known to him because they had already been referred to by Ford in his book "The International Jew" and well known to anyone interested in politics. He openly stirs up hatred against Freemasonry which is supposed to serve the Jews, yet secretly he meets foreign High Degree Freemasons to prepare for the takeover of power. The name of the B'nai B'rith Lodge, pertaining to the centre of Freemasonry, is omitted altogether in his book.

That is conscious suppression of the truth and betrayal of both the German and the Jewish people! Hitler's smear campaign was exclusively against Jews, but he had concealed the names of the Zionists who, with greatest brutality and disregard for the Jewish community, had planned the World Revolution and the foundation of the State of Israel. This is striking evidence that he worked together with the Zionists and that he was a first class liar, hypocrite and public traitor.

2. On August 25, 1933, the Ha'avara-agreement between Hitler and the Zionists was concluded. On March 24, 1933 the Zionists declared war on Germany and five months later Hitler signed an agreement with them!

3. On September 10, 1933, a State-Church-agreement, the Reichskonkordat, was concluded between Hitler and the Vatican.

4. On May 3, 1940, the English army was beaten at Dunkirk by the German army. On Hitler's orders, the remaining 330,000 British soldiers are permitted to return to England, but had to promise to come back later and totally destroy Germany. The English army complied. An extremely unique case in man's history.  Please refer at the chapter "Dunkirk and After" in Captain A.H.M. Ramsay's book "The Nameless War".

5. On January 18, 1941, Hitler received an offer of cooperation from the Zionist underground organization N.M.O

(National Military Organization, Irgun Tzwa'i Le'umi) Menachem Begin happened to belong to this group. Hitler accepted the offer and the visible result was the foundation of the Theresienstadt camp in the spring of 1941. H.G. Adler reports extensively on this in his book "Theresienstadt 1941 - 1945".

6. On January 20, 1942, the infamous Wannsee conference took place. Using this conference as their basis, the international press and many history books concluded that "complete extermination of the European Jews" had taken place. An investigation of the document however brings to light quite a different fact. It actually does not contain a single sentence about murdering Jews but merely a section indicating the fact that Hitler's SS (Schutzstaffel) had a plan to build a Jewish elite. Another typical case of truth distortion by the Allies against Germany.

1945: Adolf Hitler escapes to South America. Any historical researcher who does not take into consideration membership in secret societies of the power the elite, i.e. bank managers, politicians and heads of the big companies, is not at all able to discover much more than fifty per cent of the entire truth.

This is a chapter from the book "Secret Politics-3".

Comments for "Adolf Hitler -- Agent of Zionism and Freemasonry"

I keep thinking about your recent post on Hitler, Zionism Freemasonry (HZF). It is fascinating to read! These boys use the same script today that they used 80 years ago with such spectacular success to push all of humanity into another world war then and now. There is just one big difference: today anyone can understand what is going on mainly because of the internet and the huge access to information. When Tunesia happened a while back I was stunned because it just seemed the beginning of some old prophecies going down in real time that say that the Arabs would rise up and unite into this Pan-Arab militant super power that would bring war to all of Europe. Considering the HZF script it is all instigated just as in the 1930s by the same people except this time it will get out of control ay some point and Rome, Paris, and especially London will burn. Before this happens they would have to attack the Vatican and assassinate the pope. That bankrupt America is all but finished ought to be obvious even to the dumbest flag and Bible waving patriots. We are not even a footnote on the grand scale of events that are unfolding. Stay tuned. Thanks for the story. It does confirm and match the prophetic pulse of our times.

Looking at the statement above, a couple things strike me as wrong:

1) "Hitler's smear campaign was exclusively against the Jews" This is not true because Hitler used the term "Jewish-Bolshevik" as one word in the same breath all the time in his speeches. He was very much opposed to communism, which then was referred to as Bolshevism.

2) Another thing Hitler was very opposed to and very outspoken about was freemasonry on every level. That is why he outlawed freemasonry in Germany!

I'm sorry but as an "Agent of Zionism and Freemasonry" he would not have done that.
The author is asking us to do a little too much mental gymnastics here.

I can see why allot of global conspiracy researchers are getting stuck there. They would like Hitler to be a Freemason, to make things easier on themselves. I want to say to them keep up the good work, but you need to dig a little deeper.

The historical evidence suggests that he was fighting the new world order.
If you look at his speeches, of which there are many, he actually sounds like an infomercial guy who does not miss a singular opportunity to name, uncover and speak out against: Jewish-Bolshevist conspiracy and Freemasonic influence.

Sir I know Henry Ford was a 33rd degree Mason and the whole Masonic Temple thing in Detroit MI
Mr Henry Ford was not a Zionist !!! and was manipulated by the powers that be at the time, to keep his dream alive, So please Mr. Makow don't do that to a great American Icon.

I challenged Dieter's view of Ford. [Below]

Mr. Ruggeberg presents a bit of a mixed bag with this one. Despite a number of interesting details, history is presented as an
agglomeration of personalities, where (for example) Henry Ford's motivations for supporting fascism are assumed to be related to freemasonry and Zionism, rather than the obvious economic reasons.

I take great exception to the condemnation of Walter Rathenau, who in Mr. Ruggeberg's view escaped the scorn of Hitler. Rathenau (the
foreign minister before Hitler's seizure of power) was a powerful German nationalist and vocal opponent of Zionism and socialism, who
argued for Jews to assimilate into German culture, and for workers to participate in capitalism, rather than reject it. He negotiated
the Treaty of Rappollo (1922) with the Soviet Union, which established joint industrial and infrastructure projects â€“ for this
he was/is condemned as a jewish commie collaborator. In fact, he should be celebrated as an opponent of the British imperial strategy to divide and conquer Germany and Russia. Remember that before WW1, these nations enjoyed strong bonds with each other and with the United States. What was the result of Rathenau's efforts?
He was assassinated by proto-Nazis. The event was mourned in his time and celebrated by the Nazis.

Mr. Ruggeberg steps on the right path when connecting Hjalmar Schacht to Montagu Norman, and falls back into the comforts of anti-zionism by saying "the Bank of England is under the control of the Rothschild family."

The question should not be "did Hitler hate the right Jews?" but, "what interests did Ford Motors, Standard Oil, JP Morgan Chase, et all have in promoting both Nazism and Zionism?" The answers to this question don't require one to examine the masonic regalia on human footnotes like Franz von Papen.

I disagree with your defense of Rathenau. As you know, he said "300 men all known to each other control Europe." He was one of them. His pact with the Soviet Communists is consistent with the Judeo-Masonic agenda.

I question the statement that the Rockefellers owned/controlled the Ford Motor Co but Ford's capitulation to the "Jews" and his later sup[port of Hitler is definitely a story that remains to be told. I like Ford and like to think he was a dupe rather than a conscious agent of the Zionists. Most Freemasons are dupes.