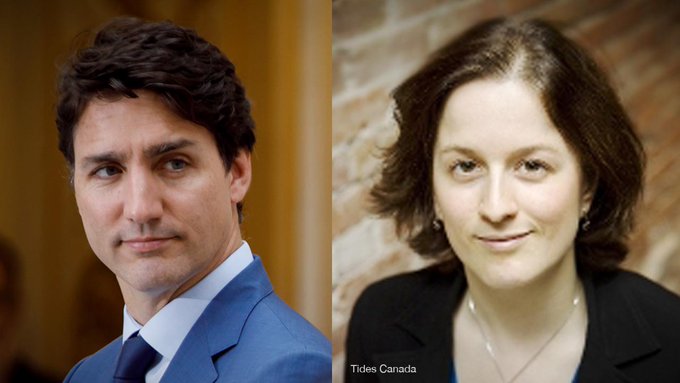 Fidelito and (((Sarah Goodman)))
Wonder why Canada has been impotent in the face of pipeline protests -- railroad blockades and derailments -- that have resulted in the cancellation of two multi billion dollar resource projects? Turns out protesters are funded by corporate America through the Communist "Tides Foundation."
January 2020  ---"Former Tides Canada Vice President Sarah Goodman has just been promoted to Director of Policy in the Prime Minister's office
Goodman has worked in various positions in the Prime Minister's Office since 2017. Her previous experience was as the founder and CEO of Treetop Strategy, and before that, the Senior Vice President of Business Development and Strategy for Tides Canada.
And Goodman isn't the only activist shoehorned into a position of power by Justin Trudeau -- Rebel News has previously reported that Minister of Canadian Heritage Steven Guilbeault's organization Equiterre had received well over $100,000 from the Tides Foundation. Guilbeault, who once worked for Greenpeace, joined the Liberals' Climate Advisory Panel as a "climate leader" co-chair in 2018 before being recruited by the Liberals as a candidate.
In his position as Minister, Guilbeault is responsible for the CBC.
Currently, the Tides Foundation is using their war chest to help fund the anti-GasLink Office of the Wet'suwet'en.
Recently, the CBC published a piece siding with the hereditary Wet'suwet'en chiefs despite the democratic support for the British Columbia pipeline granted by 20 elected First Nations groups in the area."
https://www.rebelnews.com/former-tides-canada-vp-sarah-goodman-new-director-climate-policy-trudeau
from APRIL 1, 2010
By Stephen Baldwin
The Western Center for Journalism

(Abridged and Edited by Henry Makow)

Over the course of its 33 year history, a little known group, operating as "the Tides Foundation" and "the Tides Center"  has given a half billion dollars to anti-free enterprise groups, gun control groups, anti-private property groups, abortion rights groups, homosexual groups, groups engaged in voter fraud, anti-military groups, and organizations that seek to destroy America's constitutional basis. All told, over 100 leftist organizations have received funding from one of the two Tides groups.

Indeed, its financial disclosures show that the Tides Center has raised between $48 and $71 million each year since 1998 [for] far left groups. The closely-aligned Tides Foundation has reported revenues of between $59 and $77 million every year since 2002.  The two tax exempt groups are supposed to be non-partisan, but they are certainly extremely political and they push the envelope regarding what non-profit groups are allowed to do politically.

The list of hard-left causes is long and there is not enough space to review them all.  But here's a brief review of a few of them: 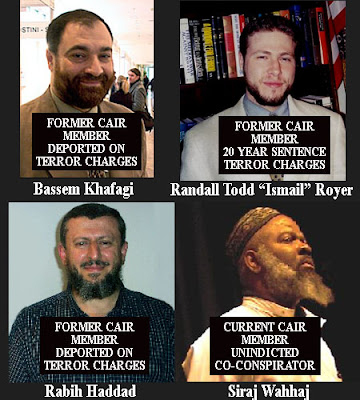 Apparently, the Tides Foundation does not consider any Islamic group to be a threat, even if they have been implicated in terrorist activities by the government.  It has funded the Council for American Islamic Relations (CAIR), probably the leading front group for Islamic radicals in America.  Indeed, three of CAIR's leaders have been arrested for pro-jihadist activities and CAIR spends much of its time attacking American efforts to track, monitor, and arrest domestic terrorists.  They have opposed, for example, virtually every effort by the Department of Homeland Security and the FBI to monitor Islamic radicals known to be engaged in pro-jihadist activity.

But rather than be concerned with Islamic terrorism after 9/11, the Tides Foundation poured half of a million dollars into an effort to protect the rights of homosexual Arabs.  Another Tides recipient, the Democratic Justice Fund, works to east restrictions on Muslim immigration to the United States from countries designated as "terrorist nations."

The Tides groups also funds other groups who work against the creation of internal security measures such as the Arab-American Anti-Discrimination Committee. 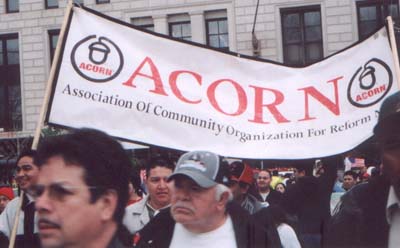 When the story broke last year about how ACORN founder Wade Rathke was caught embezzling a million dollars from ACORN, it was Tides founder Drummond Pike who reimbursed ACORN for the missing money.  Pike did not want an investigation of ACORN that would force it to open its books.  With ongoing investigations in at least a dozen states involving ACORN and voter fraud, you can understand Pike's concern.  Not only that, but Rathke sits on the board of both the Tides Center and Tides Foundation.

Drummond Pike, a scruffy, California-based, anti-war activist, founded the Tides Foundation in 1976 and managed to raise millions of dollars from America's leading foundations.  What he promises them is anonymity since they are able to claim they are simply contributing to a foundation self described as being "committed to a society based on fairness, equal justice and equally shared economic opportunities..."

That sounds fairly innocuous.  The contributors therefore have some "deniability" about how their money is used but Pike then directs this money to a massive network of hard-left groups.  Indeed, Pike even states, "Anonymity is very important to most of the people we work with."

Four of its largest supporters are as follows:

Led by John Kerry's wife, Teresa Heinz Kerry, this group has contributed at least $8.1 million to the Tides entities since 1994.  This is the endowment created by the Heinz food empire which Teresa Heinz still has ownership interest in.

Soros has given more than $7 million to the Tides Foundation.  Tides founder Drummond Pike serves as the treasurer for Soros's Democracy Alliance, a major funder of ACORN.

Ford Foundation. This foundation consistently supports causes Henry Ford would never have supported and has become one of the largest donors to Tides, giving them millions of dollars since 1997. Not only that, but the Ford Motor company also gives to Tides.

Rockefeller Foundation:  They have been funding the left in America for 40 years, so this is no surprise.

Americans need to realize that this is how the hard left in America is now funded. Indeed, this is the same network used by the Obama campaign machine to manipulate public opinion.  This coalition of left wing groups and hijacked foundations will destroy America unless Americans wake up and quit funding the corporations linked to these foundations.

One way to reduce the power of this alliance would be to boycott the products and services these organizations are involved with such as Ford automobiles, Heinz food products, Bank of America, Kellogg cereals, HP computers, etc. While these foundations usually no longer have any financial association with the corporations that originally endowed them, you can be sure the people from both entities still travel in the same circles. If thousands of Americans, for example, told Ford dealers they will no longer buy Ford cars as long as the Ford Foundation funds anti-American causes, the Foundation will quickly get the message.  If thousands of Americans wrote the Hewlett Packard Company and informed them they will cease to purchase HP computer products as long as its foundation funds the left, you can be sure HP will pressure its foundation to back off its agenda.

The Ruckus Society is a group of environmental anarchists dedicated to the violent overthrow of America. One of its projects is to train people to disrupt events such as political party conventions using street blockades and other violent techniques. Its director has publicly stated that, "you can use vandalism strategically." They received $200,000 from the Tides Foundation.

Stephen Baldwin's article is nothing short of gross defamation of Islam, especially CAIR. He is aggrieved that CAIR refuses to co-operate with Homeland Security? Duh! well go figure idiot, CAIR has been systematically targeted by the zionists becuase of its stance and defence of muslims in America since 911.

I am personally offended by the inclusion of Siraj Wahaj as 'Unindicted co-conspirator'-of what???? To blow up the white house??? I have met Siraj and listened to many of his lectures. He is a man of true compassion and love for muslims and for justice around the world. I do not know the others but I am sure they were all stitched up by the FBI and co, no doubt. I suppose Stephen is relieved that the super terrorist Dr Aafia Siddiqui is behind bars-now Americans can sleep safely at night. Show me the evidence that these muslims were involved in any terrorist activities otherwise shut the f**k up. Just another piece of zionist drivel with nowt credibility as usual.