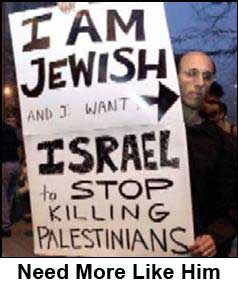 "The Jewish elite, the academics, politicians and media consider themselves to be great moralists, with very little self-introspection. Their self-righteousness, arrogance, and inherited Jewish prejudices against Christians has led to a huge amount of anti-Christian sentiment."

In Canada, this is called "hate speech" and would draw  "human rights" complaints from organized Jewry. In fact, this statement was made by an Israeli Jew to the Jerusalem Post, (March 30) and referred to anti-Semitism in Norway. I changed "Norwegian" and "Lutheran" to "Jewish," and "Israel" and "Jews" to "Christians."

Manfred Gerstenfeld, Chairman of the Jerusalem Center of Public Affairs was commenting on the "latent anti-Semitic feelings in Norwegian society" released by Operation Cast Lead. This shows that Zionists claim carte blanche when it comes to ethnic generalizations about others but cry "anti-Semitism" to silence criticism of themselves.

Rabbi Yoav Melchior, the leading rabbi of Norway, echoed this view that the Norwegian outrage at the Israeli massacre of Gazans was the result of latent anti-Semitism. (I cite the article extensively since it has been removed from the JPost site.)

The rabbi said he had been "very scared during the war. Hatred spread in a fast, dangerous way. This was blind emotionalism against Israel and against Jews. It gets deep at the heart of Norway's emotional anti-Semitism. The current wave of anti-Semitism shows what people have been holding inside them," he said.

Gerstenfeld, who authored and recently published "Behind the Humanitarian Mask: The Nordic Countries, Israel, and the Jews," noted that "considering that there are only 700 Jews in a population of 4.6 million, there is a lot of hatred against Israel and the Jews."

Norway's government has been vocal in its criticism of Israel in recent months. At the outbreak of the Gaza hostilities, Foreign Minister Jonas Gahr Støre declared that "Norway strongly
condemns any form of warfare that causes severe civilian suffering, and calls on Israel to withdraw its forces immediately."

According to Gerstenfeld, "because Norway is a very tiny country with a language most don't understand, nobody gives them much attention. Their anti-Semitism flew completely under the radar for a long time." Now that the world is becoming aware of the situation in Norway, "the Norwegian elite won't get away with this incredible arrogance any longer," he asserted.

This article illustrates two disturbing characteristics found in the Zionist (and perhaps Jewish) psyche which may be a form of mind control.

1) Zionists never say sorry because they are never wrong. They have suspended the law of cause and effect. Criticism, opposition or anti-Semitism is never the result of their own actions or behavior.  It is always due to an irrational inbred hatred or prejudice on the part of others. Anti-Semitism gives them infallibility and immunity.

But as long as Jews support Israel, they will be held responsible for Israel's actions. Zionism is all about creating anti-Semitism to force Jews to back their aggressive hidden agenda. (See my "The Zionist Protection Racket") Jews are being used to build the Rothschild's Thousand Year Kingdom, and when they are no longer needed by the Illuminati, they will be tossed aside.

Zionists demonize and treat their opponents like subhumans and "haters" because they won't admit their wrongdoing. This idea is bred into them so their leadership literally can get away with murder. Thus while some righteous Israeli soldiers reported numerous war crimes in Gaza, the IDF  blithely concluded that these reports were "hearsay." This trimming of the truth to fit the agenda has become commonplace in the world today.

2) Gerstenfeld's threat that "the world is becoming aware of the situation in Norway" and the Norwegian elite "won't get away with it any longer" reveals an authoritarian tendency.
Zionists, like Communists, do not respond to criticism with rebuttals because they know they're wrong. After marginalizing critics, they respond with ad hominem attacks, ridicule, smears, threats, legal actions, and attacks on their livelihood.  Disingenuously, they cry "hatred" when in fact they are a major source of hatred in the world today. They are a big part of the dynamic of the emerging totalitarian world government.

In the West (the US, Canada, Australia, the UK, Germany and France) this totalitarian system is synonymous with support for Zionism. Criticism of Israel is being banned. In the UK, a diplomat faces jail for expressing disgust at Israeli atrocities. British MP George Galloway is refused entry to Canada because of his support for Palestinians. Canadians were never given an opportunity to debate this "security agreement" whereby critics of Israel, a country built on terrorism, are suddenly accused of supporting terrorism.

The way Zionists and Communists work, the way the New World Order works, is to control people by controlling thought and discourse. Read "The Protocols of the Elders of Zion" over and over. Don't overlook the blueprint of the New World Order.

Organized Jewry has noted an increase in anti-Semitism.  This is due to two factors: Israel's  reaction to Lebanon in 2006 and Gaza in 2008: wildly disproportionate to the provocation, unequal in strength, and savagely targeting civilians. And more important, the perception that "Jews" are behind the current credit crisis.

"Alan Greenspan is a liar. The Federal Reserve and its long standing partner, the US Treasury, engineered the housing bubble, including the fraudulent inducement of America as part of a financial coup d'etat. Our bankruptcy was not an accident. It was engineered at the highest levels."

The cause of anti-Semitism is no mystery. Too many Jews have served as dupes and pawns of the world's central banking cartel's (i.e. Rothschild's) plan for world government tyranny. Masons, Mormons, Jehovah Witnesses, Republicrats and practically every other "successful" religion or organization also serve. (Anyone who espouses diversity, "women's & gay rights", climate change etc.) But if history is an indication, popular indignation will be funneled against those Jews who played little or no role in this diabolical conspiracy. These Jews must stand up now and, in the words of Sam Goldwyn say, "include me out."

All patriots must speak up and oppose the New World Order in many different ways. Let's use our freedom or risk losing it.

The Silence of Diaspora Jews

Note: Help spread the word! I am offering my book "Illuminati" at an inexpensive "not for resale" volume price to give as gifts to friends, local leaders and politicians. Inquire at [email protected]

our article was so right on! I grew up with, and love so many good Jews. I feel very connected to Jews and have all my life. Born in England and raised in Minnesota; my religious exposure has been to Lutheranism and The Church of England. My mother's family sheltered Polish Jews during World War II. My family raised me to respect Jews and favour them. Although considered to be a Gentile, part of my soul is Jewish. Therefore, I want to say, I truly hope and pray that all the good Jews wake up and declare themselves "OUT" from being collectively recognized or associated with the Zionists in any way, shape or form.

I don't want good Jews to be persecuted for the crimes of the hidden ones.( Or not so hidden lately). Because, it's really not about being Jewish, or a woman, or black or any of that. We must stand together. Now is the time. No more separation. I pray that we can all see past the labels and facades that parade in front of us and truly see what the substance of the matter is.

No more fighting people. Anywhere. At any time. For any reason.

I'm probably not the first, but I wanted to bring something to your attention.

I'm a daily reader of the news at rense.com. I recently logged onto rense.com at my local library in Cody, Wyoming and clicked on one of your articles linked there only to get an odd error message censoring your site. I was appalled. I don't recall the exact wording on the warning but I do remember two words which were "intolerance and hate". It said something to the effect that the website I was attempting to view was unavailable due to its content which promoted intolerance and hate. I sat there dumbfounded.
Is this America or communist China? This was the first and only time I had ever seen any form of censorship while viewing any website at my local library. The Rense site pops right up, but any of your articles linked are censored. I've seen other sites that I think are a lot more intolerant than yours so I wonder how and why your site wound up on some "list". Who is the judge and jury here? The ADL? The JDL? This is an outrage. To think someone out there can pick and choose what I, an adult American, can view online disturbs me greatly, especially when it's clearly non pornographic and simply political in nature. Ironically, I bet I can access any communist website I want through thr library!

It was right at closing time at the library so I had to log off the computer and leave but the next time I go down there I will investigate the situation and ask the librarians what the story is. Is the censorship within the Cody library only? I'm not sure. It could be state wide for all I know.

This is both an affront to me and I'm sure to you as well. I hope something can be done to change it.