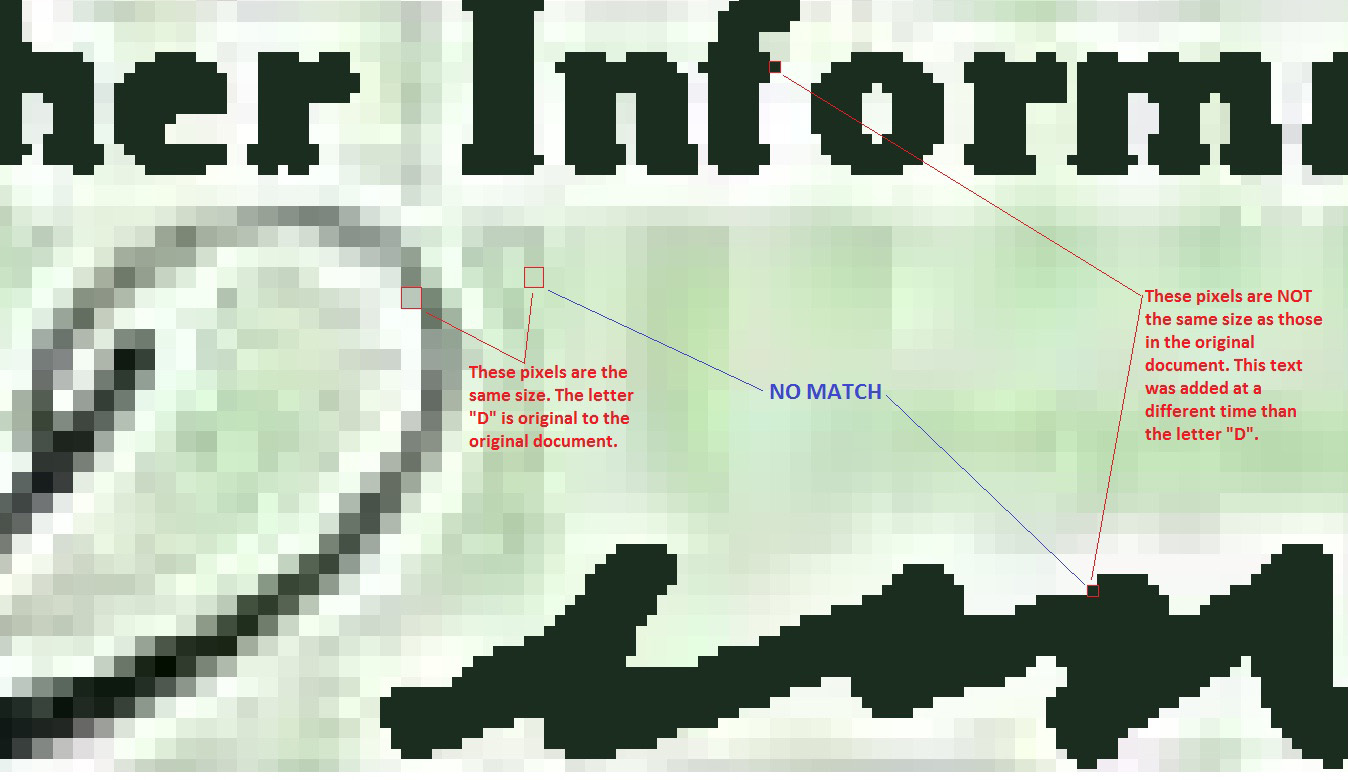 by J. Becker
(for henrymakow.com)

A very simple review of Barack Obama's long form birth certificate, which was released on the whitehouse.gov website on 04/27/2011, indicates that the document was altered. Anyone can review this finding, and I urge them to do so. 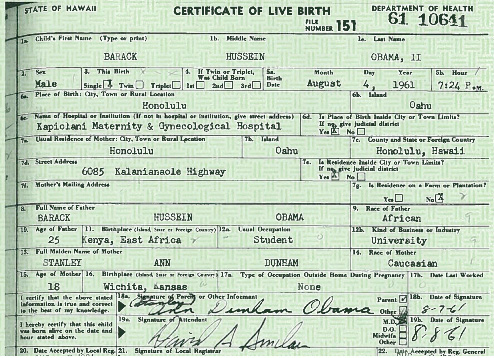 Now, look at the pixels in the text "Signature of Parent or Other Informant" - just above the letter "D" as well as the letters in the remaining portion of the signed word "Dunham" - in this case look at the pixels in "unham" (Dunham less the "D"). Those appear to be the same size too, correct? Now ask yourself this. Why doesn't the size of the pixels in those words match the pixels in the letter "D" and the background text? You should be aware that scanners do not randomly generate various size pixels on a document. A scanned document will show all the text in the same layer, with the same pixel size. This document is purported to be scanned in, yet the varying size of the pixels seem to tell a different story. As you review other sections of this document, you'll find this inconsistency repeats itself many times over. In fact, it's easier to find text that doesn't match the original than does.

How did this occur then? I believe an original birth certificate document was scanned to an electronic file. I believe the file was then opened in software such as Adobe Photoshop, or one of numerous other editing applications. Text in the original document was selectively removed and replaced new text. Once the alterations were complete, the document was converted to a pdf document directly from the editing software, creating and locking in two separate pixel sizes.

As you'll see below, I've chosen only two pixels of each size to compare the two different sizes. As you'll see, by looking around the document, this is not an anomaly restricted to the four pixels that I've selected. This discrepancy exists all over the document. You be the judge, but please don't be fooled by this document. This birth certificate has clearly been altered.

"this new item is meant to be a psyop--a Left-Right detonation to throw the two camps against one another".

No, it is meant as a test to determine how high a percentage of the Amerikan sheeple will "buy it".
If that is high enough, then they know it is safe to proceed with the next phase of the agenda.

One little birth certificate glitch no one seems to have caught on about is the type set. The "ni" letters of the hospital name gives away another clue to this document fraud.

In the old days before modern computers there was truly mono-space type as this was all the typewriter could technically perform. The "n" key and "i" key were always equal distant. With the modern PC even spacing of not only words but letters came into being so that fully justified left and right margins were possible.

Most people probably don't understand the cut and paste of signature pixels you're showing but thought I'd pass along the reasoning.

Download the pdf from the white house site. Open in Adobe Illustrator. Ungroup the layers and you will be amazed . . .

On the new COLB for Obama.

We have been discussing this in my cirlcle of analysts and researchers as well.

We are coming to the conclusion that givin the fact that the regime has access to some of the best document forgers on the planet, that
this new item is meant to be a psyop--a Left-Right detonation to throw the two camps against one another.

As the author of your recent article remarks, he could have done a more convincing job. I could have as well, being well versed in Photoshop and Illustrator.

I am convinced that this document was purposefully presented to be torn apart by those interested in the truth, splitting the population
apart between the 'true believers' and those who can still think on their own.

A lot of flame and furry is being expended over this issue right at the perfect time, the beginning of the 2012 campaign cycle.

The powers that be don't want the issue settled--they want the frictions and distractions to continue on into the campaign.

DIVIDE AND CONQUER is the name of the game.

I am an observer rather than a player on this. However I have been involved in document publication from the old rub on lettering of four decades ago through to modern digital imaging. In fact I purchased the third Apple Laser printer system sold in Ireland and I have some experience and expertise in electronic digital reproduction of copy masters for both conventional printing and reproduction digital imaging. In addition I worked regularly and closely for a decade until earlier this year with a PI on investigating and assessing forged or otherwise altered, printed or duplicated material.

At this stage I have been following the arguments regarding the technical composition of the document rather than the contents and it would seem that some of the anomalies highlighted so far cannot have accidently arisen and do point to a composite document rather than a true copy of the original. On the balance of probability this is deliberate, as given the resources available to the White House and 'insider' establishment, such a document could have been produced that would have been a faithful copy of the original with undetectable deletions, additions or alterations, perfect to the last pixel.

Why then the intentional discrepancies ? It is early days yet and far from going meekly to his basket if this was what the White House intended, this particular puppy have quite a distance to run and will do so for a long while yet!

I tried exactly what the author Jim Becker said to do and he is 100% right. Many moons ago I was a graphic artist.

The background and some of the text are of one and the same size pixels and most of the other text is of another size pixels and it entirely black with no shading. Very strange. I magnified the government pdf image 2400%. Among the anomalies are:

* Underneath 'Department of Health' are the numbers '61 10641'. Only the last number '1' is the same pixel size as the background image.

* Under 'Full Maiden Name of Mother' is written the name 'STANLEY'. Only the letter 'S' has the same size pixels as the background image. The rest of the letters don't 'TANLEY' and they are totally filled in black with no shading.

This is a poor forgery by the United States government but they have accomplished what they initially out to do. On the radio driving to work yesterday I heard on the news about how Obama's Hawaii birth certificate was produced proving that he was 'Born in the USA'. Right from the "horses mouth" the lying controlled press.

As there are millions more "sheep" out there than there are "conspiracy facts readers/researchers" the 'plantation masters' don't care if a few people catch on as long as the "sheep" (the majority of the populace) are fed the lie.

Just to prove to myself that Jim Becker is correct in saying that "A scanner will not pixelate what it picks up at different scale"
I have many pdf files on my computer lying around. I picked one file in particular. It was a concert ticket that I scanned on my
BROTHER copier, scanner, printer. The concert got cancelled and I mailed the concert tickets to get my money back and I scanned the tickets for a copy for myself. The concert ticket I scanned had a colour background (like the Obama-nation
alleged birth certificate) with text over it. I magnified the concert ticket (pdf file) 3200% and all the text (in blue and black) and
the background was the same pixel size, everything ! All the text at that magnification had shading unlike the Obama file.

Open up a picture on your computer from a digital camera picture and magnify it the most you can. All the pixels are the same size.

Here is where I'm absolutely baffled by this document. The error is so glaring, so obvious, so easy to discover, why would they release something like this? I would imagine he could have a best-in-class document expert / Photoshop expert create a very convincing birth certificate.

In fact, I actually anticipated that a release of a long-form birth certificate would occur one day. I did not anticipate it being such a poor facsimile though. Why? Is the discussion of validity of his birth, or accuracy of the purported information so taboo within the Whitehouse, that he couldn't or doesn't discuss this with people within his circle? Did this fact force him to look outside his resources, perhaps to the staff at the courthouse where the document was kept, and they assured him that they could create a convincing document? I honestly believe Obama to be crafty, and surely manipulated, but I don't think he is of above average intelligence. A good orator with a convincing script can fool people into believing so. Did he believe that the person that made the obvious adulterations was likely an expert enough to create a convincing document? OR, letting my conspiratorial mind take over, is this error by design, to further the appearance of craziness in individuals such as me. This release clearly has caused more division between the believers and the non-believers of Obama's authenticity.

The MSM is all over this, gleefully rubbing it in the so-called birthers (I dislike that term) faces. Meanwhile, those unconvinced are doubling our efforts to prove this falsehood. If this is the case -- GENIUS! As you are quite aware, the globalists know no bounds in their efforts to destroy the fabric of humanity for their own designs.

One other thing about this document. It was edited in very strange places. Weird layers were created in odd locations. Imagine, again, rebuilding a house, and breaking it down to just a few remaining 2x4's and a bit of roofing material and building a new house around it. This is analogous to what was done with this document. If I were an expert at this, I would have started with a clean slate, carefully recreating identical elements of an original document, into a new document to end with one single unifying peace. Back to my theory of being intentional - did they purposely leave false crumbs to find? New theory, did the editor of the document want this to be found and purposely create a product that would be obviously faked?

This is a very odd document Henry.