Bluebeam Hoax is a Real Danger 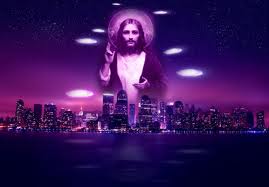 "Whilst Revelation speaks about The New Millennium, The Coming of Christ, The Elect, and even describes in detail The Spaceship; Project Bluebeam attempts to mimic the truth with fantastic lies and delusions that run parallel to the truth, but are not the Truth."

My concern about Project Bluebeam was heightened when I witnessed a projected hologram in the sky. (See Note below)

Who but the most foolhardy would deny that the next phase of WW3 is imminent which will make all the wars up until this point in time seem like practice.

To the Evil Elite that enslaves us, exposing their agenda using the drip, drip method is a critical part of their plans until the people are soaked in blood.

People are referred to as sheeple (which is a very derogatory term), goyim, cattle or useless eaters, etc. And what people are to T.H.E.M. is a sacrifice to their master who is the devil.  T.H.E.M. = The Hierarchy Enslaving Mankind.

Project Bluebeam relates directly to the coming of the anti-christ and the surrounding crisis and tumult planned to occur which includes the lie: The Rapture.

Christians believe in being raptured, though there exists no biblical proof other than some church's interpretation. It is known that Satanists have infiltrated churches.  It is a lie Project Bluebeam is based upon:- the coming of a saviour (their lying saviour who is anything but a saviour) to bring people into the 'new millennium'.

Whilst Revelation speaks about The New Millennium, The Coming of Christ, The Elect, and even describes in detail The Spaceship; Project Bluebeam attempts to mimic the truth with fantastic lies and delusions that run parallel to the truth, but is not the Truth.

At the same time, mankind is faced with demonic forces which mess with people's minds, so that, a large number of people exist in confusion holding their heads in despair. Such may be the deciding line for True Hope or the false hope, and you can bet the evil Elite are planning something parallel to the 'True Event' with their 'it looks real, but is not real' magic tricks of delusion and lies.

Which brings me to my concern about Project Bluebeam because a projected hologram in the sky may 'look real'. What else would a person think upon seeing an image spanning a large portion of the sky, whilst unaware of a technology to trick the public on such a large scale as the Project Bluebeam is reported to be?

The truth movement talks about other people not being awake, but the truth movement is in different stages of wakefulness and vulnerable to Satan's deceitfulness. If a person cannot distinguish between good and evil, then how can they expect to be allowed into The New Millennium and The Kingdom of God (with Christ).

The link above goes into more detail about Project Bluebeam than I ever could. I will proceed with personal concerns, and hope people will awaken to its plan.
--
Debra Siddons, a British activist, can be reached at
[email protected]

Comments for "Bluebeam Hoax is a Real Danger"

The article about Project Bluebeam (what a strange thing!) says:

Christians believe in being raptured, though there exists no biblical proof other than some church's interpretation. It is known that Satanists have infiltrated churches.

It is the wicked, the violent, who will be removed from the earth - at Armageddon. Didn't Jesus confirm this when he said that "the meek" (those who are meek towards their Creator) will inherit the earth.

Certainly something has gone terribly wrong with the churches and their teaching. But isn't that why the door to door witness work is so important? People urgently need to know what the Bible on their shelf actually says.

How are they going to know unless they are told?

Not to be nit-picky, but Debra Siddons states: "Christians believe in being raptured, though there exists no biblical proof other than some church's interpretation."