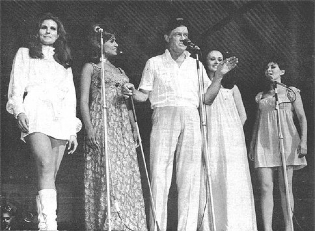 The disparity between Bob Hope's public persona as entertainer of US troops,
and the sordid reality causes cognitive dissonance.
Many entertainers are products of MK-Ultra
mind control and prostitution. This article
describes the early days of a system which
is pervasive in the entertainment industry today.
People like Bob Hope were pimps, pedophiles & programmers.

"The bimbos that Hollywood has foisted on us as "stars" are largely mind-controlled playthings of the elite."

The bimbos that Hollywood has foisted on us as "stars" are largely mind-controlled playthings of the elite. 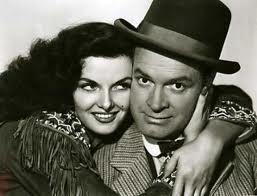 When you look back at the sexed up mannequins that Bob Hope toured with, it makes perfect sense. Marilyn Monroe, Doris Day, Jane Russell,(left) Ginger Rogers, Barbara Eden, were all stamped out by the same mold. Then later on Monarch subjects like Brooke Shields, Jessica Simpson and Carmen Electra joined the squad. It's mind-bogglingly obvious when you stand back to look at it, knowing even they don't know.

What's especially unique is that the USO is NOT part of the government. This allows this sinister organization to freely operate under the aegis of U.S. Military-Hollywood-Political apparatus. Very clever. And it has had a free hand on transferring mind control assets for years.

"This gave him perfect cover to shuttle Monarch Slaves from base to base, nation to nation, under full military escort with little or no interference from domestic or foreign press, since all U.S.O. activity is under aegis of National Security Agency (NSA) & Dept. of Defense (DOD). Far beyond an Ambassador, Bob Hope operated above State Department levels, having direct access to the Dir. of CIA (DCI), Pentagon, White House & POTUS" 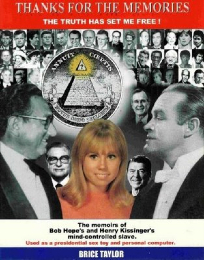 Brave victims like Brice Taylor (who Hope personally controlled), Cathy O'Brien and others have exposed the abuse and mind control.

In her book "Thanks for the Memories," Brice writes,  "What most of you have not been allowed to know is that years ago, at the outset of the Cold War, permission was given to a hidden group of so-called 'professionals and leaders' to experiment on the unsuspecting American populace in an effort to further a variety of advanced technology."
"The technology gleaned by the American leaders, medical professionals and scientists was in the form of bio-electromagnetic frequency medicine, genetic engineering, mind control, brain research, near-death experimentation, paranormal/psychic experimentation, remote viewing, time and space travel and other advanced research that make our everyday human understanding look antiquated."
Fritz Springmeier elaborates on Bob Hope's role: "There have been numerous connections in this author's research about the Illuminati/CIA mind control which connects back to the U.S.O. (the American military entertainers that traveled in USO units on tours.) The story about how the USO was used to carry messages to mind-controlled agents and military men would include many names...The military apparently was already using programmed killers to carry out deadly assignments...Bob Hope & the USO was used to carry trigger words to these mind-controlled people." 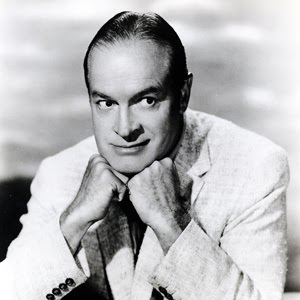 (Hope in Aleister Crowley pose. Hope was MI-6 agent. MI-6 set up CIA)
"Likewise, what better person to pick than Bob Hope to run messages worldwide? Bob Hope was British, and MI6 knew they could trust him. Bob Hope has an excellent ability to learn and say lines. Bob was...great with words, knowing how to fit them together and to make puns and double and triple meaning sentences. His ability to construct sentences with double meanings was a great cover for the hidden messages he transmitted for allied intelligence during the war. If you want to keep a secret the best place is out in the open..."

"Bob Hope. who was already a radio and movie star before W.W.II, was given wide publicity as he traveled all over for the U.S.O. . Bob Hope was 'just an entertainer,' and yet he visited Roosevelt. Churchill, Eisenhower, Patton, and all kinds of military men..."

"Bob traveled all over the world to every front during the war, including England, Africa, the South Pacific. the East & west coasts of the U.S. the Caribbean, Panama, etc. He could fit all kinds of signals into his jokes and talks, and no one would be the wiser. Under the disguise of building morale by being a comedian, Bob could go anywhere and because he always was making jokes, no one took him seriously. 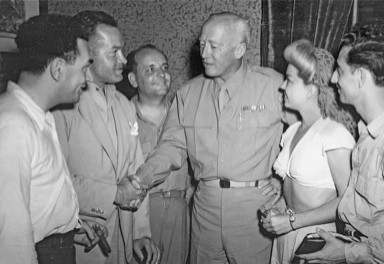 (Bob Hope and Gen George Patton. Readers differ over whether this is a Masonic handshake)
"Bob Hope was a courier, a message bearer of coded messages...Sometimes the coded messages almost seem to jump out when you look at his wartime talks M16 and MIS's Section BIA under the supervision of London's W Board and 20 Committee oversaw the running of double agents and mind-controlled couriers and mind-controlled spies. Special Intelligence Service (SIS) for the British dealt a great deal with mind-control of all types..."

The Bob Hope example is a perfect one. The brash "in plain sight" motif of the Illuminati is a powerful tool, getting their message across while neutralizing opposition through cognitive dissonance. To be aware of the extent of mind control in our society is to be forewarned and armed.

Chapter 13: Let Me Entertain You from Brice Taylor Thanks for the Memories
"At this particular show where Bob Hope bought me, there were lots and lots of little girls and boys competing. They said these children were what they called  sponsored" if they were chosen. And they said it was better to be chosen early because then the sponsors (owners) could mold you the way they wanted. There was a modeling ramp where all of us children were displayed. I modeled casual clothes, then sophisticated evening clothes, and then sensual/sexual attire and, finally, appeared totally naked. First I performed Swan Lake Ballet in pink feathers for my casual and wore black velvet for my formal and my naked performance was called "the tiger dance." I won first place at this show and was sold to Bob Hope on the open market. They put a white cape around my naked body and Bob came up and stood with me while everyone in the audience cheered. Somehow it seemed like a sport for some of these people to attend auctions. Then I was seated again next to my father. When the whole show was over, an older man dressed in a tuxedo came and escorted me to Bob Hope who shook my hand and said, "Hiya, Honey. Do you know who I am?" "Yes, Mr. Hope." I answered like I had been instructed. "I'm going to be your man, but we'll have to talk more about this later ... when you're a little older." He laughed. I smiled at him and said, "Thank you, Mr. Hope. My father will be very proud."
Continues here -scroll down

You may not know this, but there are two versions of the film Apocalypse Now. I got the uncensored, longer version inadvertently, and noticed that it contained at least two extraordinary scenes. One was a scene with embittered French heroin dealers/addicts who claimed that the US backed Ho Chi Minh and the Vietminh to grab France's opium trade in Indochina, among other things. (Some credibility to this claim). The second scene was one set in a crashed Bob Hope USO plane in which it was made crystal clear that Bob Hope was essentially a pimp. You might find the uncensored version interesting, if you can get it.

This is in response to the Bob Hope Illuminati article you posted recently.
I watched a collection of Red Skelton's shows on DVD about a year ago (bought at Walmart).
At the end in Red's bio was a reference to Red Skelton being a member of the Freemasons.
Just a piece of the puzzle you might not have known about.
The Freemasons motto is "Out of chaos, Order." I would translate it as: "Out of Baphomet's chaos, comes Baphomet's order."
New World Order. Mark of the Beast.
The Bible's Book of Revelation appears to be an extremely accurate prophesy of just a few more years from now.
One example is the ability of the entire world to see and celebrate the death and resurrection of two prophets in Israel.
Remember Desert Storm? I stared at the television screen (CNN) for hours while that was going on.

Bob Hope ... and he wasn't very funny either.

Your current article reminded me of this feeling, sickness, whatever. And it really hits the spot. Cognitive dissonance is what is fed to us by the media, advertisement and entertainment all day. Putting facts and situations next to each other, that are totally different and in relevance range from absolutely ridiculous to a matter of life and death. Like telling about wars, catastrophes and killed people in the news and then in a second switching over to sports, lottery, traffic news, advertisement. And then in the radio beautiful songs about love, passion and despair, followed by commercial, money fixed, artificial breaks and stories form war, death and illness all over the world.

In case anyone doesn't already know, Bob Hope's regular attendance at Bohemian Grove was well known. That era of celebrities made the public aware of Illuminati associations and events which would have raised eyebrows, if guys like Hope and Sammy Davis Jr, Dean Martin, Frank Sinatra made light of it all with jokes and humor.

Illuminati Hollywood and Illuminati OSS made a movie starring real British agent Bob Hope as a British agent in "My Favorite Blonde" (1942) http://www.imdb.com/title/tt0035100/

Storyline: Larry Haines (BOB HOPE), a mediocre vaudeville entertainer, boards a train bound for Los Angeles. and meets a woman on the train... a blonde British agent who is carrying a coded message hidden in a brooch and is being pursued by Nazi agents.

This movie was a private *wink* to members of the 'club'. There's even a scene where Hope and the woman elude the Nazi spies by pretending to be with a crowd of drunk Freemasons on a tour bus, (if memory serves me).