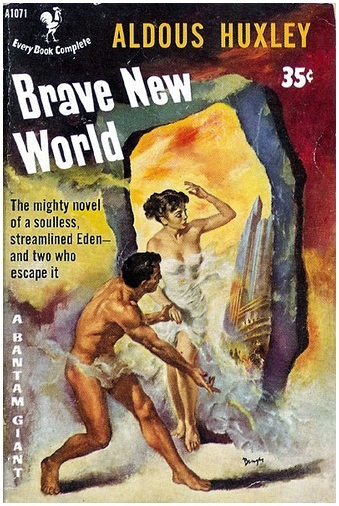 Aldous Huxley's "Brave New World" (1931) was not so much science fiction as prophecy based on the author's insider knowledge of Illuminati plans. We have the privilege of living in a world that is starting to morph into Huxley's.

In Huxley's "Brave New World" everyone is encouraged to watch television and consume the ubiquitous drug Soma. Soma is a hallucinogenic that replicates religious experiences, eliminating God and the need for religion. Soma and television are complementary.

TV is the most efficient means for brainwashing and controlling society. Television has a "magical effect", one of excitement, of induction of sensations of pleasure and inflaming the imagination. TV is not imposed by force on people; it is desired by the population.

Recreational sex is also an integral part of society. According to "The World State" (New World Order Government), sex is a social activity, not a means of reproduction, and sexual activity, including homosexuality, is encouraged from early childhood. Fertile women are conditioned to use birth control.

The maxim "everyone belongs to everyone else" (sexually) is repeated often, and the idea of a "family" is considered pornographic. Love and emotional relationships are rendered obsolete because they are no longer needed.

Marriage, natural birth, parenthood, and pregnancy are considered too obscene to be mentioned in casual conversation. Thus, "society has advanced to a new level of sexual comprehension".

The population is limited to no more than two billion people, and everyone is promised happiness. Natural reproduction has been done away with, and children are decanted and raised in "Hatcheries" and "Conditioning Centres." No more family relationship; no more mothers and fathers; no more grand parents, brothers and sisters; no cousins, no uncles and aunts, no more family.

In this "satanic idealization" of the human future, totally cut-off from God and healthy human nature, the population of the world is "unified" under "The World State", where the promise is an eternally peaceful, stable global society in which goods and resources are plentiful.

Society is divided into five castes. The highest caste is allowed to develop naturally while it matures in its "decanting bottle" (this is the cast of the the rulers), while the lower castes are treated to chemical interference to cause arrested development in intelligence and physical growth.

The castes are Alphas, Betas, Gammas, Deltas, and Epsilons, with each caste further split into "Plus" and "Minus" members. Each Alpha or Beta is the product of one fertilized egg developing into one foetus. The rest are clones obtained from the splitting of one embryo 96 times. One ovary may produce thousands of artificial children.

This artificial production of specialized children bolsters the termite-modeled programming of the society.

The "hypnopaedic process" is the process in which they teach the embryos all the lessons "THEY" want them to know. Children are conditioned from birth to value consumption with such platitudes as "buy a new one instead of fixing the old one", etc.

In The World State, people die at age 60 (people are "mind grafted" to accept euthanasia, -- premature death). Death isn't feared; anyone reflecting upon it is reassured by the knowledge that everyone is happy, and that society goes on. Since no one has family, they have no ties to mourn. 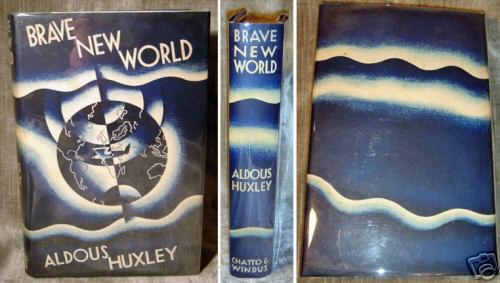 Interestingly, though Huxley's "Brave New World" was originally published in 1932, the illustration on the cover of the first edition dust jacket looks uncannily like the flag of the United Nations, below, which didn't come into existence until 15 years later.  Your readers can decide if this is just a coincidence, or, it was, in fact, all part of a larger plan
-- 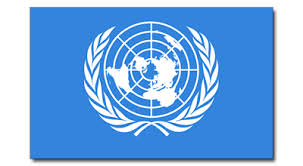 A woman from the U.K. asked me if I felt as trapped as she did by this evil world. I said, No, I feel all this evil world has done is trap it's self. This is just a strange world. I am just passing through.

Your quotation is very apt; have you noticed how all the talk of both the NWO profiteers and opportunists and their detractors seems to
almost always revolve about the Sacrosanct State and the "state of the nation" as the ultimate justification of all policy and the means
by which people are discriminated against worldwide; from Alex Jones' talk of freedom coming from the eternally courageous reformers in
the USA first, followed by others second to Metropolitan Jonah of the Orth. Church of America (OCA) in his Easter homily of 2009
concerning America and its commitment to freedom, especially jurisdictionally. Also any outsider from this collective citizenry
can discern the blatant global caste element implied in all this captivating yap that issues from people who think they are very free.

Not to be able to be part of a family, or to have a loving relationship, and to be divided into a caste system is not a mild dictatorship to me. It sounds more like pure hell.
Can you imagine what life would be like without loving parents? I refuse to be seduced.

“It is perfectly possible for a man to be out of prison and yet not free – to be under no physical constraint and yet to be a psychological captive, compelled to think, feel and act as the representative of the National state, or of some private interest within the nation wants him to think, feel and act…. The nature of psychological compulsion is such that those who act under constraint remain under the impression that they are acting on their own initiative. The victim of manipulation does not know that he is a victim. To him, the walls of his prison are invisible, and he believes himself to be free. That he is not free is apparent only to other people. ” - Aldous Huxley.