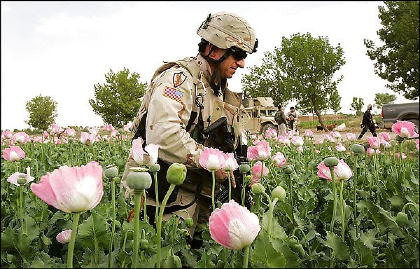 (left, US soldier tends to the crop)

Those  poppies really celebrate the 350 years of  satanic banking cartels who earn money from fostering wars and pushing drugs. They are laughing at us for celebrating our own destruction by wearing their opium badge, the red poppy.

[Editor's Note: These are the recollections of an elderly English patriot who was associated with British Intelligence.]


By T. Stokes (in London)
(henrymakow.com)


The English Civil War was fought when Oliver Cromwell was financed to attack King Charles 1st and his supporters by two Dutch Jewish moneylenders, Fernadez Carvajal an expert in military procurement,  and Manasseh Ben Israel a large project moneylender.

They said they would make Cromwell a very wealthy man and after the war was over he could then install his favorite brand of Christianity, and then unsurprisingly,  in 1643 all the Jews were duly allowed back into Britian after being expelled by King Edward 1st in 1290 under the 'Stautes of Jewry' law forbidding charging interests on loans.

In 1646, the history books tell us of King Charles was told to show a white goose feather at each round head stopping  point to ensure his safe passage across enemy country. This white feather was used again 400 years later by Jewish women to accuse service-exempt young men, some just schoolboys, of cowardice in two word wars.

Contemporary accounts say Cromwell did not want to execute King Charles,  and spent the night before it in anguish and prayer. Nevertheless Charles was executed in 1649.

In Ireland too Cromwell a puppet of the money-men, caused deep rifts in the differing Christian sects by his ruthless oppression of any dissent, ensuring no healing of these divisions could ever occur.

The Bank of England was established in 1694 by these foreign moneylenders and the East India company. After Clive of India's victory at Plassey India in 1757, the East India company had direct rule over India's richest province of Bengal. They tripled the local land tax causing a famine that killed 10 million people, or one third of the local population. British ships were soon distributing 2000 chests of opium from local poppies each year, and in 1793 Indian poppy growers were forbidden to sell to anyone else.

The company ensured that vast amounts of poppies were grown to export opium to China, and the East India company grew very rich, and in 1773 Warren Hastings brought all opium production under British Bank of England  monopoly, and while 17 million Chinese died from addiction,  the Bank of England prospered.

1856 was the year that the East India company funded the creation of the 'Opium Trust' now known as 'The Skull and Bones'.


HOW MUCH MONEY IS ENOUGH?


Rothschild who took over the entire British economy after the battle of Waterloo when he funded the war effort of both Britain and France. They are said to own half the worlds wealth, and were behind both the French revolution and the Russian revolution.

Sir Anthony Blunt said repeatedly when questioned by British Intel that Guy Burgess recruited both him and Lord Rothschild to the Communist cause, but this is a downright lie. In his later years, under the influence of a hospital anesthetic, he blurted out that Rothschild convinced them that when Rothschild's Russia ruled Britain, those that helped would be given positions of great power, and the rest of the country would be an economically destroyed wasteland.

Kim Philby on his arrival in Russia was horrified to find things very different from the high position he was promised, and taking to alcohol begged the British embassy for a reconciliation. Rothschild pulled strings to make sure none of the traitors ever came back and talked.

A hundred years ago England was the wealthiest and most powerful nation on earth, but the wars this past 100 years are said to be responsible for 35,654,000 deaths from conflict alone, bankrupting the country and making the banks filthy rich beyond belief.

USA TODAY revealed that US forces in Afghanistan now supply 90% of the worlds opium, this is blamed on the local Taliban, who say continually drugs and alcohol are not allowed and imbibing of either in their strict Muslim society  has stiff penalties,

The people who own the banks control the government which is why instead of the banks bailing out the people, the people bail the banks, these moneymen manufacture boom and bust. They cause depressions and recessions by just holding money in bank vaults. This is always done throughout history before being released to fund a war.

It does not matter whether you vote Conservative or New Labour, Democrat or Republican the banking faces behind the scenes are always the same and Rothschilds is the bankers bank, the name behind the scenes for the most despicable manufactured evil, massive suffering poverty and spent lives taken for the profit of the few.

Rupert Murdoch recently exposed for massive telephone tapping mail intercepts and postal vote rigging, is funded and controlled by Rothschild  who is pushing for more wars on Iran, Syria, Lebanon etc to give the entire Middle East to Israel under the 'Road map' fought of course  not with their own but our soldiers.

So all these campaigns are bound to fail that want to bring home the troops fighting in these spurious government  wars who protect and distribute  the opium crops.

When you see this Remembrance Sunday all these old soldiers and others wearing their poppies, you should know they are really celebrating the 350 years of the satanic banking cartels. They are laughing at us for celebrating our own destruction and wearing the opium badge of the drug running bankers, the red poppy.

Shakespeare says in The Merchant of Venice; 'truth will come to light, murder cannot be hid for long' and people all over the world are beginning to ask questions. Those heroic young men in two world wars who joined up to defend queen and country to find they were really fighting for a corrupt government and its bankers are no doubt lying very angry in their graves.

I suggest that Oliver Cromwell descended from Marranos that fled Spain during the Spanish Inquisition. In fact, the shores of England were a favorite destination of crypto-Jews. That is why Freemasonry began there as a way of mimicking the brotherhood intrinsic to openly practicing Jews.

Initially, The Marranos closed Freemasonry to Jews in response to rabbinic rejection of Marranos attempting to re-enter the fold. Years later, in 1666, when mainstream Judaism embraced the messiah ship of Shabbatai Tzvi the Marranos could only watch the excitement from the sidelines.

After Shabbatai Tzvi's apostasy, mainstream Judaism turned their back on yet another "redeemer." Though initially despondent at the unexpected turn of events, Shabbatai Tzvi would become the darling of Marrranos and crypto-Jews around the world, particularly in England. It is no wonder that the City of London is the epicenter of Shabbatai Tzvi's global kingdom.

As for the Rothschild's (who are likely Shabbatai Tzvi's direct male descendants) how can it be said that they own merely half the world's wealth. They and their network linked by "messianic" DNA, own the Global Central Banking system. Wealth as far as they are concern is a farce wherewith they control the rest of us!

To this day, the Jewish world remembers Shabbatai Tzvi as a grand but yet "false" messiah. The Sabbatean's are just fine with that time-worn moniker. The last thing they need is even a vague understanding of just what is going on. There is nothing more amusing to a Rothschild than the notion of Shabbatai Tzvi's failed messianic mission.

And while we're on the subject. The Holocaust, more than anything else was Sabbatean payback to the descendants of the Jewish infidels who dared turn their back on the messiahship of Shabbatai Tzvi. The Sabbatean Rothschilds and their network harnessed and manipulated the German people to settle an old score. Afterwards they re-established Israel's sovereignty as the messiah was meant to do. No one said it would be done in his lifetime. As Solomon completed David's temple so the children of Shabbatai Tzvi completed his global kingdom.The global central banking system replaced the treasury of the Temple of Solomon as the focal point of power on the global scale.

The truth is indeed stranger than fiction.

Anyone wanting to take a deeper look into the ugly drug affairs of banksters, and how Jewish masonry as B'nai B'rith and Jewish organizations as JDL, are active in shielding such criminality should read the 1978 book "Dope Inc", by the LaRouche organization. The book can be downloaded here as a PDF (you have to change orientation to the right in your browser to have the same correct:
http://www.archive.org/details/DopeInc.

Also, there are more angry people than the dead soldiers of the two world wars. A certain murdered Russian Royal family is certainly having a large grudge towards a, now also dead, Jewish bankster:
http://www.henrymakow.com/jacob_schiff_ordered_murder_of.html