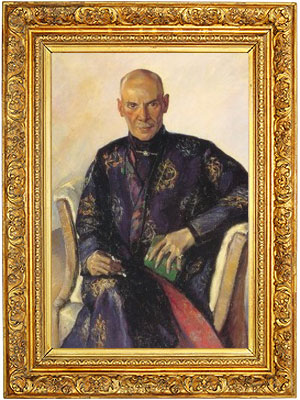 "In 1903, they knew that an oil reservoir emptying into the oceans would become an apocalypse and could destroy the entire earth."

(Translated by "Idiot Savant,"  from a German website "Kopp Online")

In 1903, Austrian banker, writer and occultist Gustav Meyrink (left, 1868-1932) wrote a novella, "Petroleum, Petroleum", part of a collection of short stories, which featured this Preface:

"To assure priority of this prophecy, I state that the following novella has been written in 1903. Gustav Meyrink".

The novella tells the story of Dr. Jessegrim who has made a fortune in the mescaline business.

He decides to go into oil.

All of Mexico was standing on caves which were partly at least filled with petroleum, and connected with each other. Jessegrim resolves to blast away the separations between the caves. After the last detonation, the oil was to flow from the underground deposit in Mexico into the ocean and form a glass surface, which continues to grow, taken by the gulf stream, soon covering the entire Atlantic surface. The coasts were barren and the population retreated into the interior of the land.

Instead of being arrested, in Meyrink's story, Jessegrim is hired as a consultant. He says: "If the oil continues to spill as it does, it will have covered the oceans of the world in 27 to 29 weeks and there will be no more rains, ever, as water can not evaporate anymore. At best, it will rain petroleum."

First widely criticized, this prophecy (of Dr. Jessegrim) becomes increasingly plausible as the hidden flow does not stop, and when it increases dramatically, panic grips humanity.

In Meyrink's occult circles, they were fantasizing about oil reserves  gushing into the ocean, from the Gulf of Mexico, covering the oceans.

They postulated that an oil reservoir released into the oceans would be an apocalypse and possibly destroy the entire earth.  It would start with a huge explosion. The culprit (a Dr. No figure,  "Dr. Jessegrim") is motivated by blind hate of humanity. He destroys humanity via a "wrath of god" - the oil catastrophe.

Unlike dystopian stories like "1984" by George Orwell or "Brave New World" by Aldous Huxley, who made no such claims, Mayrink called his story a "Prophecy". At the beginning of the story, he states quasi in notary fashion:

"To assure priority of this prophecy, I state that the following novella has been written in 1903. Gustav Meyrink".

With the discovery of his prophecy concerning the oil catastrophe in the Mexican Gulf, Meyrink could become posthumously famous in 2010. The best-known story of Meyrink is "The Golem" (1915), one of the Cabalistic   treatments of the golem-saga where rabbis breathe life into a clay monster who vanquishes their enemies.

Meyrink ran a banking house between 1889 and 1902 and circulated his entire life in the occult world of Christian and Jewish mysticism, theosophy and alchemy.

He was a member of the very influential Hermetic Order of the Golden Dawn, a British secret society active at the end of the 19th and in the early 20th century. Its members included the Satanist, occultist, Cabalist, magician Aleister Crowley, a Freemason of the Old and Accepted Order of the Scottish Rite. He called himself "The Great Beast 666". It means that Meyrink was frequenting circles which welcomed the Apocalypse, which is exactly what he describes in "Petroleum, Petroleum": An apocalypse. And a planned apocalypse.

Around 1900, the "magician and mystic" Aleister Crowley, in reality a drug-addicted megalomaniac, traveled to Mexico. It has always been known that, due to the lack of real magic, one had always to help things along, which is why the only real background of magic is illusion - the representation of magic.

Until now, every magician was really an illusionist, who interprets a natural event as magical. Or, an illusion as a natural event (see the attacks of 9-11). And while some developed an honest and entertaining art form out of this, others insisted on selling their illusions as real magic or natural phenomena.

Meyrink was frequenting such circles. Not only the Hermetic Order of the Golden Dawn, but also the "Germania" lodge, the first lodge of the Theosophist Society. It was founded by (widely regarded con-woman) Helena Petrovna Blavatsky, who also founded the magazine "Lucifer".

Meyrink eventually realized that the so-called "séances" for contacting ghosts from the other side were "almost entirely relying on tricks or self-deception".

One needs to point out that back then, people apparently fantasized about oil reserves spilling into the oceans, and doing so in the Gulf of Mexico.

Additionally, they believed this would become an apocalypse and could destroy the entire earth.

In Meyrink's story, the perpetrator is motivated by blind hatred of humanity: The destruction of the "crowd" was seen by Meyrink/Jessegrim as possible only through a "god-given scourge" - meaning, the oil apocalypse.

Makow Note: I posted this information because it is pertinent that Occultists have been considering this form of attack for over a hundred years. I don't know what, if anything, is going to happen.

Reports of "Nightmare Scenario" in Gulf

End of Life as We Know It?

The Gusher & The NWO Agenda

Have been having similar thoughts to those "Johnny" expresses below. It may very well be getting to nitty-gritty time. This could be "plan B" of the big money boys because their stealth plans have been exposed and are losing momentum rapidly.

Johnny is probably Canadian or British by his spelling of tons (tonnes) but I live in the path of many storms from the gulf. We'll soon see just how effective these bastards are at poisoning the world. Even though many are satanists their plans are of naturalist thinking so they never count on God foiling their plans with supernatural power, but that raises the questions: In the case of the U.S., why should He interfere? Are Americans godly? Hardly. Not even most who call themselves "Christians." Mostly they are what Rev. Denis Fahey calls Judeo-Puritans, his accurate definition of the creators of capitalism whose true god is the business bottom line

The so-called "dispersant" COREXIT is classed as a neuro-toxin,a nerve-poison. It is 50% lethal in doses of 2.6 p.p.million. Blended in oil it becomes 11 times more toxic. Thousands of tonnes of it has been distributedin the oil , in spite of warnings and in spite of it being only the 4th.most efficient dispersant. That, and the oil-fumes- are evaporating under the "fierce" Sun. The winds in this area will take it over the American continent - where it meets with the Aluminium, Barium, Strontium and various organic materials. Is the American govenment worried about the health of the PEOPLE - and warning it? Or is that only a concern when it can be exploited?There are too many co-incidenses here; some of the most alarming are the hundred-thousand white vehicles positioned at run-ways and the millions of 3 -person-coffins found at the many hundred Fema-camps.Was the choice of Corexit no co-incidence at all?Has any scientist given any prognosis of what will happen when this chemical chaos happens- NOW???

[This] is yet another very strange example that again makes me deeply wonder about this sinister folk of Theosophists, Rosicrucians, Freemasons and the like. If one just looks at the photographs of people like Meyrink, Manly P. Hall, or others, their eyes literally make one's blood run cold (a little collection of portraits is attached to this mail). - The mainstream of today has no idea how pervasive the ideologies of both Theosophy and socialism were by the beginning of the 20th century and thus were instrumental for the unfolding of the history of that century right to this day. Freud might have been a covert occultist (we don't know for sure), but C. G. Jung definitely was a Theosophist, as were Maria Montessori, Mahatma Gandhi (he read his first Bhagavad Gita in an English translation given to him by English Theosophists when he was studying in Britain), Albert Einstein (at least a sympathiser), Hermann Hesse, and more and more and more. What about Paul Gauguin? What about Franz von Stuck? What about Richard Strauss? Or Vassili Kandinsky? Or Scriabin? What about all the painters, designers, and architects of the earliest 1900s, with their "Secessionist" resp. Art-Nouveau resp. Art-Deco art and architecture, that so clearly breathes that same spirit of Luciferianism?

The whole political and cultural establishment of mainly the late 1800s and early 1900s was either absorbed by Theosophy or Socialism, the two revolutionary cousins that are two heads of one and the same Hydra and hold one and the same goal. Lee Penn's "False Dawn..." is an excellent study on the present activities of that force; what would be interesting, though, would be an historical work on the close links - more than that: the secret alliance - between Theosophy and Communism right from their beginning, proving their identical roots as well as objectives. -

As, now, especially in the form of the Green Movement, the two streams are about to powerfully unite. 30 years ago, the Greens were much ridiculed and far from being taken serious. Now, more and more people realize that the Greens should have rather been taken DEADLY serious; as, that's what they are: the deadly spearhead for ultimate Luciferian world revolution merging the New Age movement and all its diverse substreams with "good old" communism. The Theosophists (as well as the environmentalists) have gone political, just as the communists (take M. Gorbachev!!!) have gone "spiritual"... - Everything is now in its last phase of most dangerous finalization...

As for the last news about the oil spill saying that this could possibly go on for another 4 (!) years, the situation seems indeed to increase into a fairly apocalyptic scenario. I don't believe in an accident, and given the fact that this oil-rig blew up on Hitler's 121st birthday (121 is the square of 11, that number that seems to be so popular among Satanists), makes one wonder who could be behind this and with what intention. First, it will massively damage BP. Second, it will destroy the whole maritime habitats of the Gulf of Mexico and possibly beyond for a long time. Third, it will give communist Obama the argument for cutting down U.S oil production and thus increase on a long-term perspective the United States' energy dependence on imports not only from the Middle East but ultimately also from Russia, that has frequently declared to be confident that they will be the Saudi Arabia of the 21st century. Fourth, this will now reinforce the demand for heavy CO2 taxation so to discourage the use of fossil fuels (and that's probably the most important point); thus, this catastrophe could well have been unleashed to reach the very political objectives that last December's Copenhagen Climate Change Conference was meant to bring about (and, luckily, didn't).

It's so obviously about most radical economic "contraction" - and, finally, about the most insane and largest depopulation programme in the history of mankind. As can be read on the Georgia Guidestones: "Maintain humanity under 500,000,000 in perpetual balance with nature." It's SICK, it's EVIL, and, as we can see: it's already HAPPENING right in front of our eyes...