(Levant, 37, is a Jewish Canadian lawyer, journalist and politician who gave up his safe seat in Parliament so Stephen Harper, the Prime Minister, could run there. This article provides another example of  historic Nazi-Zionist cooperation designed to coerce Jews into backing Zionist policies. Ultimately, these policies advance world government by the Masonic bankers who sponsor Zionism,which is also a Masonic order.)

In 1965 and 1966, the Canadian Jewish Congress helped organize the fledgling Canadian Nazi Party. That sounds crazy, but it's true, and I wrote about it in Shakedown, my new book about Canada's human rights commissions.

In a letter to the editor in the Citizen last week, the CJC's current co-president, Rabbi Reuven Bulka, called my book's description of the CJC's role "fiction." He said all the CJC did for the Nazis was buy them a bottle of rum.

It's true that the CJC did buy drinks for Nazis in the 1960s. That's pretty strange in itself, and I'd like to hear more of Rabbi Bulka's thoughts on spending Jewish charitable donations that way. But the CJC did a lot more than that: they hired an ex-cop named John Garrity to go to work for the Canadian Nazi Party.

Garrity helped organize that rag-tag band of losers, though they never amounted to anything except for fodder for the press.

There were only a dozen active Nazis when Garrity joined them and they weren't really a political party. He called them "harmless misfits," and they were -- their leader, John Beattie, was a nervous, gaunt, unemployed 24-year-old clerk who spent much of his time dodging angry Jews who tried to beat him up. (One of Garrity's jobs was to help Beattie escape street fights.)

Garrity brought more than just rum to the Nazis. He brought with him pretty much the only organizational talent the group had. They put him in charge of membership. Garrity called himself the "Heinrich Himmler" of the party, and a "Nazi leader for the Jewish Congress."

Of course, Garrity helped his paymasters at the CJC, too, giving them information about the names of party members and donors. And when Garrity finally quit the Nazis, he wrote a tell-all about his adventure in Maclean's magazine.

Garrity larded that report with personal insults toward Beattie and the Nazis. But he did acknowledge that they had never done, or even contemplated doing, anything illegal. All of the violence he witnessed was directed at Beattie, usually by Jewish vigilantes. "Sadly, it is the ... anti-Nazi extremists who, in their attempts to destroy Beattie, provide him with most of the publicity he craves. If it weren't for the riots and the assaults and the public protest meetings they hold, there'd be no real news in Beattie," Garrity wrote.

And that is the importance of this story and why I put it in my book about human rights commissions. Beattie hadn't done anything illegal. He was just a loser who believed in a discredited ideology. But the CJC wanted to bring in political censorship laws and I believe they needed to build up the threat to persuade Parliament to abridge Canada's freedom of speech.

Garrity puffed up a group of Nazi nobodies into a national menace, first through organizational support and then through spectacular media publicity. And, sure enough, Parliament enacted section 13 of the Canadian Human Rights Act, which censors offensive speech. 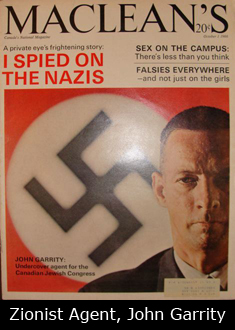 He became the boss, turning the Heritage Front into Canada's leading white supremacist group. This time it wasn't just Jewish money that was spent propping up neo-Nazis -- all taxpayers paid for it.

Which brings us to the present day -- and back to Rabbi Bulka and the section 13 censorship law. Canada's largest customer of section 13 is Richard Warman, who has been the complainant in all but two cases heard by the tribunal this decade. The CJC was so impressed that they gave Warman an award.

But, in a stunning human rights tribunal ruling last month, Warman himself was rebuked for posting anti-Semitic comments on Stormfront, a neo-Nazi website, including a message calling Jews "scum." Warman has stated that he was attempting to gather information on real Nazis, but the tribunal called his actions "disappointing and disturbing," and ruled that he risked encouraging more hateful messages himself.

Warman's actions appalled the tribunal, but apparently not the CJC. Just as the CJC did with Garrity, Nazi opponents continue to stir up neo-Nazi incidents -- as if there aren't enough real threats to Jews as it is.

Perhaps Rabbi Bulka can explain that one, too.  (End of letter)

I'm pleased that the Citizen gave me so much room to reply. In doing my research I found out a lot more about the CJC's role in building up the Nazi Party -- one of the craziest stories I've ever come across. I think it's fascinating from so many angles: politically; religiously; legally; historically. It really is stranger than fiction. I think there's enough material there to form an entire book in itself -- especially when added to the CJC's discreditable conduct in the Grant Bristow affair, and their ongoing, unseemly relationship with Stormfront member Richard Warman. Incredibly, the CJC still stands by Warman even after the Canadian Human Rights Tribunal condemned him for his anti-Semitic propaganda. You'd think that would be something the Jewish Congress might care about.

My only quibble with the Citizen is with the headline they put over the op-ed: "Neo-Nazis are best simply ignored". I don't believe that and that's not the message of my op-ed. It's a false dichotomy to set up the only two alternatives as "ignoring" Nazis, or doing what the CJC does (building them up, then getting the government to prosecute them). I think there are plenty of other options, such as rebutting and debating neo-Nazis, campaigning against them, teaching against them, politicking against them, etc. That takes more work than the lazy CJC would do -- they're too busy campaigning against global warming.

"The main point again, if I may, is that throughout this whole exercise in Zionist propaganda and mind-control, we are seeing, as is par for the course, Zionist Jews playing the lead roles in both sides of this seemingly controversial battle over Section 13(1). Levant is a Zionist. Asper is a Zionist. Bernie Farber is a Zionist. An unholy trinity of vipers out to bewitch the public with their sophistry and media magic, aided and abetted by their crypto-Zionist supporters (the “dummies”) who have no real idea what the Big Picture is all about.

At the end of the Levant rant we see the same old hatred spewed forth against the Germans just to remind those readers (again) who may have forgot their daily Zionist catechism of the Great Persecution and the Holocaust and “gas chambers” and Cotler’s “New anti-Semitism” creed now being slipped surreptiously into the Zionist culture we tend to think of as being truly “Canadian”."

The Zionists and their Anglo henchmen have foremost in their mission the desire to eternally denigrate the German people, thus preserving their myth of the 'good war', which they then milk for any subsequent wars, including trotting out the veterans for use as political props.

Great article , I have been wondering if it's the same scenaio with this new group called 'The Aryan Guard' (or Aryan Tard as I call them). I'm puzzled by the fact that they solicit donations yet they seem to have deep pockets when it comes to having recruits migrating to Calgary and supporting them. They also have their marches start at Mewata armoury (government) and end at Calgary city hall (government), with police protecting them the whole way (They need protecting from a bunch of scrawny hippies?). They then board busses and make their escape . This happens every March 21. What do you think of this?

I completely agree with your assessment that we are engaged in a spiritual war and that one of the solutions is to "detach" from this world for set periods of time. All major religions and teachings have created methods and techniques for this detachment to occur (prayer, meditation, yoga etc). The battle between good and evil is essentially a battle of self control and the ability to resist addictictive habbits and temptations.

As a practicing Muslim, I tell you that Islam, for example, has a very strong awareness of this fact and thus applies strict "detachment" rules which can be divided into short term short "take a breath" detachment intervals and longer-term "complete detachment" methods as follows:

-5 Daily prayers which total about 30 minutes of meditation daily spread out from sunrise to sunset to cover a large part of the day
-1 month annually of fasting from food and water and all desires of the senses in order to train detachment and assist the Souls to control the mind and body (from sunrise to sunset)
-Frequent visits to the Kaaba in Mecca for one week to 10 day "meditation rituals" which we call Omra and Hajj (by the way, the Kaaba has been proven to rest in one of the strongest energy points on Earth where some of the most powerful lay-lines intersect. This provides an enhanced spiritual experience).

These rules are extremely effective in putting the mind at ease and "changing the energy" of the person if I may say so during the busy, stressful days of the 21st century.I encourage everyone to find whatever detachment method suites them best and dedicate a fixed time daily for this to achieve best results.

The powers of evil have always sought to enslave humanity to desires, machines, money and anything else they control directly or indirectly. The most effective resistance method in my view is to turn your back to all of this and realize that we are living in this world but for a brief moment in time before we move on. We will not take any of our physical materials along with us so why do we care so much?

Thank you for always reminding us that good people from all religions will always unite to resist evil.

The story on the z's creating tha nazi's is just about the wackiest one yet. But now it all makes sense.

I guess the joke is on the discontented Nazi wanabees out there. They can't even get organized and funded with out Khazar and tax payer help... Shamefull!

I think perhaps it's time to only call sephardic jews, jews. Ashkenazis ought to be known as the eastern european/ central asian gentiles they are and shed all sham and pretense. Perhaps they could embrace Christianity, after all anyone can become a Christian.