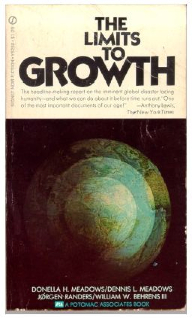 The real purpose of the elite environmental movement is to build the structures (political, economic, ideological etc) of the ultimate monopoly: a corporate-communist world government.

The Club of Rome is a key think tank of the United Nations and the elite environmental movement.  Members include such NWO fixtures as George Soros, Henry Kissinger, Bill Gates, Zbigniew Brzezinski and Queen Beatrix of the Netherlands.

Experts from a wide variety of disciplines (academia, religion, government, business and the media, etc) all meet at the Club's headquarters in Winterthur, Switzerland to realize their masters' demented dreams. They generate the global warming hysteria that saturates our media and write legislation that bypasses national governments.

On their website, the Club admits authoring policy for, 'GLOBE International, an organization of senior legislators from the G20 countries.'

Their manifesto is a 1972 book, The Limits of Growth. The book argues that because of dwindling resources, the world needs to embrace zero growth in economy and population. The book was given enormous media coverage and reportedly sold 12 million copies worldwide.

However the book is a tissue of lies. As Professor Julian Simon put it, The Limits to Growth has been blasted as foolishness or fraud by almost every economist who has read it closely or reviewed it in print."

Even Club members admit their findings are fraudulent. In his Book, Science Under Siege, Michael Fumento quoted Club of Rome member Timothy Wirth as saying, "We've got to ride this global warming issue. Even if the theory of global warming is wrong, we will be doing the right thing in terms of economic and environmental policy."

The real purpose of the establishment environmental movement is to build the structures (political, economic, ideological etc) of the ultimate monopoly: a corporate-communist world government.

As Club of Rome member Mikhail Gorbachev puts it, "The threat of environmental crisis will be the 'international disaster key' that will unlock the New World Order."

In his book The Rockefeller File, Gary Allen says the Club was created at the Rockefeller family's private estate in Bellagio, Italy.  He describes the scene:

'Fifty key businessmen and international bankers coming gathering under the auspices of the Rockefeller family and coming to the conclusion that production in America should be reduced! ... It is your standard of living they are proposing to decimate, not their own.'

To give you an example the machinations of the Club of Rome I will summarize a chapter from their book 'The First Global Revolution' (1991) entitled 'The Vacuum.'  The chapter describes how they have orchestrated a vacuum of meaning and order in preparation for a new green political paradigm.

'Thus a vacuum has been created, in which both order and objectives in society are being corroded.'

The Club is planning an authoritarian world government, so national democracies must go.  'The inevitable problems of phasing out democracy are difficult.'

Their solution is to erase the benefits of democratic government in the public mind. 'Democracy will be made to seem responsible for the lagging economy, the scarcity and uncertainties.' This will bring the very concept of democracy into question.

The plan has been working. 'The current mode of operation in western democracies are seeing their former role decline and public opinion drifting away from elected representatives.'

The media is used to achieve this goal. 'Respect for the political process has also faded owing partly to the media, leading to indifference if not hostility.'

These words bring to mind the MPs' expenses scandal in the UK that led to parliamentary resignations and public uproar. The damning documents were leaked to the media by John Wicks, a former SAS officer and the 'head of a corporate intelligence company' (I.e. privatized MI5).

The selfishness of political parties also turns us against them. They give the impression that 'party needs come before national interests.'

Our ensuing exasperation leads to 'indifference, skepticism or outright rejection of governments and political parties seen as having little control over the problems of our times.'

'"Nature," as the saying goes, "abhors a vacuum." And people, as children of Nature, can only feel uncomfortable, even though they may not recognize that they are living in a vacuum.'

'Men and women need a common motivation, namely a common adversary, to organize and act together in the vacuum.' A common enemy can be, 'either a real one or else one invented for the purpose.'

For lack of a real enemy, The Club of Rome dreamed up the terrors of global warming. 'In searching for a new enemy to unite us, we came up with the idea that pollution, the threat of global warming, water shortages, famine and the like would fit the bill.'

'All these dangers are caused by human intervention, and it is only through changed attitudes and behavior that they can be overcome.'

'The real enemy then is humanity itself.' This statement explains increasingly numerous articles in the mainstream with headlines like, 'Population control 'vital' to curbing climate change.'

The Club pays special attention to the degeneration of the US. They believe the American dream 'lost its credibility with the painful Vietnam War that deeply scarred the collective conscience.'

Attacks on US identity include, 'Hispanic migration, poverty within plenty, drugs, violence and AIDS and the fact that the "melting pot" no longer works.'

'Having lost its position of unique leadership in the world--a leadership compounded of generosity laced with Puritan values and cynicism worthy of the conquerors of the Far West--the American nation is plunged into doubt and facing the temptation, so often resisted and no longer possible in the global village, of withdrawing into itself.' 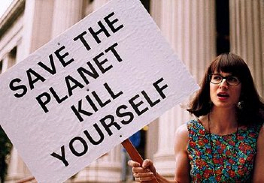 Living in a middle class English town is a surreal experience. The streets are clean, people drive nice cars, supermarkets are full of good food. People live an affluent lifestyle. And yet everyone looks miserable.

It is because we English live in a vacuum of meaning and purpose.

This artificial shell of a society never felt natural to me. And now I know it isn't. The Vacuum' reveals some important insights into the agenda.

- A societal vacuum has been created as preparation for the new green religious and political paradigm that will govern life in the NWO.

- There is a campaign to turn public opinion against national governments.

- Climate change is a con. The threat of an earth on the brink of implosion is intended to act like the all-seeing eye of Ra that kept common ancient Egyptians compliant to tyranny.

- Americans who still believe in libertarianism are enemies to the NWO.

There is a black hole at the heart of modern life. We need to recognize it before it's too late.

More on The Club of Rome